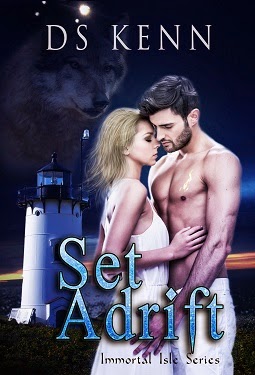 Set Adrift
Terric Blythe is a hybrid demon and wolf shifter whose life has largely been spent in anonymous cities, moving among people while keeping them at arm’s length. The list of those who matter to him is short, but when he cares, he does completely. He has allowed himself to love the one person who truly knows him.
Jordyn Kinsley is an achingly beautiful vampire, haunted by her past. Choices and chance brought her into a world filled with evil, tragedy, and loss. At her lowest point, she encountered Terric. She learned to trust him, her demon with the heart of a wolf.
Their anonymous life in New York made it easy for Jordyn to isolate herself. Realizing she needed a change, Terric found their new home in Provincetown, Massachusetts. The tip of Cape Cod, where paranormal beings live easily among humans, is filled with closely guarded secrets. As Jordyn begins to heal and discover her strength, it’s clear she will one day be ready to stand on her own. The wolf must decide if he will return to existing in solitude or if he will follow her lead and explore what life has to offer.
Set Adrift is a story of love and loss, of deeply abiding friendship, and of sacrifice. The Immortal Isle series will grab ahold of your heart and have you falling in love with the inhabitants of this small coastal town.

About the Author:
website-FB-twitter
DS Kenn lives in sunny south Florida, between city and swamp. When she isn’t spending time with family or working, she can be found taking care of a multitude of rescue animals and writing.
Set Adrift is her first published work, but she has been writing for several years. She ran a successful writing group on Facebook, which is where she developed the characters you will grow to love or love to hate.
Drop her a message on Facebook and let her know what you think of the book. There are sneak peeks and extra scenes to be found if you look close enough.

one bracelet says "Heading to P Town with Terric" the other says "My favorite demon is a wolf" and a nice pen! Head over to Riverina Romantics and win more Swag!