The Top Ten Wild Things in the Weird West

The Top Ten Wild Things in the Weird West

The west is weird in DARK ALCHEMY. Long-buried alchemical experiments surface to meet the local undead, warring with drug lords and cattle barons in the tiny town of Temperance. It’s an odd place…as the new stranger in town, geologist Petra Dee, is discovering. These are the top ten things this scientist can’t rationally explain away:

10. Calcinated bodies. A series of corpses are found, twisted like driftwood and calcinated in shallow graves. There are no witnesses, and the manner of death defies all logical explanation.

9. Raven spies. Ravens are thick in the skies around Temperance. They’re often seen in the company of the local undead, the Hanged Men. Many suspect that the ravens are the familiars of the Hanged Men, but the truth is much more sinister, as they seem to watch events unfold with an almost-human intelligence.

8. Phone calls with the dead. Petra came to Temperance to search for her missing father. While driving her truck, she hears his voice on the radio, warning her to run away. This is no radio deejay with a twisted sense of humor – she receives several rambling phone calls from her dad, and the calls are traced to the middle of the ocean. Not possible – but the disembodied voice knows things only her father could know.

7. The Eye of the World. Stained a glorious shade of turquoise by algae, this pool of water is said to be a window to the spirit world. Petra drinks from the pool – and falls headfirst into a hallucination about her missing father.

6. The Garden. In alchemy, the Alchemical Garden is the place in which the puzzle of immortal life is unraveled. In Temperance, the Garden is a dilapidated field around the local meth dealer’s house. This is the place where blood is drawn and hallucinations are made real.

5. The Venificus Locus. The founder of Temperance was an alchemist, back in the Gold Rush days. Remnants of his experiments are buried throughout the countryside. Petra finds a golden compass on the property she’s renting, and it’s more than a pretty artifact. It has the ability to detect magic, and it runs on fresh blood.

4. Coyote familiars. The only creature Petra can trust is a coyote who turns up at the doorstep of her trailer. It seems that the coyote is more interested in lunch meat than companionship, but the coyote has his own agenda. He’s meant to be Petra’s spirit guide, whether she believes in spirit guides or not.

3. Living mercury. Stroud, the local drug lord, does more than cook meth in the garden. He’s obsessed with the secret of eternal life, and he’s conjured several horrors to solidify his power. One of these is living mercury, bonded with his own blood. The mercury is armor, a weapon, and so much more.

2. The Lunaria. The alchemical Tree of Life is real, and it stands alone in a field owned by a ruthless cattle baron. Its roots twist deep into the earth, and its branches brush the sky. At the center of an underground warren of tunnels that reach into the very depths of the earth, the Lunaria guards the secret of the Hanged Men.

1. The Hanged Men. The local undead, the Hanged Men masquerade as ranch hands. Forever in the company of ravens, they must return to the Lunaria every night to decompose and be reborn. The magic of the Lunaria isn’t perfect – many of the Hanged Men are little more than broken automatons. But they will defend the tree against any incursion – whether from Stroud or Petra. Are they responsible for the murders? Or is something even more fearsome at work? Petra will have to puzzle it out…or risk becoming the latest victim in this string of weird horrors rooted in Temperance.
Read I Smell Sheep's
5 sheep review of Dark Alchemy 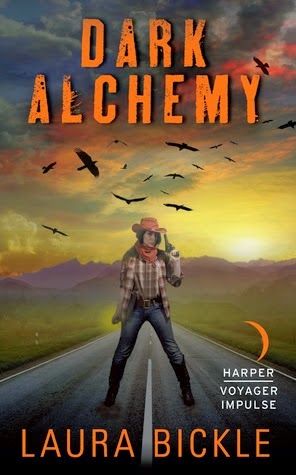 Dark Alchemy
By: Laura Bickle
Pages: 271
Urban Fantasy
Some secrets are better left buried...
Geologist Petra Dee arrives in Wyoming seeking clues to her father's disappearance years ago. What she finds instead is Temperance, a dying western town with a gold rush past and a meth-infested present. But under the dust and quiet, an old power is shifting. When bodies start turning up—desiccated and twisted skeletons that Petra can't scientifically explain—her investigations land her in the middle of a covert war between the town's most powerful interests. Petra's father wasn't the only one searching for the alchemical secrets of Temperance, and those still looking are now ready to kill. Armed with nothing but shaky alliances, a pair of antique guns, and a relic she doesn't understand, the only thing Petra knows for sure is that she and her coyote sidekick are going to have to move fast—or die next.

About the Author:
website-FB-twitter
Laura Bickle grew up in rural Ohio, reading entirely too many comic books out loud to her favorite Wonder Woman doll. After graduating with an MA in Sociology – Criminology from Ohio State University and an MLIS in Library Science from the University of Wisconsin-Milwaukee, she patrolled the stacks at the public library and worked with data systems in criminal justice. She now dreams up stories about the monsters under the stairs, also writing contemporary fantasy novels under the name Alayna Williams.

Her work has been included in the ALA’s Amelia Bloomer Project 2013 reading list and the State Library of Ohio’s Choose to Read Ohio reading list for 2015-2016.