Last night, the Elementals watched Fifty Shades of Grey together. Here are some of Flint’s quotes during the viewing.

“Is his ex-girlfriend Jean Gray from X-men?”

“Is this truly what women want? A rich, pretentious man?”

“She’s not very articulate for an English major.”

“Is the pencil a phallic symbol?”

“Hey, she didn’t finish her tea or muffin.”

“Nice Alice in Wonderland reference, with the drink me and swallow me notes”

“Why is he strapping her in so tight?”

“Is the red room soundproof?”

“Is there a bounce house in there?”

“...and this rod is called the penetrator.”

“Hey, didn’t he just break a rule? Get out the penetrator.”

“Have you ever played submarine and periscope? Tub sex, rocks!”

“Why do they keep saying, Laters, Baby?”

“I’d be skimming that contract. At about page 2, I’d be out. Bullet points, people.”

“So he’s transparent and she’s all wishy washy? I feel for the guy.”

So, Flint on a scale of 1 to 5 what would you rate the movie?

5 on the gal’s hot body. After living for 500 years, I’ve done all of those things and more. Kinky, dominant, submissive, all sex is hot sex. Count me in.

I’d give the guy a 5 on his clothing choices, too. He lit up those suits.

Right, but what about the movie overall?

Ask me after I watch with Violet. 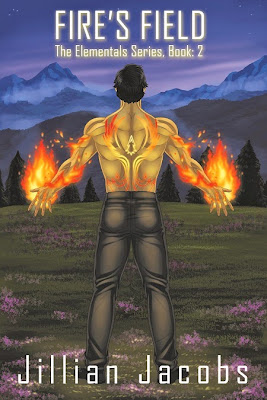 Fire’s Field (The Elementals Series #2)
Jillian Jacobs
Bound by a dark enchantment, only an elemental flame can light the way.
Vengeance
Forged in rage and sorrow, a dark witch’s spell travels down her ancestral line to Violet Levina. Enchanted with the power of the entire Electromagnetic spectrum—microwaves, gamma rays, radio waves, Violet is cursed with limitless energy and the obligation to destroy an insidious creature composed of dark matter.
Justice
For over five hundred years, Flint has served as Fire, aiding Earth’s environment and its people as one of four Elementals. Yet only once in his long existence has he been burned. A flaming redhead ignites the embers of his heart, but he finds her resistant to the heat building between them.
Illumination
Knowing she must fulfill her destiny, Violet travels to her ancestral home in Ireland, accompanied by the fiery Elemental. Not fooled by his charms and brazen demeanor, Violet wishes only to shield him from the coming battle, but can’t deny the flames of desire flickering when she is at his side.
Love
While standing together against unrelenting adversaries, false friends, family betrayals, and an underlying seed of darkness, they must burn bright or the ruthless power behind the ancient spell will turn everything to ash.

With Flint as her beacon in a field of darkness, Violet will discover that love holds the most powerful magic of all.

They were coming for her.

On the eve of her mother’s 25th birthday, a young witch fought back chills as the sounds of braying bloodhounds echoed through the forest. A single red stroke, mixed with the faintest purple, lit the darkening sky, as night, along with death, crept closer.

At the banks of River Nore, Sorcha rocked back and forth, tears of innocence-lost escaping down her cheeks. Heart splintering, she searched her memory for a spell to ease her mother’s torment. With her hands locked in the fabric of her mother’s woolen dress, she chanted pleas to the Goddess Isis to hear her cries and heal her mother.

The only answer came in the form of the demon’s sickness dripping from her mother’s mouth in a sludge of grimy gray mud.

Fear unlike anything she’d ever felt iced her heart, as once more she begged, swore her very life in exchange for the continued beat of her mother’s heart.

A piercing pain shot through her overburdened mind as the beast fought to break through her mental shields. Weakened by her angst and un-tested youth, she left a crack exposed, and the beast slipped in. Squinting her eyes closed, her entire body shaking with the will to deny the sick beast entrance, she couldn’t prevent his foul words from seeping through.

“Your mother paid for her defiance, for her inability to accept this gift only I could give her. Look at you simpering and shaking, if you weren’t so weak I’d use you, but no matter, I’ll be back.”

Drained from holding back the tempest, Sorcha let loose true sobs for the loss of the deepest love of her life, her solid fortress during every storm, the lyrical voice singing away her nightmares. Ignoring her drenched skirts, she released all her torment against her mother’s breast, barely catching the beat of her mother’s weakening heart between each aching moan torn from the depths of her soul.

No one came to her aid. No one soothed her broken spirit.

The sounds of the hounds drew closer, their howls a mad cacophony in her surreal world. The yellow-glow from fire-tipped sticks, created a mystical glow in the woods before her. Snaps and cracks of branches reverberated across the forest as the frenzied townspeople advanced to accuse and convict one of their own—a witch. 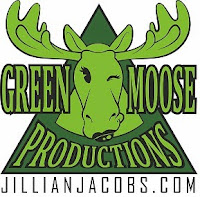 About the Author:
Website-FB-Twitter
In the spring of 2013, Jillian Jacobs changed her career path and became a romance writer. After reading for years, she figured writing a romance would be quick and easy. Nope! With the guidance of the Indiana Romance Writers of America chapter, she’s learned there are many "rules" to writing a proper romance. Being re-schooled has been an interesting journey, and she hopes the best trails are yet to be traveled.

Water’s Threshold, the first in Jillian’s Elementals series, was a finalist in Chicago-North’s 2014 Fire and Ice contest in the Women’s Fiction category.

Jillian is a: Tea Guzzler, Polish Pottery Hoarder, and lover of all things Moose.

The genres she writes under are: Paranormal and Contemporary with suspenseful elements.
Sharon Stogner at 11:00 AM
Share