Negotiation is the prequel novella for The Twelve Kingdoms series. Until now it was only available in the anthology Thunder on the Battlefield, Vol. II
Jeffe released this novella in ebook form this week, together with the official release of The Talon of the Hawk.

To celebrate the release of The Talon of the Hawk (book 3 in the Twelve Kingdoms series) and the rerelease of Negotiation, Negotiation will be free for a limited time. 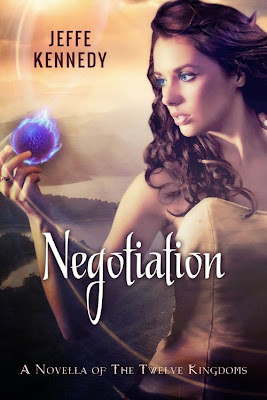 by Jeffe Kennedy
A Story of the Twelve Kingdoms

General Uorsin escapes the last devastating battle, only to find himself alone on a mountain, feverish and no closer to finding the paradise that drives him on. Salena, greatest shapeshifter and magic-worker of her people, springs the trap she’s set to protect her land—and to prevent the ravager Uorsin from ever reaching it.

Together, they spend a night setting the terms that will determine not only the rest of their lives, but the fates of the peoples of the Twelve Kingdoms—and the thirteenth.

About the Author:
website-FB-twitter
Jeffe Kennedy is an award-winning author with a writing career that spans decades. Her works include non-fiction, poetry, short fiction, and novels. She has been a Ucross Foundation Fellow, received the Wyoming Arts Council Fellowship for Poetry, and was awarded a Frank Nelson Doubleday Memorial Award. Her essays have appeared in many publications, including Redbook.

Jeffe can be found online at her website: JeffeKennedy.com, every Sunday at the popular Word Whores blog, on Facebook, and pretty much constantly on Twitter@jeffekennedy. She is represented by Foreword Literary.
Sharon Stogner at 12:00 AM
Share