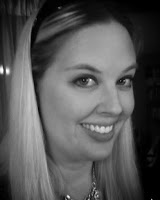 Today we have the lovely Krystal Shannan back. We interviewed her last year (here). Not wanting to bore her or you, we came up with some fun questions! Sit back and hear about the third book in her sexy Sanctuary, Texas series along with some other interesting things...

Sharon: Tells us a bit about My Eternal Soldier? What exactly is this Eternal Soldier?
Krystal: My Eternal Soldier is the next piece of the Sanctuary Texas saga. Readers got to meet Eira (kickass vampire) in the last book, MY DRAGON MASTERS, when she saved Diana from being killed. The oracles in town told her she was chosen to protect them, but she didn’t listen. She’s not really keen on taking orders, LOL. But now she needs help to save her friends and Sanctuary is her only choice, but it comes at a price. Oh, and did I mention that the love of her life is an immortal Elvin warrior who killed her a thousand years ago? Oh, and that he’s smok’n hot, broody, and rides a badass motorcycle?

*Sharon tries to keep her inner elf fangirling to herself*
twitch, twitch

Sharon: If a girl wanted to move to Sanctuary, Texas what would be some places to work, hang out and live to meet some sexy supes?


Krystal: Well, there’s Rose’s Cafe. That’s where all the gossip starts and ends, plus the Brownies that work in the kitchen make the best food on the planet. Pixies help out as wait staff, but they run the market across the street and can grow pretty much any fruit or vegetable the town needs with a little shake of faerie dust. You could also try out Calliope’s shoppe (also in town circle). She’s an ancient Greek siren who kills any man she falls in love with, but she makes the coolest clothes --- self-cleaning and personalized to magickally size themselves to fit only you.

Sharon: Do you hoard collect anything? (if you have a pic of your obsession that would be great!)
Krystal: I collect lizards. Not real ones, just decorative metal, pottery, beaded, rubber. When I first got married I had these little bitty rubber ones and one day I decided to play a trick on hubby. I glued one to the inside of a kitchen cabinet...the horrified yell later that evening when I sent him to retrieve plates was very rewarding. I have yet to repeat the scenario and accomplish the same results. Needless to say, he’s not a fan of my fake pets which I still leave lying around the house in odd places (on purpose) from time to time. 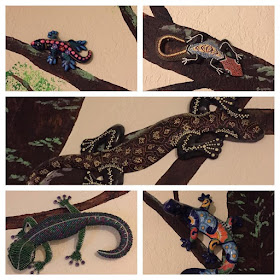 Sharon: What song(s) make you want to jump up and dance like no one’s watching?
Krystal: Shhhhh…. I don’t normally tell people this. But I love Taylor Swift’s SHAKE IT OFF. You know the youtube videos that float around FaceBook?...Yeah, those would totally be me in the car when nobody's looking.
Sharon: Me too! *whispers* Me too...<G> I'm digging her new song Bad Blood too.

Sharon: Show us what you would wear (dress, shoes, tiara…) on the Oscar’s red carpet (you know, when your book gets turned into a movie)? And who would be your date?

Green dress, silver shoes, but I’m not really a tiara kind of gal :-)

My date would always be my husband. But if I got to cast this book and chose the lead to play Killian, I would not be opposed to having Chris Pine on my other arm ;-)
Sharon: Thanks for the repeat visit! Let's head down to the dungeon where we can listen to some Taylor.

The Facebook party will be on June 5th at 6:00 pm CST. There will be giveaways and lots of fun so please let your followers know about this event!
Don’t miss the opportunity to win more prizes and learn more about My Eternal Soldier. Come join the party on June 5th! https://www.facebook.com/events/1400406676919927/ 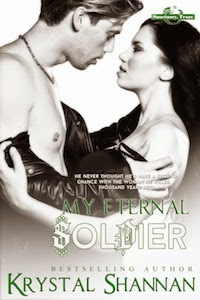 My Eternal Soldier (Sanctuary, Texas #3)
by Krystal Shannan
June 1st, 2015
The saga continues with the vampire Eira and an immortal Elvin from the Veil. Join me in Sanctuary again for an adventure that will knock the breath from your chest, bring tears to your eyes, and keep you turning the pages all night. Its Werewolves, Djinn, Dragons, Vampires, and more!

The last time he saw her, his sword was in her chest.

Inner demons have haunted Killían North since he killed the only woman he ever loved on a battlefield a thousand years ago...at least he thought she’d died. He unexpectedly gets a second chance to win her heart again, if he can just stay alive to do it. Evil lurks around every bend in the road. Magick, romance, and heart-pounding suspense greet them at every turn. But he’s determined to find a happily-ever-after with the woman he loves no matter what.

The last time she saw him, she was dying...

When the werewolf rescue squad Eira Rennir sets off with is ambushed by SECR military forces, she barely makes it away with her life. Willing to do anything to save her friends, Eira agrees to the mysterious destiny in Sanctuary she’s been avoiding for months.

Only with help from Sanctuary, can they find a way to save her friends from the treachery of Xerxes and forge a new destiny with each other in a world that’s been torn apart by hatred and prejudice.
Exclusive Pre-Order
iBooks @ http://bit.ly/1sOlKLB

“Calliope, I’d think I died and gone to heaven if the NFL started up again,” one of the male Lycans hollered from his table.

“When you finally keel over, Liam, the NFL will probably start fresh just to spite you,” she shouted then leaned over to Diana. “Liam used to play professional football before the Riots.”

Diana shrugged. “I don’t know what football was.”

“A game that Americans loved before their country fell apart,” I answered.

“Big guys ran a pigskin ball up and down a field, tackling each other to try and keep the opposite team from scoring points.”

The two Lycans rose from their table, came over, and very unceremoniously shoved their way into our booth.

“Hey, wolf man!” Calliope growled as she and Diana scooted farther into the booth to accommodate Liam’s massive frame.

Finn slid in next to me, and I glared, but didn’t say anything. I was used to Lycans —especially the alpha males that always did whatever the hell they wanted.

“What Calliope isn’t telling you, Eira, is that she loved football, too. She could scream and curse with the best of us at the big screen,” Finn replied, his deep voice rolling from his chest like warm honey.

“What I miss most is oogling all those tight asses,” Calliope returned. She seemed perturbed, but I caught a flicker of amusement in her sparkling brown eyes. The woman was a terrible flirt. It had probably been her intention all along to seduce the two Lycans into sitting with us.

I sighed. Football hadn’t been a sport I enjoyed. I much preferred the MMA style fights and other hand-to-hand combat sports. Even the obstacle courses were more interesting than chasing a damn ball up and down a field of painted grass.

About the Author:
Krystal Shannan goes to sleep every night dreaming of mythical realms with werewolves, vampires, fae, and dragons. Occasional a fabulous, completely human story slips into the mix, but powers and abilities usually crop up without fail, twisting reality into whatever her mind can conceive.

As a child, her parents encouraged her interests in Ancient Greek and Roman mythology and all things historical and magickal. As an adult the interests only grew. She is a child of Neverland and refuses to ever stop believing in fairies.

She is guilty of indulging and being a Buffy the Vampire Slayer groupie as well as an Angel fan. For those of you unfamiliar with the world of Joss Whedon, you are missing out! She also makes sure to watch as many action and adventure movies as possible. The more exciting the better. Yippee-Ki-Yay..... If you don't know the end of that phrase, then you probably don't like the same movies.

She writes stories full of action, snark, magick, and heart-felt emotion. If you are looking for leisurely paced sweet romance, her books are probably not for you. But, for those looking for a magical ride, filled with adventure, passion, and just a hint of humor. Welcome home.

Putting Magick in Romance one Soul Mate at a Time.


Sign up for newsletter to hear about new releases and giveaways!