The Massacre of the Mermaids by Alessandro Manzetti 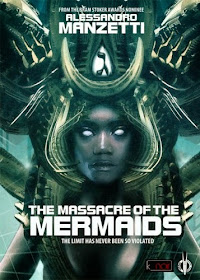 From the Bram Stoker Awards® nominee Alessandro Manzetti comes a new horror, weird, gory, and dystopian short story collection. “The Massacre of the Mermaids” includes six visionary and disturbing stories set in the future and the past: the apocalyptic and bloody Rome dominated by the first She-Pope who organizes shocking exhibitions in the new Coliseum; the bloody and cannibalistic Jerusalem during the First Crusade with gangs of rapists, criminals, and anthropophagy addicts; the future ultra-violent district Paris Sud 5 with a human landfill; the Nakara, a slaughterhouse-prison dug into the bowels of the moon, the first organized human breeding in history, managed by the diabolic Slicer; and the subterranean rooms of Mictlan, the Aztec hell that destroys Spanish victims, sacrificing them through unthinkable and brutal rites. “The Massacre of the Mermaids” will leave you breathless. The limit has never been so violated.

Though I write horror, I admit to not delving much into writing gore in my stories as others do. But digging past the gore, Alessandro Manzetti shows us the bizarre is more than horror. More than blood and guts. That Rome’s past is not any different than its apocalyptic future, in how people do what they do to others in such monstrous ways. That mankind may be always the true monster.

If you like to read the weird literary fiction, this book is for you. The author gives it to his readers in spades. Just be prepared for a gory ride of your mind that will leave you shuddering, but panting at the end.

I give Massacre of the Mermaids 4½ monstrous sheep. 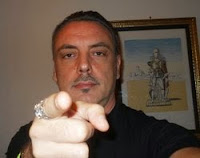 About the Author:
website-FB-twitter
Horror, science fiction, weird fiction, and dark poetry writer, Alessandro’s published work in Italian includes novels, long fiction, short story collections, and collections of dark poetry, as well as many short stories published in anthologies. English publications include The Shaman and Other Shadows, Venus Intervention with Corrine De Winter as co-author, Dark Gates with Paolo Di Orazio as coauthor, and stories and poems that appeared in both print and online USA and UK magazines and anthologies, such as Dark Moon Digest, The Horror Zine, Disturbed Digest, Bones III, Rhysling Anthology 2015, and others. His dark poetry collection Venus Intervention was nominated for the Bram Stoker Awards 2014 and the Elgin Award 2015. His poem “The Man Who Saw the World” was nominated for the Rhysling Award 2015 and his poem “Interiora” received the Sinister Poetry Award 2014. He’s a member of the Horror Writers Association, the Science Fiction Poetry Association, and the British Fantasy Society. He lives in Rome, Italy.
Sharon Stogner at 12:00 PM
Share