What I’ve been up to…Kate Douglas + giveaway

What I’ve been up to… Kate Douglas

First of all, thanks to Sharon Stogner for her invite, and those wonderful stinky little sheep who are letting me play in their pasture today. I love the name of this blog—I Smell Sheep is so perfectly graphic, especially for those of us who have ever spent nights during lambing season helping ewes deliver their new babies. (You’d think they’d have figured it out on their own by now, but Nooooooo….

They’re so cute and tiny and they fluff up really fast, though they don’t always come out all that easily. Because my hands are small, I was often the one who had to reach inside Mama Ewe and turn a baby or even pull its little legs to get it through the birth canal. My sister-in-law actually lost her wedding ring inside a ewe one time. She went back in and found it after the baby was born, but I digress… 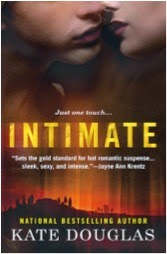 I’ve been working on copy edits for Intimate, the first novel in my new romantic suspense series, Intimate Relations, from St. Martin’s Press. I just finished those this morning in time to start gearing up for the release of the prequel to the series, Tangled. The novella releases Tuesday, May 19 in the Hot Alphas anthology.

This first story is set in the Sonoma County, California wine country town of Healdsburg where we live now, with much of it taking place in Dry Creek Valley where my husband and I lived on a 160 acre vineyard with our two kids for over sixteen years. I’ve never set a story where I’ve lived before, and it’s been fun to have a reason to be back out in the beautiful vineyards and tasting premium wines—all in the name of research, of course! 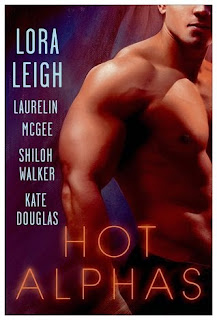 Tangled’s winemaker, Cassie Phillips, has always known the family vineyards and winery would be hers—until her father’s poor business decisions due to his advancing dementia result in Cassie working as the winemaker for a new, absentee owner. Vineyard manager Nate Dunagan is brought in to oversee the vines, but the beautiful winemaker is keeping his mind on everything but the grapes. Chemistry notwithstanding, when Nate and Cassie disagree on one too many aspects of vineyard management, it’s obvious something or someone has to give.

But there’s another issue that has Cassie and Nate concerned, and it’s tied to a very persistent stranger intent on getting inside the wine cave where the barrels of premium wine are aging. By the time Cassie realizes her father is somehow involved, the situation has turned from irritating to deadly, and it’s all more than a little bit tangled. I’ve got a first chapter up at http://www.katedouglas.com/hot-alphas.html

The first novel, Intimate, comes out December 1, followed by Redemption, on December 29. I’m just getting ready to start writing Awakened, the third and final story, which is tentatively scheduled for June 2016. 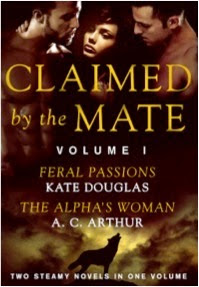 These are not the angsty, sometimes violent tales like my Chanku stories—Feral Passions is the name of a resort a bunch of lonely werewolves have built in order to entice women to their community in the hope of finding a mate.

It’s not like the old days when a lonely guy could just haul off a sexy wench from the closest village…modern women expect more from a man, and it’s really tough when you can’t tell them what you are until after you’ve bitten them and turned them into a werewolf.

It can get real ugly if they’re not into the furry stuff. Needless to say, I’m having way too much fun with this series—the stories are short and sexy, and the first one is done with two more to write. There’s an excerpt up at http://www.katedouglas.com/feral-passions.html

But, after I finish Awakened I fully intend to write the next Spirit Wild story I promised five months ago. Really. This is what happens when life gets in the way and contracts have to be dealt with and deadlines met. And no, I’m not complaining a bit. Who wouldn’t love this job? I go to work in my jammies, write about kick-ass women and hot guys all day, and it’s my frickin’ JOB!

Life is good. But, I was thinking of something I wanted to ask you, and it has to do with heroes in books—I’ve reached the point where I’ve written so many stories now with so many guys that I have trouble remembering their names. The one who is always in my mind, the one I can’t forget, is Anton Cheval, my uber alpha from the Wolf Tales series.

What heroes have stuck with you? And no, not from my books, from any books. Who are the guys whose names are always easy to recall, the ones you’ve thought about long after the book ended. I’m really curious, and wondering if any of them are the same ones I tend to recall. (Kate will be stopping by through out the day to comment)

Leave a comment and you will automatically be entered into a contest for a copy of any of my Wolf Tales books from Wolf Tales VI to 12. I had hoped to give away a copy of Hot Alphas, but I don’t have my author copies yet and have no idea when they’ll show up.

And thank you for stopping by! 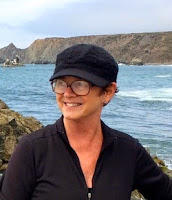 GIVEAWAY
international
Print copy of any of my Wolf Tales books from Wolf Tales VI to 12.