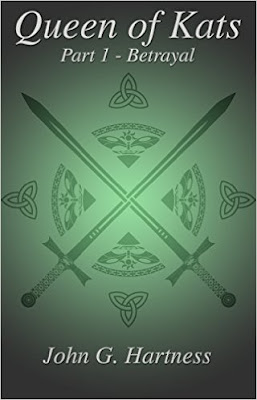 Queen of Kats Book I - Betrayal

It was supposed to be a simple job. Steal a gem, fence it to his normal guy, get paid and enjoy the company of one of Marie's lovely ladies for the night.

Instead Remarin is running across rooftops dodging armored men and crossbow bolts, the blood of his favorite fence dripping from his enchanted talking dagger, with a rescued street urchin at his side.

As simple jobs go, this one leaves something to be desired.

Best-selling author John G. Hartness presents Queen of Kats: Book I - Betrayal, the first in a three-part serialized novel featuring Remarin, a thief with poor impulse control, Trand, his partner trapped inside a dagger for a dalliance with the wrong mage's wife, and Kit, a street urchin with secrets of his own.

A light-hearted epic fantasy in the vein of David Eddings, Raymond Feist, Michael J. Sullivan and Fritz Leiber, Queen of Kats will be released as three quarterly novellas, each containing a complete portion of the novel. All three segments will be released by March 2016, when the full novel will be put on sale and the novellas will vanish into the ether, like all good thieves.

I am a big fan of Hartness' Quincy Harker series so I though I would give his newest series a go even though it was completely different. You know how authors have a style? You can tell the same author wrote two different series? Well, I would have NEVER guessed this was written by the same guy who wrote Quincy Harker. And that is kind of awesome.

At first I felt like I was reading a young adult story in a typical fantasy set in a medieval kingdom. But next thing I knew I was at the end and thinking "Wait! Where's the rest?" And this isn't a young adult novel. I loved the quirky, arrogant, and over dramatic thief, Remarin. There is more too him than we see in part one and I'm curious to find out. His best friend, Trand, is stuck in a magical dagger and Remarin has sworn to find a way to release him. But in the meantime, having a magical dagger possessed by your best friend comes in handy during fights, except Trand tends to refer to Remarin as Remoron often. Remarin picks up an unwanted side-kick and things go to hell in a hand-basket.

This was a fast paced story with delightful characters and I look forward to reading the next book.

Quotes:
"No you don't. You always say something remarkably stupid like, "What's the worst thing that could happen?" Well, you could end up dead or trapped inside a magical dagger for a thousand years, that's what could happen!"

"Dead! I'm dead, I tell you. They'll have me strung up outside the city gates with a pike up my arse and a rope around my neck. They'll kill me at both ends!"

"Because you are not a bad person, Kitty-cat. And that means that you understand that killing has a cost, and we all pay for it. They paid with their lives, and we pay with a little piece of our soul. You have to guard those little pieces of your soul because it's all too simple to cast away more of them than your can live without."

About the Author:
website-FB-twitter
Literate Liquors video blog
This is me, and this is where I write. I’m John “Falstaff” Hartness and I’ve been writing for years, for myself and for other people. Once upon a time I did a little gig for Turner Broadcasting as part of their My South ad campaign and that got me interested in writing fiction and poetry again. After writing a poker blog for several years, I’ve transitioned into writing fiction, and launched this site to be my internet home. This is where I try out new stories, new essays and poems, and post photos of some of the shows I’ve designed.

I grew up in Bullock Creek, South Carolina, the youngest of four kids. I’m a graduate of Winthrop Universty with a BA in Theatre Performance, and I live in Charlotte with my lovely wife Suzy. We’ve been active in the theatre community around Charlotte for years, and between us we’ve worked for almost every theatre group in town at some point. My work has primarily been as a lighting designer, but I've also directed quite a bit, done sound and set design, and even acted once in a while. But I’ve always wanted to write, and this site is where I do it. So welcome, thanks for stopping by.
Sharon Stogner at 12:00 PM
Share