Character Confessions...Sorrel from The Sparrow Sisters by Ellen Herrick

“Once there were four Sparrow Sisters.” Indeed, there were and in this town, Granite Point, that news would have to be reported in the ‘Scientific Journal of Duh’. I am Sorrel, the oldest of the Sisters, and by oldest I mean I’m in my late thirties (ahem) and can I just say, it’s exhausting. Everyone sees me as a sensible woman with a fragile heart and while that is true I am also thoroughly capable of both getting over a decades old crush on Simon Mayo, and being civil to his wife, Charlotte. Patience would have you believe that I have struggled all these years, in fact, that Simon has, too. We have, yes and there were plenty of times when our innocent encounters could have become something else. But, they didn’t because unbeknownst to Patience the wonder girl, Simon and I had a conversation the year before he met Charlotte. He was in law school and our Nursery had become something pretty wonderful. We had a path, Simon and me, and we needed to make sure it was the right one.

Long ago Simon and I made a date to meet each other on the Outer Beach. We agree to watch the moonrise together and we were both in a contemplative mood. Simon had a six-pack of some fruity local brew and I had Patience’s not so cleverly hidden cigarettes. Patience thinks she’s got us all hoodwinked. I’ve known about the little box under the Nursery steps since she hid it. Together Simon and I drank all the beer and smoked all the cigarettes that evening. I had to swear Pete at Pete’s Liquors to silence the very next day when I bought a replacement pack. Still, it was worth it. Simon and I talked about how we felt, we laughed a bit and I think he might have cried a little. His family isn’t easy and my family, well you’ve met them. The truth is that Simon did work up the courage to ask me if I thought we could ever make a go of it. I surprised him—and me—when I said no. I’ll never forget his face. It was as if no one had ever denied him anything, and I suppose they hadn’t. But that night I realized I was both of this little seaside town and destined to leave it. I have been biding my time ever since.

I am devoted to my sisters and to the Sparrow Sisters Nursery. I will never let Patience or Nettie down; I will always have my hands and heart in the soil. But, between you and me, I plan to use the passport I keep in my top drawer. I will be the first Sparrow Sister to leave Granite Point and I may never look back. 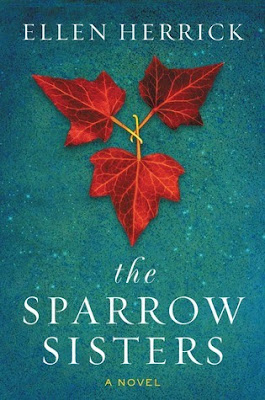 The Sparrow Sisters
by Ellen Herrick
Publisher: William Morrow
Pages: 384
Genre: Magical Realism/Fantasy
Format: Kindle/Paperback
With echoes of the alchemy of Practical Magic, the lushness of Saving CeeCee Honeycutt, and the darkly joyful wickedness of the Witches of East End, Ellen Herrick’s debut novel spins an enchanting love story about a place where magic whispers just beneath the surface and almost anything is possible, if you aren’t afraid to listen.

The Sparrow Sisters are as tightly woven into the seaside New England town of Granite Point as the wild sweet peas that climb the stone walls along the harbor. Sorrel, Nettie and Patience are as colorful as the beach plums on the dunes and as mysterious as the fog that rolls into town at dusk.

Patience is the town healer and when a new doctor settles into Granite Point he brings with him a mystery so compelling that Patience is drawn to love him, even as she struggles to mend him. But when Patience Sparrow’s herbs and tinctures are believed to be implicated in a local tragedy, Granite Point is consumed by a long-buried fear—and its three hundred year old history resurfaces as a modern day witch-hunt threatens. The plants and flowers, fruit trees and high hedges begin to wither and die, and the entire town begins to fail; fishermen return to the harbor empty-handed, and blight descends on the old elms that line the lanes.

It seems as if Patience and her town are lost until the women of Granite Point band together to save the Sparrow. As they gather, drawing strength from each other, will they be able to turn the tide and return life to Granite Point?

The Sparrow Sisters is a beautiful, haunting, and thoroughly mesmerizing novel that will capture your imagination.

website-FB-twitter
Ellen Herrick was a publishing executive in New York until she moved to London for a brief stint; she returned nearly twenty years later with three grown children (her own, it must be said). She now divides her time between Cambridge, Massachusetts and a small Cape Cod town very much like Granite Point.
Sharon Stogner at 12:30 AM
Share