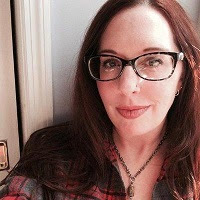 Sharon: Guess we should ask the most obvious question…How often do people mispronounce and misspell your name?
Cherie: All the time! It's spelled like the French term of endearment but pronounced like the beverage. Or, as I tell people - my father's name is Jerry, and my mother's name is Sharon. They smashed 'em together, and came up with "Sherry" but that was just silly, so they changed the spelling so no one would notice. I have no idea if this is true or not, but I have my suspicions...

Sharon: The conclusion to The Borden Dispatches duology, Chapelwood, just released. Tell our readers a bit about your heroine Lizzie and her story.
Cherie: Chapelwood happens thirty years after the events of Maplecroft, and it's set in Birmingham, Alabama - in the midst of some real-life ax murders that were so weird I simply could have never made them up. So Lizzie is older, wiser, and itching to get out of the house. Readers will see some old friends, meet some new friends, and get some answers to lingering questions. Also, I hope...they'll be scared silly.

Sharon: And how did the idea of combining the Lizzie Borden story with a Lovecraftian mythos come about? Do you have a favorite Cthulhu picture?
Cherie: The Borden murders and the Cthulhu mythos were two great tastes that taste great together. Although Lizzie herself was acquitted, I gave her a good reason to be guilty: Her parents were turning into fish-people, and they were trying to eat her. Justifiable homicide if I ever heard of it.
As for favorite Cthulhu picture, I don't know. I really enjoyed DAGON, and the video game DARK CORNERS OF THE EARTH. That's what springs to mind, anyway. 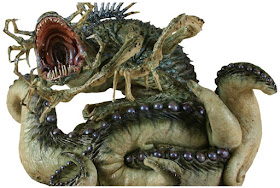 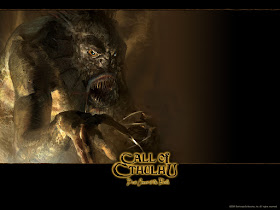 Sharon: You also wrote a steampunk series, The Clockwork Century. Do you do any Steampunk cosplay? What is your favorite prop or accessory?

Cherie: I used to, but I traveled so much that it became more trouble than it was worth. TSA frowns upon carrying rayguns in your carry on, and I was basically getting stopped and frisked every time I went through an airport. So I streamlined it down in recent years, and only break out the corsetry for local events. My favorite pieces are always the crinolines and bustles. I'm fairly petite, and I rather enjoy the opportunity to take up a lot of unnecessary space.

Sharon: You just got back from DragonCon! How was it? How did it compare to past DragonCons?
Cherie: It was a blast! A big, exhausting, crazypants blast! Every year it gets bigger and nuttier; I fear they'll need to cap attendance before long. I've been going for nearly twenty years now, and it's changed a LOT since I was barely legal to drink. So many more people - guests and attendees - so much more programming, so much more trouble to get from place to place. But the vendors hall was less aggravating than the last couple of years (they relocated it from the Marriott), so there's that. My dad's birthday falls on September 8th, so every year he gets DragonCon loot. Vendor hall accessibility and ease-of-navigation are important to me.

Katie: You're a gal who's lived in the South and the Pacific Northwest, which area do you think would be the safest during the zombie apocalypse? (There is talk zombies don't like the cold....thoughts?) And what would your weapon of choice be?
Cherie: I've lived all over, but mostly in the southeast, yes - with a 6-year stint in Seattle. I'm not sure, vis-a-vis zombie apocalypse. Walking Dead is filmed in Atlanta, so they've probably got a head start on how to handle the hordes, but I don't know. All things being equal, I think it'd be best to get out of town (I live in Chattanooga) and make for the Appalachian foothills, where there aren't too many people to zombify. Besides, you don't want to be a zombie in the Deep South, man. Everybody and his brother has a gun and knows how to use it. 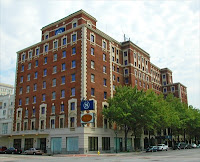 Sharon: If the flock made a road trip to your state of Tennessee, where would you suggest we stay?
Cherie: I'm only passingly familiar with Nashville and Knoxville, but Frankfurt has a long-running Rocky Horror Picture Show that comes highly recommended. Here in Chattanooga, I'd say you ought to crash at the historic Read House hotel (not the Choo-Choo, IMO). Ask for the haunted room. No, seriously.

Sharon: Your bio says you love trashy goth music. Give us some bands/songs you enjoy. Were you goth as a teen? Got a pic?
Cherie: Sisters of Mercy (natch), The Cure, Depeche Mode, Rob Zombie, you name it, really. Is it dark? Is it spooky? Is it a little funky? Hand it over. As a teen, I was kind of goth. In my defense, I mostly lived in Florida. It's hard to do goth in Florida. I blossomed a little better once I made it to Tennessee, in my late teens/early twenties. But here's my high school senior pic, class of '93 - velvet and lace, and pearls. And blonde and tan, but whatchagonnado?

Sharon: We're gonna rock out to some Rob Zombie! Turn it up...all the cool kids do.


Sharon: If you could own any piece of art in the world (painting, sculpture, or what-not) what would it be?
Cherie: Probably nothing famous. I'm happier with obscure things that no one would try to steal, so... I don't know.

Sharon: What in nature do you find awe inspiring
Cherie: Halloween. In all seriousness.

I'm showing these Cherie Priest covers because they are creepy!


Sharon: Coke or Pepsi?
Cherie: Coke. What am I, some kind of animal?
Sharon: *whispers to self* Apparently...*can of coke hits Sharon on head and Katie gives her the stink eye*
Sharon: *rubs head and mumbles* sorry Cherie...

Sharon: Godzilla or Cthulhu? (who would win in a fight)
Cherie: I'm siding with the eldergods every time.


Katie: We need a bigger boat or We came. We saw. We kicked its ass. ?
Cherie: We came, we saw. I like sharks too much, man. They get a bad rap.

Sharon: sloth under your bed or sloth in your closet?
Cherie: Nope.
Katie: *hits Sharon with Nerf ax* That was just mean.
Cherie :) 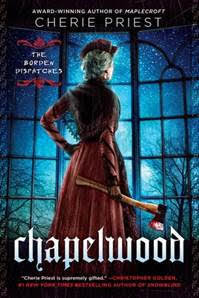 CHAPELWOOD
By Cherie Priest
Roc Trade Paperback Original
448 pages
September 1, 2015
Birmingham, Alabama is infested with malevolence. Prejudice and hatred have consumed the minds and hearts of its populace. A murderer, unimaginatively named “Harry the Hacker” by the press, has been carving up citizens with a hatchet. And from the church known as Chapelwood, an unholy gospel is being spread by a sect that worships dark gods from beyond the heavens.

This darkness calls to Lizzie Borden. It is reminiscent of an evil she had dared hoped was extinguished. The parishioners of Chapelwood plan to sacrifice a young woman to summon beings never meant to share reality with humanity. An apocalypse will follow in their wake which will scorch the earth of all life.

Unless she stops it…

About the Author:
website-FB-twitter
CHERIE PRIEST is the author of more than a dozen novels, including the Clockwork Century series (Boneshaker, Dreadnaught,Clementine), the Eden Moore series (Four and Twenty Blackbirds, Wings to the Kingdom, and Not Flesh Nor Feathers), and the Cheshire Red books (Bloodshot, Hellbent). She has received the Endeavour and Locus Awards and was a finalist for the Hugo and Nebula Awards. She lives in Chattanooga, Tennessee and can be found online at.
Sharon Stogner at 12:30 AM
Share