Book Review: Feast of Dreams (Four Feasts Till Darkness #2) by Christian A. Brown 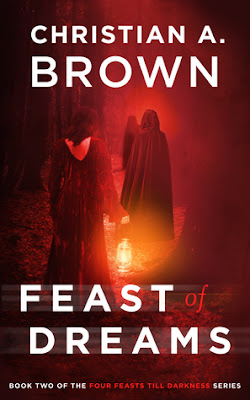 Feast of Dreams (Four Feasts Till Darkness #2)
by Christian A. Brown
Paperback, 576 pagesJune 29th 2015
by Forsythia Press
As two queens plot each other's destruction, a small band of adventurers continues its quest for the knowledge needed to defeat the mad King Brutus and his unearthly parasite, the Black Queen. Their search brings Morigan and the Wolf to the perilous forests of Alabion, where they and their companions will face the darkness of their pasts-and discover equally dark destinies.

Meanwhile, far from Alabion, the queens of the East and West continue their deadly dance. One seeks a relic of great power, while the other puts her faith in a mix of military and technomagikal force. Both are aware they have a slim window of opportunity to settle their power struggle-after all, Mad Brutus's recent defeat is at best a setback. The mad king is already amassing a new army of soulless husks in the wastelands of Mor'Khul.

Unknown to the great powers struggling for control, a father and son wander those same wastelands, scavenging what they can as they weather Brutus's gathering storm. They too have a role to play in Geadhain's fate-a role which may just provide a last remnant of hope.

The Silk Purse’s proprietor sat down at the table where the night’s entertainment fiddled with his lute’s strings. The bard glanced up and smiled at her with his eyes, although he kept on tinkering and tuning to the pitch of his voice. Maggie watched him for a spell. The man was mystifying. He was as distant as a dream one forgot and so far into himself, his music, or some secret obsession that she might as well have been elsewhere. He was certainly handsome, though, and in their short conversations today, he’d proven a capable and witty talker. She wanted a bit more of his talk.

“Will you be staying on another night?” she asked. “Before heading back to…”

She realized that in all their discussions, the man had never told her where he had come from—or where he was headed. Or much about himself at all. Even stranger, she couldn’t pin down how she’d made his acquaintance. Had he come knocking at the tavern door yesterday? Had he smiled a dashing hello with a lute over his back and a promise to play for coin? That seemed right.

“Would you like me to stay?” he asked suddenly.

He grinned from ear to ear and displayed his offer of companionship as confidently as the fox he reminded her of strutting around the henhouse and picking its prey. She could see him evaluating her body—her full breasts, strong hips, thick, wind-tossed hair, and comely face. She was as chipped and beautiful as a sculptor’s favorite piece. She wore her hardship plainly, but it had not dulled her beauty, and he seemed to appreciate her weathered self. As for the fox’s proposal, Maggie was a sensible self-made woman without need for a man. Once or maybe twice a year, she took one to her bed, but she never asked him to stay or even to break a morning fast with her. Whatever her hesitations, when the fox smiled—fiery and daring—she lit up and felt as warm as a woman sinking into a bath. A decision was made. A little outside of herself, she slid his hand over hers. She reinforced her agreement by standing up from the table and leading him past her tired staff as they cleaned up the night’s mess and rolled the drunks outside. The trip up the stairs and into her chambers was fuzzy. Suddenly, they were alone and kissing in the dark. He whispered of her beauty. “Like a cameo of Diasora,” he declared.

She wondered who Diasora was while he plucked his fingers upon and within her as though she were his lute. They tumbled into chairs, onto the carpet, and onto the bed. She wasn’t sure where they were half the time. She swallowed his hardness just as he ate and kissed the mouth between her thighs. Together they rolled and tumbled about in the dark and moaned in ecstasy. She rode him against the wall and swallowed his gasps as he spilled himself inside her. It was careless, and she should have known better. Apologetically and with a perverted grin, he cleaned out with his tongue what he had done, and passion carried her mind away again. Through the haze of their sex, she would remember his handsome smell—vanilla, subtle incense, and sweeter herbs such as marjoram. Sometimes he sang to her ears while playing the instrument of her body. She would most remember this—his passion and musicality.

When they finished, dawn had come. It cast its hard rays though the curtains and into their humid nest of sin. Maggie should have felt embarrassed or shamed even, but instead she snuggled into her lover’s taut flesh while he continued caressing her breasts. Milk drops, the bard called them, for their pendulous whiteness and succulence. She chuckled as he said it. She would have slapped any other man who made nicknames for portions of her anatomy.

“Where will you go?” she asked.

She knew this was a fleeting encounter. Men as artistic at loving as he were called to greater passions than women.

Alastair kissed her breast. “Well, I shall stay in Taroch’s Arm a while longer. I have another task to which I must attend. One more meeting after this.” He sighed and looked off with his multicolored stare to count the ceiling’s lines.

Maggie snuggled into him further until she realized what he’d admitted. “Wait! Meeting? Is that what this is? What is your aim?”

She leaped from the bed. Alastair went after her and backed her into a corner. He appeared stricken and white from regret. Rather brazenly, he kissed her so deeply she lost her breath. Although Maggie allowed it, she slapped him as soon as their lips parted. He grinned and rubbed his cheek. “What fire you have!” he said, adding sadly, “How much you remind me of a woman I once knew. Do understand. This is not how I had planned our parley. I am not ungrateful, though, for this turn of events. I would stay for a thousand kisses more if I could. However, my master is most demanding of my time.”

“You are fortunate, Maggie. Most serve masters and destinies from which we cannot break. You have made so much of yourself without the hands of others. Despairingly, I must ask this of you. It’s a task you cannot refuse.”

I can, and I shall, she thought. No man, not even a roguish wanderer, could boss her around. Then the fox whispered a secret and those familiar names to her: Thackery, Caenith, Rowena, and Galivad. By the time he was done, she had no resolve to argue. She had only an unwanted urgency to pack, make quick arrangements for the Silk Purse’s managerial duties, and leave. She had no choice—not with so many lives at stake. While she busied herself about her apartment, the bard came to kiss her a final time, and they fell onto the bed. For all their grinding, they did not make love. Soon he stopped, studied her, and soaked in her beauty. Maggie closed her eyes. She would not watch him leave. When she was certain he had gone, she pulled her sturdiest boots from under her bed and put them on.


Review
This fantasy novel that continues where Feast of Fates left off. Two queens trying to find a way to bring about each other's destruction and yet they both struggle to act quickly while the king is at a disadvantage and before his army can come into full power. Morigan and her blood-mate, the wolf, as well as the rest of the group have to travel down dangerous paths and through the darkness in the land of Alabion and they each must face very dark monsters and terrors and surviving will change them all. Love and family are the central themes of this novel.

I give Feast of Dreams 4 sheep 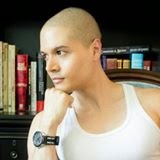 About the Author:
website-FB-twitter
Goodreads-G+
Bestselling author of the critically acclaimed Feast of Fates, Christian A. Brown received a Kirkus star in 2014 for the first novel in his genre-changing Four Feasts Till Darkness series. He has appeared on Newstalk 1010, AM640, Daytime Rogers, and Get Bold Today with LeGrande Green. He actively writes a blog about his mother’s journey with cancer and on gender issues in the media. A lover of the weird and wonderful, Brown considers himself an eccentric with a talent for cat-whispering.
Sharon Stogner at 12:30 AM
Share