Are you a vampire expert? When beginning my journey in writing You’re a Vampire: That Sucks! A Survival Guide, I thought I knew a lot. Then I started my research and discovered how wrong I was.

The belief in vampires has been around for thousands of years. The nature of these creatures varies across different cultures and time periods. While many people hold strong to the fact that vampires are killed by sunlight, most ancient beliefs do not support this. Vampires were sensitive to daylight as creatures of the night, but the sun was not thought to be deadly.

The Internet is a wonderful tool. It has allowed all of us to become experts and critics in our areas of interest. This makes us a wiser audience. Bram Stoker’s Dracula is considered the traditional and truest form of vampirism. Yet, he took many liberties with his vampire mythology. I thought it would be fun to imagine what a Twitter style interview would look like for Bram Stoker. 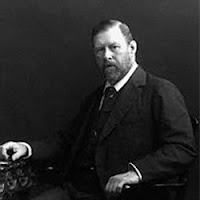 Bram: I’m excited this new technology is allowing me to discuss Dracula directly with my fans. Please, begin asking your questions.

GothGirl5: When writing your book, did you know that traditional vampires are sensitive to light and can only come out at night?
Bram: Yes.

GothGirl5: Then why did you have Dracula prancing around London like a frat boy on spring break?
Bram: I did take away his ability to transform.

GothGirl5: So you castrated him and rejected one of the core vampire beliefs!!!
Bram: What? Next question.

ChippedFang26: How does it feel knowing you committed blasphemy by writing this book?
Bram: Excuse me?

ChippedFang26: You have Dracula rest in “consecrated earth”.
Bram: Dracula is a fictional story.

ChippedFang26: But vampires can’t rest in hallowed ground. You’re writing is not only false, it’s sacrilege.
Bram: Let’s move on to the next question.

ChippedFang26: I hope you’re comfortable in hell!
Bram: Next

NightMist18: Is Dracula the original vampire?
Bram: Definitely not.

NightMist18: Then why allude that another vampire was not responsible for turning him?
Bram: Dracula has always been in control. Being turned by another vampire would have made him a victim.

NightMist18: And ignores tradition in how vampires are created. Were his brides made out of thin air too?
Bram: They were sisters, I never called them brides.

BatLife97: Why did you feel it necessary to ruin a good man’s name?
Bram: Excuse me?

BatLife97: Vlad III, Prince of Wallachia is a hero and you turned him into a monster!
Bram: He impaled his enemies on stakes.

Batlife97: He saved the Romanians and Bulgarians from the Ottomans!
Bram: And was well known for his cruelty.

Batlife97: He is a symbol of Romanian pride!
Bram: Dracula is not the historical Vlad III anyway. He is a composite of several people.

Batlife97: Then maybe you shouldn’t have used his name and physical description.
Bram: I am 64 years old and EXHAUSTED! This interview is over.
(Signed Out)

You’re a Vampire: That Sucks! A Survival Guide was a way for me to teach people about the vampire legends in a humorous way. (I was a teacher for over a decade. It’s hard to get that out of your blood.) With so many contradicting vampire stories, I also had to create my own mythology. Rather than fearing the “inaccuracies”, I look forward to hearing people’s reaction and how they feel the book holds up against their personal vampire beliefs.

You can find my book at Barnes & Noble, Amazon and your local bookstore.

(During daylight hours, I suggest sending a familiar to pick up your copy. If you don’t know what a familiar is, you better get this book quickly. Your undead future might depend on it.) 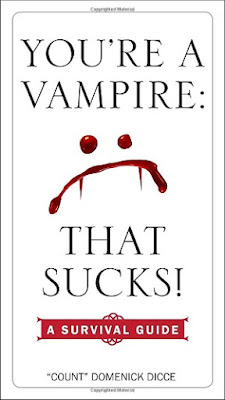 You're a Vampire - That Sucks!: A Survival Guide
by Domenick Dicce

Being bitten by and turned into a vampire isn’t the glitz and glamor that Hollywood makes it out to be. In fact, one out of five newly turned vampires will succumb to a slew of easily avoidable and common pitfalls within their first few months as a nightwalker—tempting garlic-laced Italian food, silver jewelry, and anything with an SPF below 1,000 will have to go.

As an answer to this tragic loss of undead life, “Count" Domenick Dicce has written the definitive how-to guide that just might save your pale, ice-cold skin. This helpful tome will cover everything from Vampire 101—such as hunting, feeding, and getting used to your new powers—to Vampire Graduate Studies—such as coffin selection, the ghoulish world of vampiric social hierarchy, and the universal Laws of the Vampire.

This humorous and giftable guide will be perfect for you or the vampire nut in your life, complete with illustrations throughout.

About the Author:
website-FB-twitter
When Domenick discovered you could get paid for pretending to be a Ghostbusters, a Jedi or superhero, he knew acting was the career for him. It was watching the outrageously hilarious characters on Saturday Night Live that helped him shape the type of actor he wanted to become.

Always on the lookout for ways to satisfy his intense desire to act, he began writing short YouTube sketches. These videos would unlock his love of writing. In addition to writing scripts, he began to create novels and short stories. Once again, he found himself drawn toward the more comedic characters and stories.

GIVEAWAY
a print copy of You're a Vampire - That Sucks!: A Survival Guide (US only)