On the menu today: GALEN MCALLISTER, ghostly hero of
THE HOLIDAY SPIRIT
Your chef: Dani Harper
PS - for dessert, you’ll have a chance to win a paperback copy of this yuletide paranormal! 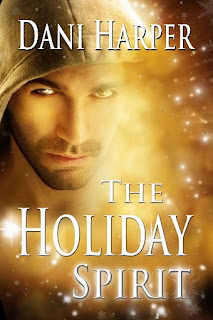 INGREDIENTS:
-Take 220 lbs. of hardworking man (you know, the kind that could portage a piano without breaking a sweat…)

-Add golden brown eyes. Must be capable of one helluva glare, knee-weakening seduction, or irreverent mischief.

-Blend in equal parts courage, humor, and PURE sex appeal (No substitutions!) Combine with a heart that’s true, and don’t forget a generous dollop of tenderness.

-Season with boldness, a tendency to run towards danger, and most of all, an overwhelming desire to protect others at all costs.

-Bind strongly with an ancient curse.

-Fold in an air of mystery due to the dark hoodie he always wears. (It’s so unfair. Ghosts—even ones that aren’t dead—don’t get to choose their outfits.)

-Marinate with determination, and the ability to innovate whenever physical actions are called for.

-Braise at high heat until steaming.


(Chef’s tip: This dish is best served in the shower!)

TASTE TEST:
“Wait, you carried me? That’s how I got to bed?” Most women would find that endearing, romantic, even exciting—and she might too if Galen was inside his big strong physical body. Given his current state, however, Kerri found herself more appalled than anything.

Galen seemed unaware of any problem. “I didn’t want to leave you sleeping at your desk. Well, technically, you were sleeping on your keyboard. What kind of man would I be if I let you wake up with square marks on your face?”

“Yeah, well, you didn’t exactly use your firefighter muscles to do it. I’d have some faith in those! For heaven’s sake, didn’t Everett say something? He must have seen you carrying me.”

“Sure he did. He warned me not to bang your head on the newel post at the top of the landing.”

“Don’t bang my head? That’s all?” She was stunned. Her friend and roommate was not just protective but often overly so. What the hell?

“You have to admit it was pretty good advice. And I did get you to your room without a hitch.”

“Why didn’t you just put me on the couch?” That much she could probably have handled.

“I thought of that. But you were so tired, I figured you’d rest better in your own bed. And it worked, right?”

She put the heel of her hand to her forehead, searching for words. “You’re so not getting this. Not a happy camper, here. I’m really uncomfortable with the idea of being levitated in my sleep!”

“I would never let you fall,” he said solemnly.

Kerri believed him, but he was missing the point. “This is about boundaries, mister.” She pointed her finger at him. “Do not take matters into your own hands. Do. Not. Levitate. Me. I know you meant well, but if I’m asleep on a bed of goddamn nails, just leave me there. Okay?”

“You’re not afraid of heights, are you?”

She stared at him for several seconds, then mentally threw up her hands and headed to the kitchen without another word. It took two cups of coffee before her brain cleared and she felt like a functional human being. She was contemplating a third when Galen appeared at last. To his credit, he looked somewhat contrite.

“I’m sorry,” he said. “I get where you’re coming from now. Honest, I didn’t think it through. Didn’t even think about boundaries and shit, but I should have. From now on, I promise not to float you anywhere without prior written permission.”

She studied his face, but there was no trace of humor in his expression. In fact he looked, well, kind of adorable really, as he tried to apologize. She’d have to be made of stone to resist those golden-brown eyes…even if her inner voice was making fun of her for being such a softy. “Well, I guess I get where you’re coming from too,” she said at last. “You were just trying to make me more comfortable.” It was easy to picture any one of her older brothers doing the same. In fact, wasn’t that a guy thing, to simply see a need and fix it without worrying about all the little social nuances involved? “I’m sorry if it seems like I’m overreacting. But how I feel is how I feel.”

“Yeah, we’re good. Especially after that incredible sandwich you left me,” she said, and grinned as his face lit up. “I admit I ate the whole darn thing before I came downstairs. You’re a pretty good cook. And there’s this too.” She raised her empty cup.

“So my clever master plan to become indispensable is working. You have to forgive me or you won’t get any more of my coffee!” he teased.

Kerri fired a potholder at his head, hitting him right between the eyes—

Except that the potholder sailed on through until it landed on the other side of the kitchen. Galen blinked in surprise, and Kerri began to laugh. After a moment, he joined her. And there it was again, that strong sweet connection that throbbed with a heartbeat all its own. The space between them evaporated and it seemed the most natural of things to find her face close to his. He smiled, and stroked a finger over her temple, drawing away a wild curl. The connection created that odd little electrical tingle she’d felt before, and suddenly she wanted to feel that on her lips. She tipped up her face just as Everett stuck his head into the doorway.

“Your aunt just drove up!” he announced, and she practically jumped away from Galen like a guilty teenager. “Oh and Waldo is scratching at the door to the office. Got himself shut in again.”

The man beside her silently smacked his forehead. “Damn, I forgot him. He was sound asleep.”

“He’s usually sound asleep. He’s a pug—it’s his natural state,” said Kerri, straightening her clothes as if she really had been wrapped in Galen’s arms. Her pulse was hammering behind her ribs and her heartbeat pulsed in her ears. Holy cow, if I can get this wound up just wanting to kiss him, what will it be like if I really do? She ignored her inner voice that insisted she had no business thinking—or doing—any such thing, but she had to work harder to ignore the hot ache inside that wanted to pick up right where they left off…

And keep on going.


STILL HUNGRY? Use the “Look Inside” feature to read a different sample of this story on Amazon, at
http://www.amazon.com/HOLIDAY-SPIRIT-wants-Christmas-ghost-ebook/dp/B013Z0F31M/ref=sr_1_1_twi_kin_2?ie=UTF8&qid=1446797260&sr=8-1&keywords=the+holiday+spirit 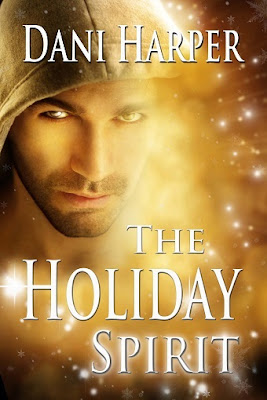 by Dani Harper
A woman who talks to ghosts.
A man mistaken for dead.
An ancient evil that stalks them both.

Writer Kerri Tollbrook spends her free time counseling the newly departed, but the tall, dark and handsome spirit she meets at the shopping mall claims he’s not dead. Is he just in denial? Or is something more sinister at work?

Firefighter Galen McAllister has felt like The Invisible Man ever since a malicious spell separated him from his still-living body. Kerri is the first person he’s met who can actually see him. Now if only he can get her to listen … because the nightmare creature that trapped him between two worlds is far from finished!

About the Author:
website-FB-Twitter

Amazon Author
newsletter (Giveaways every issue!)
Dani Harper is a former newspaper editor whose passion for all things supernatural led her to a second career writing paranormal fantasy. There isn’t anything she likes better than exploring myths and legends from many cultures, which serve to inspire her sizzling and suspenseful stories.

A longtime resident of the Canadian north and southeastern Alaska, Dani now lives in rural Washington with her retired mountain-man husband. Together they do battle with runaway gardens, rampant fruit trees, and a roving herd of chickens, with the assistance of three dogs and several grandchildren.


GIVEAWAY
Answer one (or more) of the following questions in a comment on this blog post, or make up one of your own!

Contest closes at midnight EST Sunday, November 15th, 2015. One winner will be chosen at random and announced on Monday, November 16th. Prize – A paperback copy of THE HOLIDAY SPIRIT, delivered via Amazon. Open to USA, UK, and Canada.