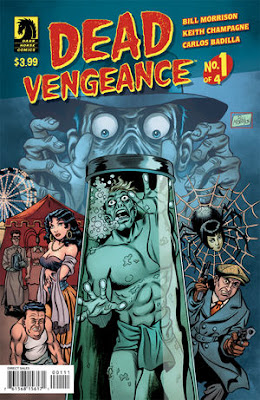 DEAD VENGEANCE #1
A DEAD P.I. SOLVES HIS OWN MURDER

Penciller: Bill Morrison
Inker: Keith Champagne
Cover Artist: Bill Morrison
Genre: Action/Adventure, Crime, Horror
Dark Horse Comics
Publication Date: October 07, 2015
Format: FC, 32 pages; Miniseries
Price: $3.99
UPC:7 61568 15617 1 00111
Preview
It’s 1940, and a phony body on exhibit in a carnival sideshow suddenly springs to life and shambles away. Not so phony after all, he is John Doe, radio commentator and archenemy of Detroit’s notorious Purple Gang! But why did he disappear in 1930, and why did the mayor, the mob, and the cops all want him dead?

Dead Vengeance is one of those titles with an immediate, eye-catching premise that thankfully mostly pays off. I love stories of sideshows, so the premise of one of the attractions coming to life had me instantly. Things quickly progress, and we find that the mysterious protagonist not only has lost about ten years but also isn’t sure who he is. There are the usual problems to deal with (getting clothes, finding answers, stumbling across someone to help him), and we slowly learn that our John Doe was once Johnny Dover, radio star who went by John Doe the Everyman. Through meeting up with his friend Joe Preston, we learn of John’s mission to clean up the corruption in 1930s Detroit through his news commentary show, and his growing clash with the mayor, who was thought to be the head of said corruption. A good portion of the issue goes back and forth between a flashback to hints of what’s happened to Johnny now: mentions of his smell, the obvious change in his appearance, and the skulking figure of a gypsy along the periphery. Things end mid-explanation as the mayor ups the stakes and decides to deal with Johnny once and for all, right as Johnny is going to provide the city with hard facts connecting the mayor to all the sundry goings on about town. 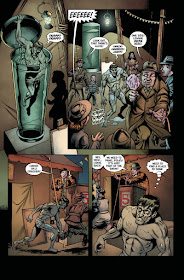 The story itself drew me in immediately. A fan of the old Creepy and Eerie comics, this issue fits into that style but gives it a crime/noir twist. There’s a lot of detail in the side-show acts, the art style, the speech mannerisms – the creators of this comic are on their game. The only thing that drew me out was the extended flashback that for me slowed the pace down a little, and the fact that instead of giving just a little bit more of an answer as to what’s going on now (you’re going to tease me with random gypsies and corpses waking up and leave me hanging!?), it ended mid-flashback by throwing a huge problem at past Johnny. I’m definitely looking forward to the next issue, though, and I give huge props for a really fabulous set up that’s well-executed in an interesting time period.