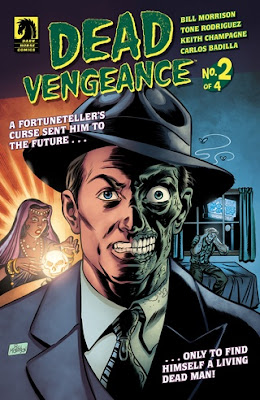 Perfect for fans of The Goon!

From Bill Morrison (The Simpsons)!

I was pleased to see that while issue 2 picks up where 1 left off, it moves past the flashback immediately and keeps things moving forward. John Dover and Joe Preston continue to work through the holes in his memory, recounting how he was falsely arrested for the murder of his wife (thanks to the corrupt mayor buying off the DA), and how they worked to break him out. By returning to the cabin where he hid out, Dover is able to remember how the hitman who did commit the crime was put away for ten years, making him inaccessible for Dover to get to. His memory takes him through going to a carnival and consulting a fortune teller out of desperation, and continuing to go to her out of attraction. Concepts of astral and time travel are kicked around as a means to go to the future to get information from the hitman, and by the end Joe is wondering if that’s what, in fact, has happened to him…but if it has, why is his body so different? The last few pages imply a love triangle as he tracks down Selina the fortune teller and also hints at a disturbing revelation about the state of John’s body and life ten years in the future.

Although there was a decent amount of flashbacking this issue, too, it was done in spurts and really served to push things ahead rather than be just exposition. John was more emotional as he struggled to put the pieces of his life together, and while you could argue that that process was a little too convenient, it works for the genre and tone of the story. It was nice to see that Selina is an actual character and not just décor, and in general it was nice to see that plot points were hinted at without overtly being hit over the head with them. All in all the characters fit the tone of the piece, the pacing was great throughout the issue, and the time travel element is definitely a new take and something I wasn’t expecting to find. I love being surprised in a good way, so the outside-the-box thinking while keeping to the style is a nice touch. I felt more empathy for John this issue now that he’s less holier-than-thou, and I’m also really intrigued by Selina’s other suitor as well. This issue gives just enough story to satisfy and just enough questions to make me curious. I also really love the color tones and the art choices – it all just fits together so well and reminds me of all the older stories in Creepy and Eerie that used similar elements that I grew up loving. This issue makes me really curious to see where this is going, and but also lets me enjoy the ride until I get there.