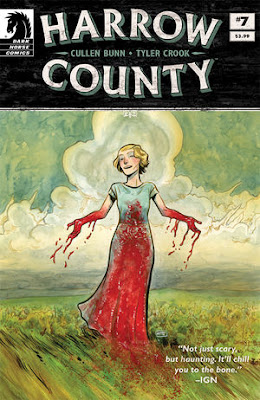 When your twin is the evil half of a dead witch that can control monsters and the undead, a joyful reunion just isn’t in the cards—which means there’s only one option for Emmy: war!

“Harrow County is a masterful creation that lingers in the small moments of terror in our daily lives.”—Bloody Disgusting

Creepy as always. We now see Emmy’s twin sister from the city, Kammi, with her servant wander through the woods and cemetery, searching for the haints and monsters hidden there. Seducing tem to her side. Meanwhile Emmy feels something in her gut that all is wrong. She does chores as she always has done, even though no one now comes for help, hoping the chores will soothe her. But she cannot ignore something is brewing. Something wrong.

Harrow County #7 uses its artwork and colors to draw the reader into feeling the uneasiness as Kammi stalks the unnatural things. The Southern gothic charm hides the rot and fear beneath. The comic series represents the South in a way those not from the area don’t know—weird and spooky, downright creepy.