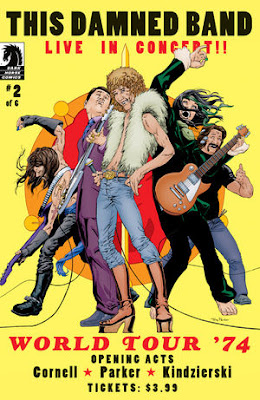 The second issue picks up a short amount of time after the mysterious visitation the band Motherfather had mid-trip at the end of the first issue. It’s interesting that most of them want to dismiss that it didn’t really happen, and that’s kind of the running question I had through this issue: Are any paranormal elements in this title completely in the band’s heads or are we going to see what’s really going on at some point? To be fair, on my second read the pacing in this issue played out better. We get each band member’s opinions of what happened the night before, as well as a look into the tensions in the band dynamic overall as they continue their tour. Summerflower and Alice, the head groupie and Kev’s wife, respectively, stand out with lead singer Justin as being the three more interesting and sympathetic characters in the cast, with Bob the drummer probably up there as one of the more reliable characters to follow. 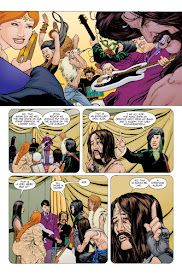 There’s division on what cover is going to be used on the next album and who has say over what, throwing Clive into a tantrum. We see more of Alex’s interaction with Gold and learn of his problems paying his dealer. The subplot about a hierarchy of drug dealers/pushers for bands who also have creative say over the music is an interesting one, though the primary concern is about people getting their money. Summerflower expresses worries on film about deviations from the band’s rider (playing off of the old Van Halen candy story), which brings things back to the maybe-paranormal-maybe-not leanings. The ending sequence is by far the most chilling, and though we don’t see who’s primarily involved, we’re led to believe it’s more real-world antagonists.

This is where I feel a little confused – I really, really wanted a rocker & demon title. There’s a huge amount of mythos and stories to be played with, and I’m assuming we’re going to go back to that, but I’m hoping the ‘is it/isn’t it’ line isn’t going to be walked for too much longer. I’m also finding that although there are obvious horror-comedy leanings, the comedy isn’t overly amusing once you get past the Spinal Tap homage. It’s hard for me to get into a lot of this issue’s actual story because the memories of the acid trips and all of Clive’s tantrums look so cartoony and make it hard for me to take a big part of the cast seriously. It’s interesting, because while the art choices served the first issue well, to me it got in the way of some characters here. And while I love the rock themes and I love the era it’s set in, I really want to see the story and characters take precedence instead of more clichés. There’s a band timeline in the back that’s nice, but a little more story development would’ve made me happier.

Three and a half sheep