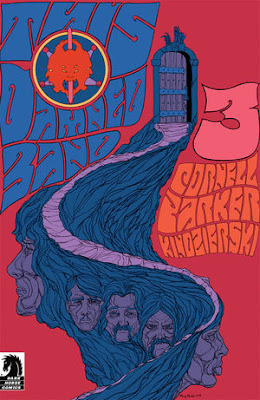 “A writer with a wicked sense of humor, a razor sharp ear for dialogue, and plenty of crazy ideas.”—IGN

Set three weeks after the events in issue two, we find Motherfather in the Chateau Recording Studio, in France. This is a great location choice, for me, because not only is the looming house reminiscent of haunted houses, but artists from Led Zeppelin to Bowie were recording in similar places throughout the seventies. Not only does it work from both those angles, but it forces the cast to ground themselves, unlike the back and forth of touring and location changes that took place in the last issue. There are once again tensions that come with recording a new album between legs of their tour, more posturing for the camera, though this issue is more reminiscent of the first where there’s a definite change in vibe when the characters are “on” vs. when they’re themselves, which is nice.

Beyond recording session tensions, Alice and Summerflower are dealing with the loss of Gold, a loss that Alex noticeably blows off (though he’s still dealing with those who want money from him). Alice and Kev are also suffering from distance in their relationship, and those scenes gave a nice human insight to the characters and a nice counterpoint to the rock shenanigans. There’s a creepy scene with one of Alice’s kids, and I was happy to see more hints at the paranormal angle in the middle of the issue instead of waiting for the end for another tease or cliffhanger. The on-camera posturing of the rockers and the cleaning staff’s reactions are pretty hilarious, and provide levity to all of the developing issues and resentments, plus a possible explanation for other mysterious happenings. There’s a great sequence of Bob in the wine cellar, which leads to he and Justin reminding each other that they just pretended to see things the night of their memorable mushroom trip, which provides some needed contrast as to who they are vs. who they are for the cameras and fans. 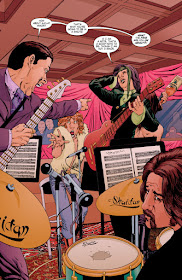 Alex and Clive remain characters I’m the least drawn to because of their single-mindedness (and they’ve yet to step out of their rocker clichés for me), but they serve their roles well in the context of the story.

Once again there are moments that happen that could be due to something unnatural…or maybe not. The line is played a little better this issue now that everyone’s in one main location and there are more physical happenings that keep the reader guessing. The overall environment of a big house helps with this, too, and gives some weight. Overall, things seem less cartoony to me this issue, and the rocker clichés are less over the top and provide plot momentum. The ending is a double-whammy of tense events, but it’s a much more satisfying ending that comes off of things building instead of waiting for something to happen. Overall, I found myself really liking this title again, and the is it/isn’t it line wasn’t annoying me this time, but has drawn me back into the story.