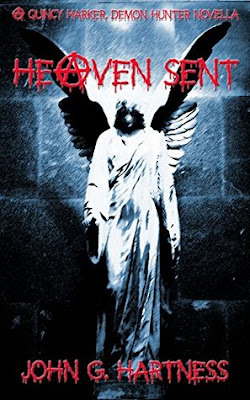 July 29th 2016 by Falstaff Books
Kindle Edition, 111 pages
BOOK 5 in the Award-Winning Dark Fantasy Series takes us back to where it all began.

He's the immortal magic-wielding child of Jonathan Harker and Mina Murray from the classic novel Dracula. But to him it's not a story, it's family history. Quincy Harker is what you'd get if Constantine were renewed by HBO and taken to the darkest of dark sides. When things go bump in the night, he bumps right back.

It's the summer of 2009, and Harker has a brand-new guardian angel. Her name is Glory, and she's here to try to keep Harker from getting himself killed. Try is the operative word. Because not even a divine guardian with a Joss Whedon fetish can get Harker through this mystery unscathed.

Someone is murdering Nephilim, the rare offspring of human and angel, and using their blood for a terrible ritual. Harker, with some help from his Uncle Luke (you probably just call him Count Dracula), has to find out who the next victim is, who the murderer is, and what the plan is. All in three days. Because no matter what kind of help Heaven Sent, it might not be enough to prevent someone from raising a lot of Hell. Heaven Sent is a prequel novella, with far-reaching effects that will change Harker forever.

This is such a fun series. If you love action-packed dark edged urban fantasy with mystery, humor and a lot of foul language then check this one out. Don't worry too much about what order you read them in. Each novella is a full start to finish mystery. There are a few series arc threads, but Hartness does a good job of cluing you in so you don't feel lost. And the stories can be read in one sitting. He is a regular wham-bam-thank-you-ma'ma writer that will leave you satisfied. Lots of bang for your buck...and that's probably enough cliches from me. And there is an unexpected twist at the end. If that doesn't sell you: he uses a Firefly and a Buffy reference.

I also look forward scenes with Quincy and his Uncle Luke (psst...he's actually Dracula) I love Quincy's personality...if you dealt with monsters on the daily you might be a bit of an a**hole too <G>.

Quotes: had to censor a bit
"It was a dick move, and I knew it, but I didn't respond well to fright, especially when I wasn't allowed to kill the thing that frightened me. I didn't particularly want to kill my guardian angel because that seemed like a bad idea on so many levels." -Quincy

Exchange between Mort (demon) and Quincy-
Mort turned back to me. "Are all humans this f***ing stupid, or are you just a shining example? Look, f***wit, you're missing the point. The point is not that something killed Baxter; the point is that something killed Baxter. Killed. Made dead. Took the part-angel son of a bitch and made him not here anymore. That takes a lot of juice. And this ain't the first time it's happened, either."

"Goddammit, I can't tell which part of you is the bigger douche, the demon or the cat!" I exploded. "More dead Nephilim, you fuzzy pr***!"

"There's no need for name-calling," Mort said, suddenly all prim and proper licking one paw and washing behind his ears.

About the Author:
website-FB-twitter
Literate Liquors video blog
This is me, and this is where I write. I’m John “Falstaff” Hartness and I’ve been writing for years, for myself and for other people. Once upon a time I did a little gig for Turner Broadcasting as part of their My South ad campaign and that got me interested in writing fiction and poetry again. After writing a poker blog for several years, I’ve transitioned into writing fiction, and launched this site to be my internet home. This is where I try out new stories, new essays and poems, and post photos of some of the shows I’ve designed.

I grew up in Bullock Creek, South Carolina, the youngest of four kids. I’m a graduate of Winthrop Universty with a BA in Theatre Performance, and I live in Charlotte with my lovely wife Suzy. We’ve been active in the theatre community around Charlotte for years, and between us we’ve worked for almost every theatre group in town at some point. My work has primarily been as a lighting designer, but I've also directed quite a bit, done sound and set design, and even acted once in a while. But I’ve always wanted to write, and this site is where I do it. So welcome, thanks for stopping by.
Sharon Stogner at 12:00 PM
Share