To Series or Not

I made the mistake one day of mentioning to an author friend the premise of a story I’d started writing. She loved the idea, but when I told her it would be a stand alone, well she didn’t like the sound of that. Lol She said, "Friends don't let friends write stand alones."

Thus, Lost God became Lost Gods, a series based on my twist of Greek Mythology and it takes place over the course of 3 stories that cover some of the same time frames. The first book is Ze's story and his story is threaded through out all 3 books even though they each feature a different couple. Ze is the reincarnation of the Greek god Zeus, his name is also Zeus but he prefers Ze. He has no memories of his past life and the powers he can wield. He has to regain what he’s lost in order to stand against his father Cronus, the god of chaos and destruction for the last time. Cronus is trying to escape his prison, Tartarus and Ze and his friends have to stop him. Along the way they all find love.

The second story in the series is Ledo’s story. He’s a demi-god, the last son of Ares and a human woman. He’s been reborn every time Ze is but unlike Ze his memories are intact. He’s there to help Ze and to be ready when Ze does regain his memories and powers to defeat his father.

The final story in Lost Gods is Linc’s story. Linc was born an orphan like Ze but he grew up as Ze’s best friend and business partner. The two are as close as brothers. So when Ze is threatened Linc will stand as he always has by his side. While he is human the touch of a goddess’ blood does run in his veins. He just needs to find the right woman to empower it.

Thus my version of 3 lost gods was born instead of just one. 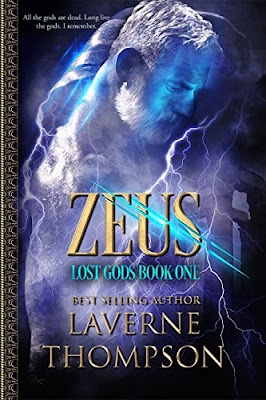 Zeus: Lost Gods Book 1
by LaVerne Thompson
Genre: Fantasy romance
Publisher: Isisindc Publishing, LLC
pre-order 8/2 release 8/16
ASIN: B01JK41N2A
Number of pages: 156
Word Count: 49,948
Cover Artist: Fiona Jayde
What if you woke up one day and found out you used to be a god? But you don’t care when you can’t save the one you love. Unless you claim your legacy and your powers, even if you have to kill your father to do it.

Ze found he would do whatever he must to make sure Kassia lived. She was an innocent.

Kassia lived her life for the last year under a death sentence. She had an end date of three months. This was her last chance to save herself against the thing killing her from the inside. Even accepting the will of a god. He could save her life but at what cost to her soul?

When survival is everything, would you do anything to ensure that you do?

EXCERPT CHAPTER 1
Five figures stood like statues partially around a pool of water.

“He can never remember.” The collective entity making up the Fates warned Kratos.

Kratos never raised his head to look at the four identical beautiful beings. Shrouded in shimmering white cloth from head to toe, with the planes of their faces barely visible, even the little of their features he glimpsed were ever changing. Seemingly to represent all the peoples of the world. At times, all four appeared feminine, but he was not so sure all were female. It mattered not. “Tell me nothing of what can or cannot come to pass. Would that I could have that gift, or curse to forget. Forget we no longer have the powers we once did. Have been all but forgotten. Lost in the grains of time.”

“It is as the world should be Kratos. You know this. Humans must make their own decisions, be the makers of their own will. Not that of the gods. No matter how powerful.”

He couldn’t tell which of them spoke, the voice came into his mind. Not even a voice exactly, more a thought that they wanted him to know. He scoffed. “Yes. The gods.” He placed his hand in the water swirling it, it was cool to the touch, and dispersed the image they’d been looking upon. At someone who in another age, other times had been the most powerful amongst them. Reason enough for the Fates to fear and condemn Zeus. The Father of them all, and a god he himself had killed, dispersing his body down to dust, carried off unto the four winds and mixed amongst all matter. Yet, never completely destroyed, pieces of him being reborn over the ages. God no more, each time just a man.

A fate worse than death for one once a god. Unfortunately, for them all, Zeus’ destruction created a chain of events opening the world to chaos, the fall of Olympus and everything they had once known. The Fates had no choice but to take control and punish them all. Perhaps their plan all along, and the excuse they needed to destroy all the gods. There could be none more powerful than the Fates. Still, Zeus must be called forth once more. Rather, what was left of him, hopefully it would be enough.

Kratos, pulled the black hood over his even darker locks, walked out of the obsidian hall into the crumbled ruins of what had once been Olympus, home of the gods. Even with his eyes open, he could still see the opulence of the buildings as they once stood. The gleaming golden doors twelve feet tall, the marbled hall, where one could hear music that lulled and pleased ones senses filling the halls. Now gone. All of it. The place reeked of age. And he no longer had the power to change any of it.

He would wish the Fates to a mortal hell, but they’d already placed him there and there was no release for his soul. His body melded into the dark matter making up the night, and he returned to the nothingness he was.

The four who remained behind continued to watch the water in the pond as it settled. Returning to its calm state and the vision came once more.

“He cannot remember…everything.” The husky whisper came from the center form.

“No. That would not bode well for what he must yet do,” the tallest of the four stated.

“As the son destroyed the father, so too must the father destroy the son,” one whispered.

“For all the powers the All Father had, he too came to his inevitable end. Death comes for all, even a god,” the final sister pronounced shaking her head.

“All the gods are dead. Long live the gods,” the cry came in unison vibrating with the power of the Fates.

Eyes the color of a summer storm zeroed in on the tall man standing at the office door. “Sorry, Linc.” Ze shut his laptop, pushing his chair away from his desk, as he stood. All six foot five of him, situated on a solidly built frame.

“Is that the Chinese?” Linc asked

Linc, his president of operations and right arm, referred to the latest deal his company, Lightning Enterprises was working on. He stepped into the room and glanced at the laptop. He stood a just a couple of inches shorter than Ze, wasn’t as broad in the shoulders, more like lean muscle. Under the veneer of the tailored trappings of his civilized suit was a body covered in a roadmap of tattoos. He also carried a knife sheathed at his ankle. You can take the boy out of the Greek slums, but some habits you never get rid of. But this boy now had an MBA from one of the best universities in the world.

Ze trusted him to run his company when he wasn’t around.

Linc would be shocked if he knew not only had Ze not been working on any last minute tweaking of their deal, but he hadn’t been working on anything related to business, legit, or otherwise. Since at times, they straddled the gray—another reason for the metal strapped to Linc’s calf. Instead, Ze had been dreaming. With his eyes wide open.

About the Author:
website-FB-twitter
newsletter
http://facebook.com/ursulasinclairauthor
LaVerne Thompson is an award winning, best-selling, multi-published author, an avid reader and a writer of contemporary, fantasy, and sci/fi sensual romances. She also writes romantic suspense and new adult romance under the pen name Ursula Sinclair.

She is a certified chocoholic and is currently working on several projects. Some might even involve chocolate. But writing helps maintain her sanity.

Sign up for her newsletter for sneak peeks and advance info on new releases as well as a few freebies exclusive to subscribers. http://bit.ly/1hA7C9W