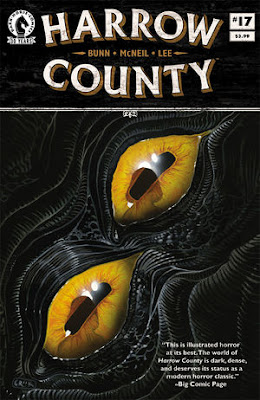 The haint, Old Buck, tells Emmy a story about Malachi who made the laws for beings such as the others, and Old Buck, to protect them. But Buck has run away to the Outer Banks, living off the wild horses. Malachi appears with Amaryllis, to try and convince Buck to come back with them, where he can keep him safe. But Buck does not. Not long after the others led by Levi kill a human fisherman. Then they head off to town where a festival is going on.

In the “Tales id Harrow County,” a hunter, Zeb shoots a deer dead, but finds a strange creature hovering over the carcass, claiming the woods are his hunting grounds, as well as the deer. It tells Zeb if he pays a tithe, it’ll let Zeb take the deer. Zeb just shoots at the thing and takes the deer home to his family. But in Harrow County, things have a way of getting their due, as Zeb finds out.

Harrow County might be the love child of Ray Bradbury and Edgar Allan Poe, if they had one. Unsettling, dark, and fantastical, with a down home Southern Gothic twist.