William Morrow is giving away a (5) sets of American Gods, Anansi Boys, Neverwhere and Stardust! 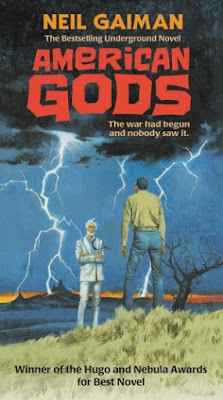 First published in 2001, American Gods became an instant classic, lauded for its brilliant synthesis of “mystery, satire, sex, horror, and poetic prose” (Washington Post) and as a modern phantasmagoria that “distills the essence of America” (Seattle Post-Intelligencer). It is the story of Shadow—released from prison just days after his wife and best friend are killed in an accident—who gets recruited to be bodyguard, driver, and errand boy for the enigmatic trickster, Mr. Wednesday. So begins Shadow’s dark and strange road trip, one that introduces him to a host of eccentric characters whose fates are mysteriously intertwined with his own. For, beneath the placid surface of everyday life, a storm is brewing—an epic war for the very soul of America—and Shadow is standing squarely in its path.

About the Author:
website-FB-Twitter
Neil Gaiman is the New York Times bestselling author of the novels Neverwhere, Stardust, American Gods, Coraline, Anansi Boys, The Graveyard Book, Good Omens (with Terry Pratchett), The Ocean at the End of the Lane, and The Truth Is a Cave in the Black Mountains; the Sandman series of graphic novels; and the story collections Smoke and Mirrors, Fragile Things, and Trigger Warning. He is the winner of numerous literary honors, including the Hugo, Bram Stoker, and World Fantasy awards, and the Newbery and Carnegie Medals. Originally from England, he now lives in the United States. He is Professor in the Arts at Bard College.

GIVEAWAY
William Morrow is giving away a (5) sets of American Gods, Anansi Boys, Neverwhere and Stardust!
Terms & Conditions:
By entering the giveaway, you are confirming you are at least 18 years old.
Five winners will be chosen via Rafflecopter to receive one set of all 4 books
This giveaway ends midnight December 2.
Winner will be contacted via email on December 3.
Winner has 48 hours to reply.
Good luck everyone!
a Rafflecopter giveaway
Sharon Stogner at 12:30 AM
Share