Until Death by Kari Anne Kilgore was recommended for a Bram Stoker nomination. 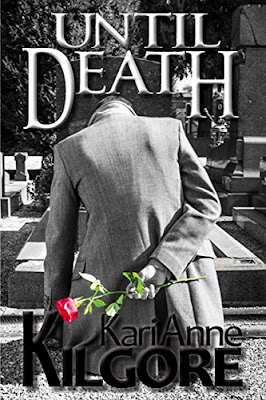 Leo Sabov never imagined a day without his beloved wife, Maria. Now he faces the rest of his life alone.

After bringing Maria to rest in her native Transylvania, Leo only wants to escape the rumors and superstitions taking over the tiny mountain village.

A former Communist Party boss, a string of unexplainable deaths, and an ancient mama dog force him into mysteries he can’t understand or explain.

Will Leo survive a test even greater than the heartbreaking death of his wife, one with life or death consequences?

Leo Sabov imagined no nightmare worse than losing his wife, Maria. Not until after her death in L.A., when he brought her body home to Transylvania to be buried. And when he finds a tradition of setting a bottle of pălincă in with her body and exchanges it for a bottle of water, does he learn the truth of why his wife could never get pregnant. For what he did has terrible consequences that the small village had worked hard to eradicate long ago when Romania was under Communism and Maria was a child. For Romania is where the legends of the vampire have been told, but it appears they are not fairytales.

A unique twist on the vampire story, with even a surprise for me at the end of the book. If you are tired of the same after same vampire books out there, this one is just what the doctor ordered.

I gave Until Death 5 vampiric sheep.


website-FB-twitter
Kari Kilgore lives and works in her native mountains of Virginia. From that solid home base, she and her husband Jason Adams find adventures all over the world to bring to life in fiction. Exploring local legends and mythologies in particular delights and inspires them. Kari writes science fiction, fantasy, and horror, and she’s happiest when she scares herself. She lives at the end of a long dirt road in the middle of the woods with Jason, two dogs, two cats, and wildlife they’re better off not knowing more about.
Sharon Stogner at 12:30 AM
Share