The Story behind the Story: Megan O'Russell's Girl of Glass + giveaway

When I started writing Girl of Glass, it was meant as a personal challenge. I love vampires, I love sci-fi, and I love dystopian. I wanted to find a way to mix the three into one story. A dystopian sci-fi with chemically induced vampires is where I ended up.

But that didn’t seem like enough. If I was going to write about the end of the world in a meaningful way, the end of the world had to have meaning. We’ve seen sun flares, nuclear war, robots taking over the world. All those scenarios are so definite. The world as we know it has ended. We can try and rebuild if we survive. So just try not to die.

But is that really how it would happen? Would the world end all at once, or would there be a slow decline? What would it be like to know the world is ending but hasn’t quite managed to fall apart yet?

So the story changed: A mid-apocalyptic sci-fi with chemically induced vampires.

When choosing what sort of person I wanted to create in this story (and inevitably torture), that person’s place in the ever-failing world was almost more important to me than anything else. Gender, race, even age weren’t as important to me as, for lack of a better word, the socio-economic class.

If you were to ask refugees living in camps or people still suffering in war zones right now in our world, their view of the state of things would be vastly different than what most people would say. But the majority—those worried about wrapping Christmas presents and what oil prices might be next week—are the readership. We as writers are targeting the majority: people with cars to drive to bookstores or a device with which to download an eBook. Even having the small amount of money it takes to buy a book is an unimaginable expense to some people, but those who do have the money are the ones Girl of Glass is going to reach. It has to be a story for those who have the means to read it.

It’s the people who have a bed to curl up in and read at night who are my audience. They’ve seen a girl from a mine country fight the Capitol. They’ve watched poor kids run through a murderous maze. What I wanted to give was a glimpse of the end of the world from the top of the crumbling ladder. What would the end of the world look like from the point of view of the privileged one percent? What would it feel like to know that the world around you is suffering and that people are dying while you eat good food, bathe in a hot shower, and sleep in a safe home? What is your obligation to help those who are less fortunate? What are the consequences of turning your back on the suffering of the majority? Those questions created the story I wished to tell.

What started as a fun puzzle became something more. Girl of Glass is a YA novel with vampires and romance. But my hope is, in its own way, trapped in between the excitement, danger, and blood, there is a glimmer of meaning. A tiny thread of truth that will make people think. If you were the girl trapped in the glass dome at the end of the world, what would you do? 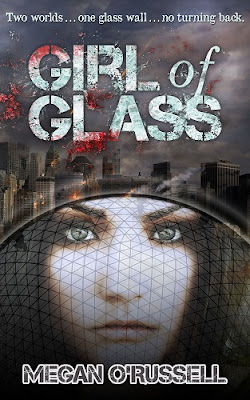 The human race has been divided. The chosen few live in the safety of the domes, watching through their glass walls as those left on the outside suffer and die. But desperation has brought invention, and new drugs have given the outsiders the strength to roam the poisoned night unafraid – but it comes at a price.

Seventeen-year-old Nola Kent has spent her life in the domes, being trained to protect her little piece of the world that has been chosen to survive. The mission of the domes is to preserve the human race, not to help the sick and starving. But when outsider Kieran Wynne begs for Nola’s help in saving an innocent life, she is drawn into a world of darkness and danger. The suffering on the other side of the glass is beyond anything Nola had imagined, and turning her back on the outside world to return to the safety of the domes may be more than she can stand. Even when her home is threatened by the very people Nola wants to help.

About the Author:
website-FB-twitter

goodreads
Megan O’Russell is the author of the young adult fantasy series The Tethering, and Nuttycracker Sweet, a Christmas novella. Megan’s short stories can also be found in several anthologies, including Athena’s Daughters 2, featuring women in speculative fiction.

Megan is a professional performer who has spent time on stages across the country and is the lyrist for Second Chances: The Thrift Shop Musical, which received it’s world premiere in 2015. When not on stage or behind a computer, Megan can usually be found playing her ukulele or climbing a mountain with her fantastic husband.