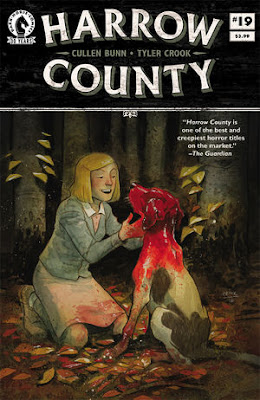 
Format: FC, 32 pages; Ongoing
When a charming young man arrives in Harrow County, Emmy is thrilled to welcome new visitors to her home. But he has come with a gang of hunters, drawn to Harrow by the lure of big game: haints. With the promise of a normal life finally within her grasp, Emmy will be forced to question her devotion to the only life she’s ever known.

Emmy finds hunters hunting in the woods and when her ‘father’ and she head to where he used to eat breakfast before going hunting himself, she learns that their prey are not deer or birds or bear, but something much, much older. Much, much darker. When she tries to warn the boy, Luke, who is with the hunters, they laugh and tell him to ignore her advice. Then they all leave on the hunt for the legendary monster.

The short story that is included with the main story, is “Priscilla.” It is about the killing of owls by goblins in the woods of Harrow County.

Harrow County #10 like the proceeding issues in the past, gives what the reader wants, chills from the creepy horror of dark legends spun not from around the campfire, but by word and art of a comic.