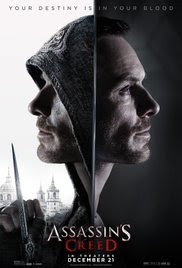 
I'm gonna let little ducky tell you if you should see Assassin's Creed...

Went to see Assassin's Creed with my husband and 15 year old daughter. We are action fans and pretty forgiving of most things, but none of us enjoyed this...well, Holly did because there was a cute assassin, but he eventually died.

First off, the music wasn't very good and too loud. The action sequences were fun, but the other 110 minutes was one dramatic pause for the camera. Even their dialogue was slow. And don't get me started on the "science" used to explain why they wanted the "Apple". Why in the world would the Templar's in the 15th century want it? They didn't have the technology to use it! And why were they guarding the descendants of the Assassin's Creed (who they gave memories of their ancestors to) with security that had no guns? Security. Had. No. Guns. They all ended up getting stabbed to death...cause they had no guns...

Disclaimer: I've never played the video game and had no knowledge of the story. Maybe that makes a difference because the whole premise kind of sucked...and they didn't do a great job of explaining what was going on.

Listen to the ducky...