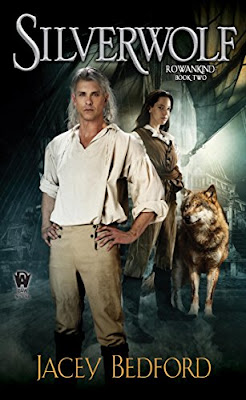 Silverwolf (Rowankind: Book Two)
by Jacey Bedford
January 3, 2016
DAW Mass Market
432 Pages
Some have returned to Iaru to find freedom with the Fae; others are trying to find a place in the world, looking for fair treatment under the law. The course of the industrial revolution may change forever.

Wild magic is on the rise. Creatures of legend are returning to the world: kelpies, pixies, trolls, hobs, and goblins. Ross and Corwen, she a summoner witch and he a wolf shapechanger, have freed the rowankind from bondage, but now they are caught in the midst of the conflict, while trying their best to avoid the attention of the Mysterium, the government organization which would see them hanged for their magic.

When an urgent letter calls Corwen back to Yorkshire, he and Ross become embroiled in dark magic, family secrets, and industrial treachery. London beckons. There they discover a missing twin, an unexpected friend, and an old enemy—called Walsingham.“Swashbuckling adventure collides with mystical mayhem on land and at sea in this rousing historical fantasy series launch set in a magic-infused England in 1800.” —Publishers Weekly 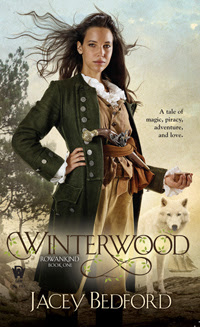 Winterwood (Rowankind)
by Jacey Bedford
February 2, 2016
432 pages
It's 1800. Mad King George is on the British throne, and Bonaparte is hammering at the door. Magic is strictly controlled by the Mysterium, but despite severe penalties, not all magic users have registered.

Ross Tremayne, widowed, cross-dressing privateer captain and unregistered witch, likes her life on the high seas, accompanied by a boatload of swashbuckling pirates and the possessive ghost of her late husband, Will. When she pays a bitter deathbed visit to her long-estranged mother she inherits a half brother she didn't know about and a task she doesn't want: open the magical winterwood box and right an ancient wrong—if she can.

Enter Corwen. He's handsome, sexy, clever, and capable, and Ross doesn't really like him; neither does Will's ghost. Can he be trusted? Whose side is he on?

Unable to chart a course to her future until she's unraveled the mysteries of the past, she has to evade a ruthless government agent who fights magic with darker magic, torture, and murder; and brave the hitherto hidden Fae. Only then can she hope to open the magical winterwood box and right her ancestor's wrongdoing. Unfortunately, success may prove fatal to both Ross and her new brother, and desastrous for the country. By righting a wrong, is Ross going to unleash a terrible evil? Is her enemy the real hero and Ross the villain? 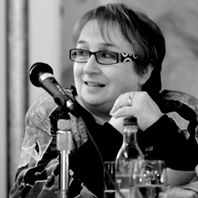 About the Author:
website-FB-twitter
Jacey Bedford has a string of short story publication credits on both sides of the Atlantic. She lives a thouand feet up on the edge of the Yorkshire Pennines in a two hundred year stone house. She has been a librarian, postmistress, rag-doll maker, and a folk singer in an acappella trio.

GIVEAWAY
One winner: print copy of Winterwood and Silverwolf
US/CAN Only