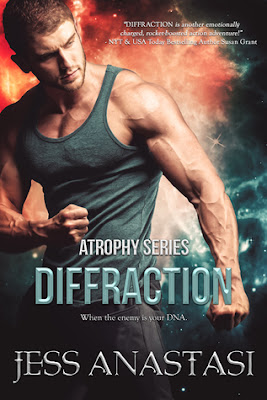 Diffraction (Atrophy #3)
by Jess Anastasi
January 2nd 2017
by Entangled: Select Otherworld
After his unusual reaction to a weapon, Commando Varean Donnelly is accused of being a shape-shifting alien and imprisoned onboard the Imojenna. Sure, he has abilities he keeps hidden from everyone--including the gorgeous doc examining him--because the government makes sure people as different as him disappear. For good.

Imojenna doctor Kira Sasaki knows there's something different about the handsome commando the captain's thrown in their brig. She doesn't think he's Reidar, although he might have been a victim of their cruel experiments. But when Kira learns the stubborn commando's racial make-up, she finds herself torn between defending him to Captain Rian Sherron and his crew or urging Varean to escape while he still can.

No one knows why Commando Varean Donnelly had such a strange reaction to a weapon meant to weed out dangerous shape shifting aliens but the captain of the Imojenna isn’t taking chances and locks Varean up until he comes clean about who and what he is. Varean isn’t talking, not even to doctor Kira Sasaki who knows he’s different but is certain he’s not a physical threat to her. When tests reveal Varean’s racial makeup, Kira is torn between defending him to the captain and helping him escape while he still can.

New to me author Jess Anastasi has a real winner with her sci-fi romance Diffraction. The set up was easy to jump right into even though I missed the first TWO books in the Atrophy series (Oh the horror because I really like this author’s style). Yeah it was clear that I missed certain things about this group of characters but the author made sure that enough facts were given so that I wasn’t completely lost.

It didn’t take long for me to fall in love with the crew of the Imojenna. Even with all their rough edges, they were a likable lot. Varean was the newbie of the crew, the reluctant prisoner with a mysterious genetic background. Anastasi did a great job of making him a likable hero but at the same time an unknown variable among an already established group of characters. I love that Varean’s secret wasn’t immediately revealed as it was a big driving point of the plot but even when it was revealed the story didn’t slow down one bit.

Kira was definitely my type of heroine too. She may not have been a get in your face kind of character *cough* Lianna *cough* but Kira had her own kind of strength and an incredible calm in dangerous situations. No hysterics from her at all, plus she stood up to anyone and everyone when she believed in something or someone. She had a quick wit and a hidden sarcastic streak that made her a match for anyone in a scene with her.

Jess Anastasi knows how to create a balance between the sci-fi and the romance elements too. I didn’t feel overwhelmed by all the space talk going on (Because I’m still new to sci-fi romance) nor did I feel like the romance was dominating the sci-fi world the characters lived in. I loved both parts of the book and the healthy amount of action scenes or the bigger plot that seems to be going on in the book. I do feel that Diffraction was an ensemble cast type book where the secondary characters aren’t really secondary and sometimes that can make for too much going on but in this case it worked. I came into this series late so I felt like I got to know these characters really well and was happy to have them around. Varean and Kira still kept the spotlight on themselves when it came to their budding (and hot) romance but they didn’t seem to mind sharing it with others.

Overall, Diffraction was one of those rare sci-fi romances that a person can read without feeling like they themselves have been abandoned in the middle of space. The action is explosive, the romance is passionate, the plot is engaging, and the characters are unforgettable. Anastasi is going on my “Watch” list for sure.

About the Author:
website-FB-twitter
Jess has been making up stories ever since she can remember. Though her messy handwriting made it hard for anyone else to read them, she wasn’t deterred and now she gets to make up stories for a living. She loves loud music, a good book on a rainy day, and probably spends too much time watching too many TV shows. Jess lives in regional Victoria, Australia, with her very supportive husband, three daughters, two hyper-active border collie dogs, and one cat who thinks he’s one of the kids.