Book Review: Wrathbone and Other Stories by Jason Parent 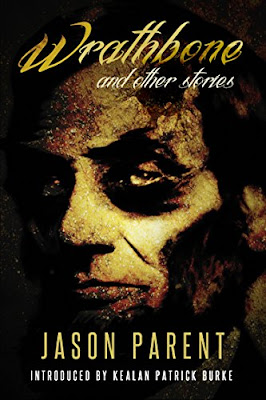 Wrathbone and Other Stories
by Jason Parent
Introduced by Kealan Patrick Burke
October 1, 2016
164 pages
Publisher: Comet Press
Terror follows those who let it into their hearts.
Wrathbone
Guests of President Abraham Lincoln and Mary Todd Lincoln, Major Henry Rathbone and Clara Harris attend a showing of Our American Cousin at Ford's Theatre on April 14, 1865. On that fateful night, a great man falls, but he is not alone. For Henry and Clara, the night is only the beginning of lives wrought with jealousy, madness, and horror.

The Only Good Lawyer
Bradley is a savvy defense attorney with no scruples. Under his representation, many a guilty man has gone free. But when a voodoo priest takes the stand, Bradley soon discovers that he, too, is on trial, and the punishment for guilt may be more than he could bear.

Dorian's Mirror
Dorian loves himself, and why wouldn't he? Every guy wants to be him, and every girl wants to be with him. He would trade all he has to make his looks last forever, but bargaining with the devil may leave him short a soul.

For the Birds
Nev's best friend is his parrot. In fact, it's his only friend… and his only ally when his home is invaded.

"From the eerie opening tale to the grisly closer, and all of the wonderfully mean-spirited tales in-between, Wrathbone is a winner!" --Jeff Strand, author of Dead Clown Barbeque

"This is horror of the mind at it's very best . . . Very dark, very atmospheric, very powerful writing. Excellent stuff . . . Only the second time ever that I have given every story in a collection five stars. This one is going to be hard to beat." --Nev Murray at Confessions of a Reviewer and Scream Magazine

"Wrathbone and Other Stories is a hard-hitting collection that you can completely immerse yourself in. The title story is a beautifully written period tale of love and tragedy." --Mercedes M. Yardley, author of the Bram Stoker Award winner Little Dead Red.

"Jason Parent channels the darkness. Wrathbone and Other Stories offers a glimpse into the twisted mind of a gifted storyteller, whose characters are every bit as vivid as the demons that haunt them. Parent's definitely an author to watch!" --Michael McBride, author of Subterrestrial and Burial Ground

Wrathbone and Other Stories is exactly that. A collection of horror stories by Jason Parent. The longest story, "Wrathbone," is about Henry Wrathbone's spiral into madness after witnessing the death of Lincoln. The story has been compared to the writing style of Poe and I agree. While I'm not a fan of this particular style, I can appreciate how beautifully written it is.
The other four short stories are more my style, horror along the lines of Tales of the Crypt. In "The Only Good Lawyer" the main character gets what he deserves...a little karma. In the case of "For the Birds", the poor guy is a victim of circumstance. You see what is coming, but know that the guy is powerless to stop it. "Dorian's Mirror" is exactly what you think it would be about...vanity, and "Revenge is a Dish" is probably the most disturbing (this is a good thing when talking about horror, by the way <G>). The main character, Maurice, isn't the nicest person, but he doesn't deserve what happens to him. But there is an opportunity to get back at those who left him for dead...unfortunately for them, survival has changed Maurice.

Jason Parent is an excellent writer and story-teller. Even though you know what is going to happen to the characters (there are no crazy twists) you can't help but keep reading the train wreck coming.

Sheep Review: What Hides Within by Jason Parent 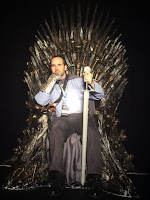 About the Author:
website-FB-twitter
In his head, Jason Parent lives in many places, but in the real world, he calls New England his home. The region offers an abundance of settings for his writing and many wonderful places in which to write them. He currently resides in Southeastern Massachusetts with his cuddly corgi named Calypso.

In a prior life, Jason spent most of his time in front of a judge . . . as a civil litigator. When he finally tired of Latin phrases no one knew how to pronounce and explaining to people that real lawsuits are not started, tried and finalized within the 60-minute timeframe they see on TV (it's harassing the witness; no one throws vicious woodland creatures at them), he traded in his cheap suits for flip flops and designer stubble. The flops got repossessed the next day, and he's back in the legal field . . . sorta. But that's another story.

When he's not working, Jason likes to kayak, catch a movie, travel any place that will let him enter, and play just about any sport (except that ball tied to the pole thing where you basically just whack the ball until it twists in a knot or takes somebody's head off - he misses the appeal). And read and write, of course. He does that too sometimes.