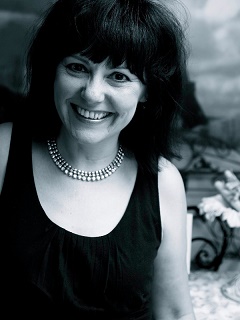 Sharon: Hello Merrie! Our last interview with you was back in 2012 with the release of your YA Selkie fantasy, Fathom. Is this your first release since Fathom? What has been keeping you busy for the last four years?
Merrie: Hi, Sharon! Whoa, has it been four years? Yikes! What HAVE I been doing? Well, I've definitely been writing. But Lost Girls is the first book that's sold to a traditional publisher since Feast. I have two other YA projects that haven't found a home yet, and another book that is either an adult or a new adult book which is looking for a home too. It's like trying to find homes for puppies. They're great puppies! Unfortunately, lots of people already have a puppy or two.

Sharon: Tell us a little about how Lost Girls came to be and what it was like having your protagonist, Rachel, living in your head?
Merrie: Lost Girls started with a shred of an idea, just a few sentences I'd written where I put a girl in peril. It was basically about a bunch girls who had been kidnapped (separately) and when they came home, they had both amnesia and strange new abilities. So, in its first generation, this book was very much like X-Men. But that changed before I got 100 pages into the book. I took away all of the science fiction elements and made it into a contemporary, which surprisingly made it a much stronger story. As far as having Rachel Evans in my head, she was a fun character to live with. The character that was the hardest to get out of my head after the book was over was Chaz from Afterlife! He was such a cynic and he had strong opinions. I loved him, but I was glad to finally get my own brain and personality back! LOL.
Sharon: It’s interesting the book started out as a fantasy and then became contemporary. Do you think writing contemporary is harder/easier than fantasy?
Merrie: Well, every book has it's problems, so from my perspective every book is hard to write. But I read more fantasy and science fiction, so it's a bit harder for me to come up with story ideas for a contemporary book.

Sharon: This is a stand-alone novel, just like all the other books you’ve written. Is there a reason you haven’t written a series? I would love to experience more of the fairy-tale like story of the Darklings from Feast.


I Smell Sheep review of Feast
Merrie: I'm so glad you liked Feast and the Darklings! I liked the Darklings too. The really crazy thing is, not every book I've written was supposed to be a stand-alone. I had hoped and planned for Feast to have at least one sequel, but it didn't get picked up. I wrote a YA science fiction novel that was supposed to have at least one sequel, but it never got picked up. My latest gothic horror adult/new adult novel has two sequels planned. Also, the other YA science fiction novel that I recently finished writing is supposed to have a sequel.
And Fathom was going to have a sequel or two, but I didn't want to self-publish another novel. It wasn't really helping my career. So, I guess it just wasn't in the cards. Or at least, not yet.
Sharon: Do you think self-publishing a sequel (like Feast), with a fan base already, would have done better than a debut book?
Merrie: It's hard to say. I think when I wrote Feast, the market for paranormal romance was beginning to wane. Personally, I'm not a fan of self-publishing. That's not to say I'll never self-publish another book. But it's just really hard to build an audience and make any money that way. Also, I wrote Afterlife and Feast, then I started writing YA, so it was a bit like starting over anyway.

Sharon: Did you include animals in Lost Girls? I know in the past your pets have demanded representation in your stories.
Merrie: There is an animal in Lost Girls, a Labrador named Buster. Unfortunately, he passed away during the year that the main character, Rachel, forgot. So to her, it was like losing her dog all over again. (I'm so mean to my characters!)


Sharon: Do you collect anything?
Merrie: I collect too many things! LOL. I finally had to narrow it down, or our condo would be overflowing. So now, what I love to collect is vintage Mexican folk art. It can be pottery, paintings, wooden carvings, colorful woven blankets, dishes, etc. My favorite period is somewhere between the 40s and the 50s, but I actually have a few pieces from the 19th century. I realized this when I saw a piece similar to one of mine in the historic Mission San Juan Capistrano.
Sharon: Sounds beautiful! Share a pic or two of your favorite pieces?
Merrie: Sure! Here's a photo of a vintage folk angel. It's about two feet tall and made of carved wood. Also, here's a shot of the type of Mexican pottery that I love, as well as a handmade wooden cross, covered with Milagros. 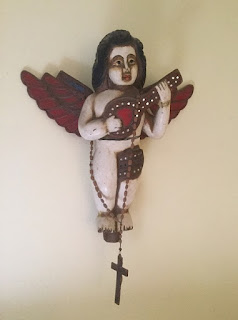 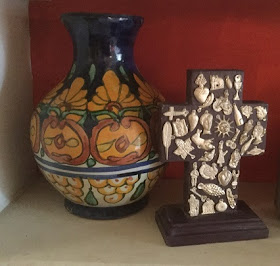 Sharon: If you could own any piece of art in the world, what would it be?
Merrie: I studied fine art in college and I adore oil paintings. I'd love to own a large original oil painting done by a local artist. I'm open to the subject matter, as long as it's the right color palette and intriguing. I've wanted to make a purchase like this for about twenty years.


Sharon: What is the superior breakfast food of choice and why?
Merrie: This will sound so lame, but I adore peanut butter on whole grain toast, with an additional tablespoon of coconut oil. Pure yum. Plus it's one of those long-term healthy things I do for myself.
Sharon: Not lame. I love peanut butter! Never thought about putting coconut oil on it…where did you learn that one? I’m a pancake girl by the way <G>.
Merrie: Pancakes are yummy! I wish I could live on pancakes! I have to be careful about sugar, though. Coconut oil is good for your brain (among other things) and I notice that I think clearer when I include it in my daily diet.


Sharon: If you were a flower arrangement what flowers would you be made of?
Merrie: Easy answer. Peonies! They're my favorite flowers, but their season is so short that I almost always miss them. *weeping softly* They were everywhere when I lived in the Midwest, beautiful drooping hedges that lined driveways. Sigh. Here in California I only see them for sale as cut flowers.


Sharon: My daughter’s name is Holly and if one more person calls her Holly Jolly I think she might explode <G>. Did you get a lot of teasing around Christmas time because of your name?
Merrie: Aww, I love the name Holly! I guess people just say the first thing that comes into their head. I don't get teased at Christmas, but people always think I should write "Merrie Christmas" on cards or something. Personally that sounds a bit lame to me. Like it suddenly became my holiday or something. I always thought Halloween belonged to me, since it comes about a week after my birthday. The funny thing that people do to with my name is they try to convince me that it sounds different from Mary. (It doesn't.) And of course, like everyone else, my name was always pronounced incorrectly by teachers at school. So I've kind of grown to hate the name Marie, since that's the mispronunciation I hear most often. (Sorry, everyone named Marie! It's a great name! Really!)
Sharon: Lol! The crazy way people spell names nowadays makes it hard to guess pronunciation and spelling…even with the simplest names. No one pronounces my last name correct. It is Stogner…everyone wants to make the O long, and it is a short O sound.
Merrie: I think I've been pronouncing your last name wrong too. Oops! Sorry!
Sharon: LOL! That's all right...here is a basket of puppies anyway...

Sharon: gift bag or wrapping paper?
Merrie: Hmm. Gift card? LOL. I do happen to like the simplicity of a gift bag.

Sharon: fresh water or salt water?
Merrie: Fresh! I live by the ocean but no way am I swimming in it. The ocean tries to eat you.
Sharon: Yes! It does. I grew up near the beach and you can’t get me in it anymore.

Sharon: travel into the future or into the past?
Merrie: The future! I already know what happened in the past and that makes it kind of boring. I'd like to discover what's going to happen in the future. I don't care if it's twenty years or fifty years or three hundred years, I want to go! Plus, just imagine all the (true) science fiction stories I could write when I came back!
Sharon: Would you use your knowledge of the future for monetary gain? Become an oracle?
Merrie: See, this is what I love about science fiction. That's a great what if! I'd probably be one of those weird people walking around with a sign warning of the end of the world. Or the end of socks. Or the end of cake.
Sharon: *GASP* The end of cake?! That is more like a horror story!

Sharon: Chinese take-out or pizza?
Merrie: Wow. I love both SO much, but there are more pizza restaurants nearby so that means more pizza. If I opted for yummy Chinese take-out, I'd only get it about once a month. Sad me. Now I want Chinese food. Like, right now.
Sharon: Got a favorite dish?
Merrie: I love orange chicken, fried rice, moo goo gai pan, and sweet-and-sour pork. But I also love Japanese, Thai and Vietnamese food. I'm blessed to lived in an area where there's a wide diversity of cultures and foods. (It's just none of them are as close as the pizza place next door. LOL.)


Sharon: Swans or peacocks?
Merrie: Both? They're both so incredibly beautiful. Now if you'd made the choice between blue herons and any other bird, I'd have easily opted for the other bird. Herons scare the crap out of me! (They live around me and I know they're always listening and watching. Even now. *shivers*)
Sharon: Lol! We have a gang of turkey buzzards around here. Their heads all swivel when you pass by…I know they’re thinking “You’re next…” 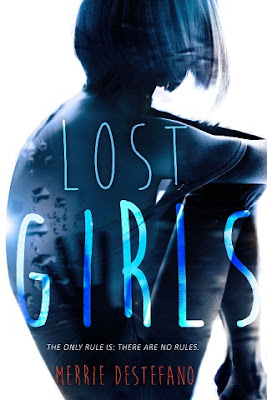 Yesterday, Rachel went to sleep listening to Taylor Swift, curled up in her grammy’s quilt, worrying about geometry. Today, she woke up in a ditch, bloodied, bruised, and missing a year of her life.


She doesn’t recognize the person she’s become: she’s popular. She wears nothing but black.


Black to cover the blood.


And she can fight.
Tell no one.
She’s not the only girl to go missing within the last year…but she’s the only girl to come back. She
desperately wants to unravel what happened to her, to try and recover the rest of the Lost Girls.
But the more she discovers, the more her memories return. And as much as her new life scares her, it
calls to her. Seductively. The good girlgone bad, sex, drugs, and raves, and something darker…something
she still craves—the rush of the fight, the thrill of the win—something she can’t resist, that might still
get her killed…
The only rule is: There are no rules.

About the Author:
website-FB-twitter
blog-tumblr-instagram
goodreads-newsletter
Born in the Midwest, magazine editor Merrie Destefano currently lives in Southern California with her husband, two German shepherds, a Siamese cat, and the occasional wandering possum. Her favorite hobbies are reading speculative fiction and watching old Star Trek episodes, and her incurable addiction is writing. She loves to camp in the mountains, walk on the beach, watch old movies, and listen to alternative music—although rarely all at the same time.
Sharon Stogner at 12:30 AM
Share