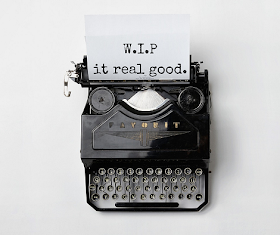 This is going to be fun!
I’ve been working on a new book in fits and starts over the past few years (not sure if it’s a series or a stand alone). It started as a YA idea, so that I my kid could read something I’ve written. But, while I was working out the teenage main characters, I found myself falling in love with the adults around them. So, I changed it, and it’s YA no more! (Sorry, Syd.)

The book is about a reluctant demon hunter who is tracking her demonic ex across the US.

Here’s a little snippet from the opening:

The porthole to hell is located in the furthest stall in the men's bathroom at the Jesus Christ is Lord truck stop on Interstate 40 in Texas. I know this because I stood in the urine-soaked industrial bathroom, baking in the arid heat of late July Amarillo. Sweat beaded down my neck and puddled in my cleavage, which I dabbed at with a scratchy piece of brown paper towel. I stared into a shit covered toilet waiting for any manner of demon to emerge from the bowels of hell.

But this was a long-ass wait.

The men’s room door smashed open, flooding the dank space with the stark desert light of high Noon. I shielded my eyes and looked at the open door. A tall man stood in shadow, his bulk blocking out the blazing sun behind him. With a grunt, he stepped over the threshold of the bathroom. The door slammed behind him and offered some relief from the heat that snaked its way in. He strode forward, beer belly heaving with the strain of exertion on this hellishly hot day. I wrinkled my nose as his acrid body oder exploded over the smell of stale beer and piss. He adjusted his trucker hat and gave me a nod. I reached behind me, fingering the cool metal of the throwing knife I had tucked in a holster fit to my lower back. 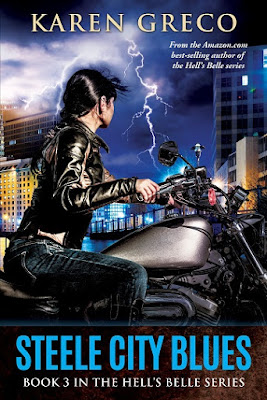 Now that supernatural creatures are out of the closet, Providence is descending into an Apocalyptic wasteland. With the abrupt shut down Blood Ops, Nina and Frankie are on their own to save Dr. O and the other supernatural prisoners from certain death. Not knowing where Demon Mayor Bertrand’s loyalties lie, they are forced to rely on some questionable allies to battle Leila, a powerful vampire/witch hybrid hell bent on creating an indestructible supernatural army. She also happens to be Nina’s mom.

Alliances are tested and relationships fractured as Nina and her band of supernatural crime fighting misfits are pushed to the breaking point. 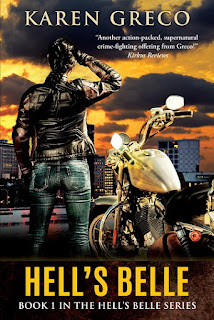 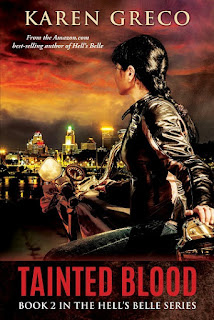 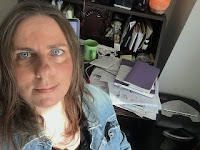 About the Author:
website-FB-twitter
goodreads-blog
Karen Greco is originally from Rhode Island and loves hot wieners from New York System, but can't stand coffee milk. She studied playwriting in college (and won an award or two). After not writing plays for a long time, a life-long obsession with exorcists and Dracula drew her to urban fantasy, where she decapitates characters with impunity. Steele City Blues is the third book in the Hell’s Belle series, after Hell’s Belle (the first) and Tainted Blood (number two). She writes contemporary romance for a small press under the pen-name Jillian Sterling, and has a day job in entertainment publicity.

Tour giveaway
10 copies of the book in Kindle or Epub format.