“I Smell Sheep” puts me in mind of a farm, and hooved animals, which, as the proud mama of a darling rescue horse named Mittens, made me think, of course, of horses. Which means that I will now share with ewe a hilariously terrible story that happened just yesterday, involving me and Mittens and a river.

Mittens, you see, loves to swim. And as it has been unbearably hot here, we thought it would be great fun to ride down to the river. Here is a picture of me and Mittens (not yesterday, but another, less eventful day) enjoying the lovely cool water. 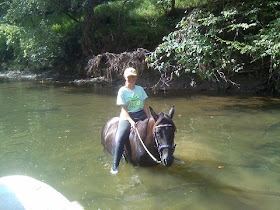 Now, Mittens has recently developed a habit of laying down in the water. With me on her. It’s hysterical. I get dunked, she gets to cool down, and it’s all great fun. Until it’s not. Here’s how it went down yesterday:

Me: “Maybe not right here, Mittens. It’s a bit rocky, and way too deep…”

Mittens (laying down anyway): “What? Did you say something? Oh boy, this water feels great!”

Me: (Splash/Splutter/Gasp). “Mittens! What did I just say!”


Me: (trying to lead Mittens across the river over to a rock that I can climb on in order to be high enough to scramble onto her back.)

Mittens: “Where are we going? Over here? No? Over here? Ack, I’m tripping all over myself!”

Me: “Can you please watch where you put your feet? You’re stepping on me.”

Mittens: “I’m incredibly excited for no reason and I can’t see my feet.”

Me: “Ok, but if you just slow down and follow me…”

Mittens: “How about if I just go faster and change direction repeatedly with no warning?”

Me: “Mittens, you are standing on my foot.”

Me: (falls over backwards, head goes under water, foot stays firmly planted under Mitten’s hoof whilst the rest of me goes in every other direction, brain yells ‘Ima die, Ima die, Ima die’.)

Mittens: “What? Something wrong? Hmmmm?”

Random kayak guy, floating by, waves happily. I wave back, standing on one foot, smiling as much as is possible when one’s foot has just been broken and one has just nearly drowned, because, you know, politeness.

Me: “Mittens, I think you broke my foot.”

Mittens: “Huh? Yeah, can you hurry up please? I want my dinner now.”

Mittens: “Oooh, are those treats in your pocket? I LOVE treats!”

So now I’m in a stupid-looking boot for several weeks, and can’t ride, or do yoga, or pretty much anything. And it’s the most absurd set of circumstances; one that made the x-ray tech burst out in a gleeful cackle of laughter. “Oh!” she says. “That is the best story! So much better than the lady yesterday who dropped a can of beans on her foot. You win for best broken foot story! You win ALL the stories!”

Which brings us right round to “Barnabas Tew and the Case of the Missing Scarab”. Barnabas (along with his assistant Wilfred) often finds himself in ridiculous situations like this, that spiral out of control with one comedic error after another. In a way, Mittens and I ARE Wilfred and Barnabas. So, if you found this story amusing, you will probably also like Barnabas’ shenanigans.

Will I take Mittens swimming again? Of course! She loves it, and she didn’t mean to smoosh my foot. Will I be more careful of where her hooves are, in relation to my own feet? I hope so!

The true moral of the story, of course, is this: if ewe are kayaking in the woods and ewe see someone getting stomped on by a 1,200 lb animal and being knocked over and generally experiencing a near-death occurrence, it’s best to just float on by, silently smiling and waving and taking pictures. 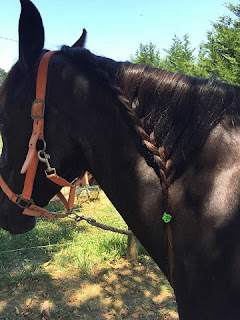 Mittens, pre-foot stomping, with her lovely new ‘do. 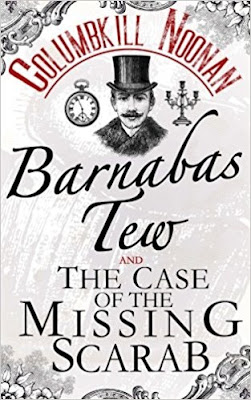 Barnabas Tew and the Case of the Missing Scarab
by Columbkill Noonan
July 26, 2017
Genre: Mystery/Mythology
Number of pages: 273
Word Count: 84,467
Cover Artist: Adobe Stock/Lynea/Soqoqo
Baker Street isn’t the only place in town
Barnabas Tew is a private detective struggling to make a go of it in Victorian London.

Fearing that he is not as clever as he had hoped to be, he is riddled with anxiety and plagued by a lack of confidence brought on in no small part by his failure to prevent the untimely deaths of several of his clients. Matters only get worse when Anubis, the Egyptian god of the dead, is referred to Barnabas by a former client (who perished in a terribly unfortunate incident which was almost certainly not Barnabas’ fault). Anubis sends for Barnabas (in a most uncivilized manner) and tells him that the scarab beetle in charge of rolling the sun across the sky every day has been kidnapped, and perhaps dismembered entirely.

The land of the dead is in chaos, which will soon spill over into the land of the living if Barnabas (together with his trusty assistant, Wilfred) cannot set matters to right.

Pulled from his safe and predictable (if unremarkable) life in Marylebone, Barnabas must match his wits against the capricious and dangerous Egyptian gods in order to unravel the mystery of the missing beetle and thereby save the world.

Excerpt:
“You see,” said Anubis, “Khepre has gone missing. Are you familiar with Khepre?”

“Khepre is our scarab beetle. He is responsible for rolling Ra across the sky every morning and then down beneath the earth every night. Without Khepre the sun cannot move. The sun will no longer rise and set as it should.”

“That is why it is so hot in here?” ventured Barnabas, proud of his deductive skills. He had noticed almost immediately how very bright the light was in this place and that the air was intolerably stuffy.

“Exactly,” said Anubis. “And if this continues for much longer, the heat and the constant daylight will spill out onto the mortal world. There will be famine and death and chaos. You can see that this must not happen.”

“Dreadful, indeed,” said Anubis. “That is the task that I have for you. You must find Khepre for us. The fate of the world depends upon it.” 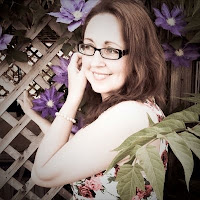 About the Author:
website-FB -Twitter
Blog
Columbkill Noonan has an M.S. in Biology (she has, in turn, been a field biologist, an environmental compliance inspector, and a lecturer of Anatomy and Physiology).

When she's not teaching or writing, she can usually be found riding her rescue horse, Mittens, practicing yoga (on the ground, in an aerial silk, on a SUP board, and sometimes even on Mittens), or spending far too much time at the local organic, vegan market.