When the heroes have reputations like these, who needs a villain? 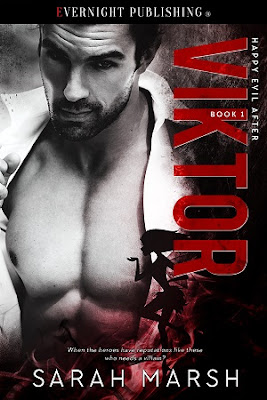 Viktor (Happy Evil After Book 1)
by Sarah Marsh
June 21, 2017
Genre: Paranormal Romance
Publisher: Evernight Publishing
Add to Goodreads
Pandora is a Fairy Godmother who’s never fit in with her own people. Only she has the power…and the attitude, to step in and help those who others have decided aren’t worthy of a happy ending. How hard could it be to manipulate some of the most feared beings in their world?

Viktor has spent his entire un-dead life being the bogey man to the paranormal community and that’s the way he wants to keep it....with everyone else far away from him. When the opportunity arises to take his revenge on his nemesis, he can’t resist—even if it means risking his reputation and rescuing the damsel in distress.

Halle never expected to find herself in need of a savior, especially one with a reputation like Viktor’s. But she’s used to listening to her instincts and her cat trusts the strange woman who pops up and claims to have some solutions.

If a girl can’t trust her own Fairy Godmother, then what is this world coming to?

This is such a unique story! The blurb alone makes me want to read this book and once I started I couldn’t stop. The romance is both sweet and seriously hot. I’m thinking some ice water on the side while reading this story would not be a bad plan.
- The TBR Pile

Viktor by Sarah Marsh is the first in the Happy Evil After series. I love this series!!! Dark fairies, humor, sizzling heat, and did I mention humor. This is one of those stories I did not want to end. I loved it and want more from this amazingly well written series. Bring on the dark fairies and the questionable paranormals Dori saves.
- Tina, Goodreads Reviewer


Take an inside look at Viktor. Read this sizzling excerpt from the book.

"I mean you no harm, lady. You can go. I'm only here for what's in the car," he said slowly walking towards her. She was a cute little thing, all soft curves with golden skin and hair.
"Ummm, yeah, about that … I'm what's in the car, Mr. Krescech. You have to take me with you out of here," she said almost nervously, those big green eyes pleading with him.
Clearly, she was also insane. What was with the women he was running into this week? Viktor had had more than his fair share of groupies throwing themselves at him in the bars, wanting to take a walk on the wild side for a few hours, but this wholesome little beauty certainly didn't look like the type, so he had no idea exactly what she was asking him for.
"I don't think so," he said, moving past her towards the open back door to search the car.
"Seriously, there's nothing else in the car. They were taking me from my family and my pard to be married to Conrad. I have to go with you to get away from him," she continued, putting her tiny little hands on her very curvy hips in a way that distracted him far more than it should have.
Interesting, so this little number was a leopard shifter? Viktor hadn't really had any interaction with the pard in this country, but by reputation, they were a good lot. Why on Earth would she agree to marry Conrad?
"I don't rescue damsels in distress. I eat them," he said with a flash of fang. "So run along, little kitten."
The tiny spitfire threw her hands dramatically up in the air and sighed loudly.
"You just saved me from a life of baby-making slavery. Aren't you supposed to whisk me away to your super-secret villain lair and ravish me? Sheesh, where's your follow-through?"
Viktor just stood there and stared at her for a moment. He didn't know whether to laugh at her ridiculous statement or take her up on her offer and bend her over right here on the trunk of Conrad's car. He was extremely turned on by the fact that she didn't seem the least bit afraid of him. He'd always tried to pretend that his reputation in the paranormal community pleased him, that it helped him by keeping the rabble away. But deep down it bothered him that everyone always thought the worst of him. His honor was just yet another thing that Melisandre and Conrad had stolen from him when they took his mortality.
"Don't you know who I am, woman?" he finally said as she just stood there looking at him expectantly.
"Yes, I know who you are. Who else is capable of keeping me out of Conrad's douchy hands?"

website-FB-Twitter
Instagram-Amazon Author Page
Bookstrand Author Page
SME Street Team Facebook Page
Sarah Marsh was born in British Columbia where she still lives, she has only recently began her writing career finding it the perfect outlet for taking the edge off a nine to five office job. She's been a science fiction and romance junkie for years and when her imagination started to take the characters she'd read about even further in their adventures she decided to try writing something of her own.

Sarah's also a former pastry chef and spends a lot of time cooking and baking for friends and family as well as painting and knitting. Her biggest weaknesses are animals of any kind…she even loves the ones that wake you up at four in the morning because they can almost see the bottom of their food dish.

When it comes to life in general she's a big believer that laughter is the best medicine and that there's no such thing as too much love, which is why she's such a sucker for a happy ending.
To receive regular updates from the author, join Sarah Marsh's newsletter.