Guest Post-Author Mandy Jackson-Beverly : What Do Writers Do When They’re Not Writing?

What Do Writers Do When They’re Not Writing?

What Do Writers Do When They’re Not Writing
Someone recently asked me what I do when I’m not writing. Like most writers I write every day, but not always on my current story, The Creatives Series. Sometimes I write essays for online platforms such as the Huffington Post, or book reviews for the New York Journal of Books. I enjoy writing non-fiction stories based on my own life, and satirical and political essays - although these days it’s difficult to separate the two – and posts on causes I feel strongly about, such as education, immigration, human rights, and animal rights.

Yes, but how do ewe unwind, Mandy?
I can see my family members rolling their eyes and whispering in the background, “She doesn’t know how!” I’m going to ignore them and say that once I’ve swept up the dust bunnies lurking in corners around the house, I’ll either research, read, paint, go for a hike with Cash the wonder dog, or curl up with my cat, Luna, and watch a movie (if she so chooses – cats are soooo fickle with their love). With this in mind, I thought I’d share a few of my favorite dark fantasy go-to movies. They’re not necessarily in order, and often my choice of movie depends if either the sun or moon is shining, or how my ‘freaked-out’ monitor is registering after writing. 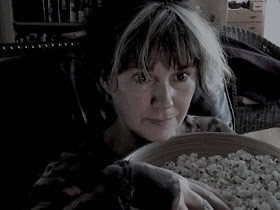 Pan’s Labyrinth
A brilliant story and script written and directed by Guillermo del Toro, and filled with spellbinding characters, fabulous art direction, makeup and costumes. The attention to detail throughout this piece is extraordinary, and the haunting music and historical references feed and nurture my creativity.

Penny Dreadful
Dark and delicious storytelling at its best! Excellent casting, with a stand-out performance by Timothy Dalton, followed closely by Eva Green, Josh Hartnett, Harry Treadaway, Reeve Carney, Rory Kinnear, Patti LuPone, Billie Piper and quite frankly, the entire cast. Locations are stunning, made extraordinarily eerie and chilling with blue-tinged lighting, fog and mist. Attention to detail: bloody mucous, dirty fingernails and even dirtier teeth (Gross, but exquisite!). And of course the costume designer in me salivates over the immaculate wardrobe, hair, makeup, and set design.

Nosferatu the Vampyre
Directed by Werner Herzog, this 1979 depiction of the classic vampire tale, Dracula, is drenched with tension and dread. Apart from the dark and broody locations, Herzog created one of the sexiest scenes ever filmed, albeit played by an ugly bat-faced demon. Klaus Kinski as Dracula oozes with sexuality when he finally - with slow and sensual deliberation - plunges his fangs into the pale and luscious neck of Lucy Harker, played by the beautiful Isabelle Adjani.

The Awakening
The era (1921), the location (creepy boy’s boarding school in England), the directing (Nick Murphy), actors, and script (Stephen Volk and Nick Murphy), all culminate to bring a chilling, hold-your-breath thriller of a story.

Only Lovers Left Alive
Tilda Swinton can bring anything to life, even a centuries old vampire! Team her with a moody rare-guitar-collecting vampire played by Tom Hiddleston, John Hurt as an eclectic Christopher Marlow, and lines like “Little Jack White,” and this film written and directed by Jim Jarmusch is akin to watching poetry come alive on the screen.

Race With The Devil
This 1975 classic features a young motorcycle riding Peter Fonda. I saw this when it first came out (yeah, crazy, right?) and vowed never ever to open a cupboard on a winnabago!

What We Do In The Shadows
Purely because Jermaine Clement, Rhys Darby and Taika Waititi J “Werewolves, not swearwolves.”

The Cabinet of Dr. Caligari
This 1920s silent horror film classic reminds me to keep pushing boundaries. A brilliant example of unique art direction, acting, and overall creativity, and one of my favorite pieces of cover art. Check out the opening shot of the somnambulist in the trailer – awesomeness! I recently reviewed James Morrow’s novella The Asylum of Dr. Caligari that is loosely based on the film, and is a book I highly recommend.

On my TBW list: The Babadook, The Witch, and The Devil’s Backbone.

I’m always eager to hear about dark fantasy visually stunning movies, so please let me know if you have any to add!

Where to find ewe, Mandy?
mandyjacksonbeverly.com

A painting with secrets only one woman can reveal.

In this fast-paced second installment of The Creatives Series, Creative (mystic artist) Coco Rhodes is surprised by a horrific vision beneath her most recent painting: the violent attack upon a fragile young girl. When a link is discovered between an education-finance fraud and several girls disappearing from Washington, D.C. schools, Coco’s lover and leader of the Allegiance, the vampire-warlock Gabriel, vows to rescue the girls, and topple a corrupt congressman. Concurrently, the dark and twisted past of Kenan, the Allegiance's sworn enemy, is revealed. With Kenan’s whereabouts unknown, members of the Allegiance begin to unravel his sadistic plan.

From New York and D.C., to Tuscany and the Dolomite Mountains of Northern Italy, the supernatural guardians of the Allegiance are guided by both the lessons of history and the shocks of present-day life. Through magical twists and otherworldly subplots, this supernatural thriller weaves a web of intrigue, love, and conflict. In The Devil and the Muse, Coco’s sense of duty to the Allegiance is tested. But will protecting her loved ones cause her to sacrifice her humanity?

Mandy Jackson-Beverly was born in the bustling town of Pyramid Hill, Victoria, Australia ... Population: 419. This remote childhood kick-started Mandy’s imagination, as did the rugged coastline and rolling hills of Tasmania, where her family relocated when she was four years old.

About the Author:
website-FB-twitter
Instagram-Pinterest-Linkedin
Amazon
HuffingtonPost
New York Journal of Books
In 1982, Mandy moved to London, where she discovered the importance of the creative collective: The 1980s fashion scene. A year later, in Los Angeles, she found her own creative freedom among the thriving, no-holds-barred visionaries of the music video world. As a costume designer and stylist Mandy worked for photographer Herb Ritts, and directors Joel and Ethan Coen, David Fincher, and Julien Temple, and music icons David Bowie, Madonna, and Tina Turner, to name a few.

Mandy has taught Advanced Placement Art, written and directed high school theater productions, is a contributor to The Huffington Post and a book reviewer for The New York Journal of Books. She resides in Ojai, California, with her husband, Brian Beverly, a crossed-eyed cat, Luna, a dog named Cash and, sometimes, her sons, Angus and Jack.