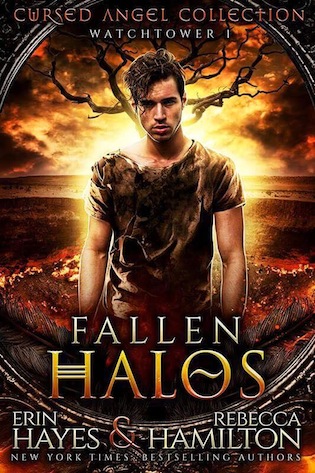 Half insane after the death of his wife and daughter, Rahym runs a lodge near the Door to Hell. With a sector curse that causes anyone to collapse into Hibernation after four hours of exertion, a stay at the lodge is the only way for people to cross the Karakum Desert without falling victim to fire or demonlings.

Then Nakir, an old friend and the angel leading the rebel group known as Halos, appears with a plan to break the curse. He’s brought Rahym’s childhood love Jennet whose special witch powers may be to be the tipping point the resistance needs to win.

But first, they’ll have to brave Hell itself.

They just need Rahym to show them the way. He’ll have to decide if he’s willing to risk his life for a cause he once believed in. Or if there’s even enough left of the world worth saving.

I still, recognizing the voice. A million and one memories seem to physically hit me, sucking the air out of my lungs.

Please don’t let it be him. Please don’t… both my subconscious and I chant.

I really don’t want to deal with that asshole right now. Or ever again, for that matter.

I get my answer. One of the hooded riders dismounts, landing in the sand. He lifts the hood back and looks at me, his emerald green eyes glowing with unearthly power. The sharp planes of his face are exaggerated by the light from the Door as he gives me a lopsided smile.

“Nakir,” I say, with a false sense of bravado, and I wish I were seeing him under different circumstances. I’ “What are you doing here?”

The smile grows, as a second rider swings a leg over the side of their horse. The rider strides up next to the asshole that I blame for the shattered remains of my life. This much closer, I can see that it’s a woman, although she doesn’t lift her hood, so I can’t see her face.

“We’re on the road, Rahym,” Nakir says, drawing my attention back to him. “And we need your help.”

“I’m flattered, but I don’t do that anymore. People tend to die around you.”

To my surprise, the woman next to Nakir chuckles mirthlessly. She may be crazier than I am. Not a good sign.

Nakir exchanges a glance with the woman. She pulls back her hood, and from the depths of my memory, I recall her.

Well, this night has taken an unexpected turn.

“Jennet,” I say, calling out her name. It’s been years, and the last time I saw her, we were teenagers, but the curve of her lips tells me that I identified her correctly. A new sort of horror overtakes me; what is Jennet doing with Nakir?

“Hello, Rahym,” she says in a clear voice. “We’re going to lift the curse. And we need you to lead us through the Door to Hell.” 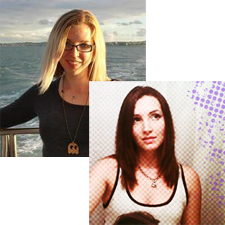 Erin Hayes
FB-Twitter-Instagram
Street Team-Newsletter
Sci-fi junkie, video game nerd, and wannabe manga artist Erin Hayes writes a lot of things. Sometimes she writes books.
She works as an advertising copywriter by day, and she's an award-winning New York Times Bestselling Author by night. She has lived in New Zealand, Hawaii, Texas, Alabama, and now San Francisco with her husband, cat, and a growing collection of geek paraphernalia.
You can reach her at erinhayesbooks@gmail.com and she’ll be happy to chat. Especially if you want to debate Star Wars.

Rebecca Hamilton
Website-FB-Twitter-Amazon
NEW YORK TIMES, USA TODAY, and WALL STREET JOURNAL bestselling author Rebecca Hamilton lives in Georgia with her husband and four kids, all of whom inspire her writing. Somewhere in between using magic to disappear booboos and sorcery to heal emotional wounds, she takes to her fictional worlds to see what perilous situations her characters will find themselves in next. Represented by Rossano Trentin of TZLA, Rebecca has been published internationally, in three languages.