Book Review: The Rules of Magic: A Novel (The Practical Magic Series Book 1) by Alice Hoffman 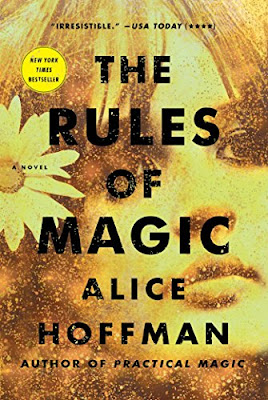 The Rules of Magic: A Novel (The Practical Magic Series Book 1)

For the Owens family, love is a curse that began in 1620, when Maria Owens was charged with witchery for loving the wrong man.

Hundreds of years later, in New York City at the cusp of the sixties, when the whole world is about to change, Susanna Owens knows that her three children are dangerously unique. Difficult Franny, with skin as pale as milk and blood red hair, shy and beautiful Jet, who can read other people’s thoughts, and charismatic Vincent, who began looking for trouble on the day he could walk.

From the start Susanna sets down rules for her children: No walking in the moonlight, no red shoes, no wearing black, no cats, no crows, no candles, no books about magic. And most importantly, never, ever, fall in love. But when her children visit their Aunt Isabelle, in the small Massachusetts town where the Owens family has been blamed for everything that has ever gone wrong, they uncover family secrets and begin to understand the truth of who they are. Back in New York City each begins a risky journey as they try to escape the family curse.

The Owens children cannot escape love even if they try, just as they cannot escape the pains of the human heart. The two beautiful sisters will grow up to be the revered, and sometimes feared, aunts in Practical Magic, while Vincent, their beloved brother, will leave an unexpected legacy. Thrilling and exquisite, real and fantastical, The Rules of Magic is a story about the power of love reminding us that the only remedy for being human is to be true to yourself.

The Rules of Magic is a prequel to Practical Magic, one of Hoffman’s best-known stories turned movie. It tells the tale of three siblings from a magical family: Franny, Jet, and Vincent Owens. Despite their mother’s best efforts to shield her children from their magical heritage, the three come into their abilities while coming of age in 1960s New York City.

Although this book is largely fantastic, it’s rooted in the reality of love and loss. The magical aspects of the story are touching and imaginative; just beyond the grasp of everyday life. Hoffman almost convinces her readers that if you dig a little deeper you too could be magical, and it’s because her characters are so human and so connected to the human experience, especially love and loss. As an elderly Owens aunt remarks, “Once upon a time I was young and beautiful. But that is the fairy tale, because it all happens in the blink of eye.” Ain’t that the truth.

Readers will adore these characters, especially Vincent whose reckless behaviour incites both tension and tenderness. You will become entrenched in their choices knowing there’s nothing you can do to prevent their inevitable pain. And because they are all victims and perpetrators their pain is justifiable and all too real. No one writes grief like Hoffman; it is all at once beautiful and devastatingly heartbreaking. Character relationships in Rules of Magic are ever-touching. The story asserts “when you truly love someone and they love you in return, you ruin your lives together.” What Hoffman does, however, is show readers that love is worth ruin. It’s magical, but it’s real, and, most of all, it’s hopeful.

As a long-time Hoffman fan, I’ve become accustomed to two certainties; while reading her books -- these whimsy-meets-realism treasures -- I’ll be wholly enchanted, but inevitably heartbroken. To be fair, Hoffman warns you of what’s to come. Her characters both celebrate and lament their humanity, all the while sensitive to the pain life inevitably brings. And so when I read a Hoffman story, I do so with a perpetual lump in my throat and a smile on my face.

About the Author:
website-FB-twitter
Alice Hoffman was born in New York City on March 16, 1952 and grew up on Long Island. After graduating from high school in 1969, she attended Adelphi University, from which she received a BA, and then received a Mirrellees Fellowship to the Stanford University Creative Writing Center, which she attended in 1973 and 74, receiving an MA in creative writing. She currently lives in Boston and New York.

Hoffman's first novel, Property Of, was written at the age of twenty-one, while she was studying at Stanford, and published shortly thereafter by Farrar Straus and Giroux. She credits her mentor, professor and writer Albert J. Guerard, and his wife, the writer Maclin Bocock Guerard, for helping her to publish her first short story in the magazine Fiction. Editor Ted Solotaroff then contacted her to ask if she had a novel, at which point she quickly began to write what was to become Property Of, a section of which was published in Mr. Solotaroff's magazine, American Review.

Since that remarkable beginning, Alice Hoffman has become one of our most distinguished novelists. She has published a total of eighteen novels, two books of short fiction, and eight books for children and young adults. Her novel, Here on Earth, an Oprah Book Club choice, was a modern reworking of some of the themes of Emily Bronte's masterpiece Wuthering Heights. Practical Magic was made into a Warner film starring Sandra Bullock and Nicole Kidman. Her novel, At Risk, which concerns a family dealing with AIDS, can be found on the reading lists of many universities, colleges and secondary schools. Her advance from Local Girls, a collection of inter-related fictions about love and loss on Long Island, was donated to help create the Hoffman (Women's Cancer) Center at Mt. Auburn Hospital in Cambridge, MA. Blackbird House is a book of stories centering around an old farm on Cape Cod. Hoffman's recent books include Aquamarine and Indigo, novels for pre-teens, and The New York Times bestsellers The River King, Blue Diary, The Probable Future, and The Ice Queen. Green Angel, a post-apocalyptic fairy tale about loss and love, was published by Scholastic and The Foretelling, a book about an Amazon girl in the Bronze Age, was published by Little Brown. In 2007 Little Brown published the teen novel Incantation, a story about hidden Jews during the Spanish Inquisition, which Publishers Weekly has chosen as one of the best books of the year. In January 2007, Skylight Confessions, a novel about one family's secret history, was released on the 30th anniversary of the publication of Her first novel. Her most recent novel is The Story Sisters (2009), published by Shaye Areheart Books.

Hoffman's work has been published in more than twenty translations and more than one hundred foreign editions. Her novels have received mention as notable books of the year by The New York Times, Entertainment Weekly, The Los Angeles Times, Library Journal, and People Magazine. She has also worked as a screenwriter and is the author of the original screenplay "Independence Day" a film starring Kathleen Quinlan and Diane Wiest. Her short fiction and non-fiction have appeared in The New York Times, The Boston Globe Magazine, Kenyon Review, Redbook, Architectural Digest, Gourmet, Self, and other magazines. Her teen novel Aquamarine was recently made into a film starring Emma Roberts.