Story Behind the Story: Amid the Winter Snow Anthology with Jeffe Kennedy

Timing can become a funny thing when writing a series, particularly for those of us who don’t extensively pre-plot. I kind of have an idea of where the overall arc is headed, but the specifics often escape me until I actually write the story.

It’s like I know I’m driving from Seattle to New Orleans. I know I’ll have to cross the Rocky Mountains at some point, so there’s that. And I went to college in St. Louis, so that’s always a good place to stop. I have old friends there, which means I might end up staying extra days. Those secondary characters have a way of luring one off the schedule.

My story in AMID THE WINTER SNOW is a novella that takes place in between THE PAGES OF THE MIND and THE SHIFT OF THE TIDE. And it happens concurrently with THE EDGE OF THE BLADE. That’s the other interesting thing about The Twelve Kingdoms and The Uncharted Realms books: because each story is from a different hero or heroine’s exclusive perspective the story goes with them. This was a simple scenario at the beginning of THE MARK OF THE TALA, the book that started it all, because the point-of-view (POV) heroine, Andi, was with her sisters and the plot centered entirely on the events taking place in and around Castle Ordnung.

But soon the sisters were separated, and then each went on her own adventure, in different places, at different times. Still, the original trilogy happened sequentially, with the chronological story handed from Andi to Ami (THE TEARS OF THE ROSE), then to Ursula (THE TALON OF THE HAWK). After that, however, with each new character and the growing complexity of the overall arc and everyone’s contribution to that, the timelines began to overlap.

When Thea Harrison asked me if I’d like to be part of her midwinter holiday anthology, I knew the story I wanted to write. All along I’d known, via hints dropped by other characters, that Ami and Ash had gone to Windroven for the winter. And they’d taken the twin prince and princess with them. This is how I find things out in my stories. Not because I plan them, but because the characters tell me. The problem is, everyone knew there might be a dragon beneath the volcano at Windroven, which made them going there—with the heirs, no less—an exceedingly bad idea.

All the elements for Thea’s concept were there: midwinter holiday, snow, fantasy, romance. All I needed to do was figure out why they went there!

I was also deep into writing THE SHIFT OF THE TIDE, and I knew that part of Zynda’s quest was going to Windroven to deal with the dragon. Because Ursula was worried about it. I ended up having to pause that story and write THE SNOWS OF WINDROVEN, so I could figure out what happened there before Zynda arrived.

The other interesting piece of this is that THE SNOWS OF WINDROVEN revisits Ash and Ami’s love affair—which makes it the only time (so far) that I’ve added onto one of the main tales. This story switches to Ash’s POV, which made a difference, and I think it filled in a crucial piece. Of all the romances, Ami and Ash’s remained the most tenuous. They both have so many issues and conflicts that resolving everything so they can be happy together will take a long time.

But nothing like a little peril and being snowbound to force a couple to confront their problems, eh?

This story also let me spend a little more time with the young prince and princess, Astar and Stella, or Willy and Nilly, as they’re dubbed. All along I’ve had a story in mind for when they grow up. We might get there someday! 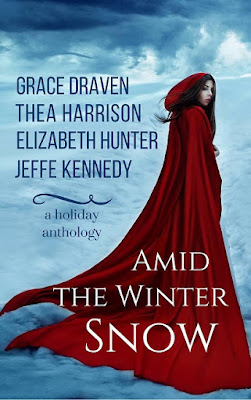 Amid the Winter Snow
Authors: Grace Draven, Thea Harrison, Elizabeth Hunter, Jeffe Kennedy
December 12, 2017
454 pages
As the snows fall and hearths burn, four stories of Midwinter beginnings prove that love can fight its way through the chillest night…
The Darkest Midnight
by Grace Draven
The mark Jahna Ulfrida was born with has made her a target of the cruel and idle all her life. During the long, crowded festivities of Deyalda, there’s nowhere to escape. Until a handsome stranger promises to teach her to save herself…

The Chosen
by Thea Harrison
In her visions, Lily sees two men fighting for her tiny country’s allegiance: the wolf and the tiger, each deadly, each cunning. One will bring Ys chaos and death, one a gentler path—but she’s destined to love whichever she chooses. The midwinter Masque is upon them, and the wolf is at her door…

The Storm
by Elizabeth Hunter
When her soul mate died in a massacre of the half-angelic Irin people, Renata thought she’d never feel happiness again. She’s retreated to the snowy Dolomites to remember her hurts—until determined, irrepressible Maxim arrives to insist on joy, too. And before she can throw him out, they discover a secret the Irin have to know…

The Snows of Windroven
by Jeffe Kennedy
As a blizzard threatens their mountain keep, the new Queen Amelia of the Twelve Kingdoms and her unofficial consort Ash face their own storm. Ash knows a scarred, jumpy ex-convict isn’t the companion his queen needs. But when a surprise attack confines them together in their isolated sanctuary, the feast of midwinter might tempt even Ash into childlike hope…
Amazon-Smashwords-Google Play-Kobo -iBooks-Barnes & Noble

About the Author:
website-FB-twitter
Goodreads
Jeffe Kennedy is an award-winning author whose works include novels, non-fiction, poetry, and short fiction. She has been a Ucross Foundation Fellow, received the Wyoming Arts Council Fellowship for Poetry, and was awarded a Frank Nelson Doubleday Memorial Award.

Her award-winning fantasy romance trilogy The Twelve Kingdoms hit the shelves starting in May 2014. Book 1, The Mark of the Tala, received a starred Library Journal review and was nominated for the RT Book of the Year while the sequel, The Tears of the Rose received a Top Pick Gold and was nominated for the RT Reviewers’ Choice Best Fantasy Romance of 2014. The third book, The Talon of the Hawk, won the RT Reviewers’ Choice Best Fantasy Romance of 2015. Two more books followed in this world, beginning the spin-off series The Uncharted Realms. Book one in that series, The Pages of the Mind, has also been nominated for the RT Reviewer’s Choice Best Fantasy Romance of 2016 and won RWA’s 2017 RITA® Award. The second book, The Edge of the Blade, released December 27, 2016, and is a PRISM finalist, along with The Pages of the Mind. The next in the series, The Shift of the Tide, will be out in August, 2017. A high fantasy trilogy taking place in The Twelve Kingdoms world is forthcoming from Rebel Base books in 2018.

In 2019, St. Martins Press will release the first book, The Orchid Throne, in a new fantasy romance series, The Forgotten Empires.

Jeffe can be found online at her website: JeffeKennedy.com, every Sunday at the popular SFF Seven blog, on Facebook, on Goodreads and pretty much constantly on Twitter @jeffekennedy. She is represented by Sarah Younger of Nancy Yost Literary Agency.
Sharon Stogner at 12:30 AM
Share