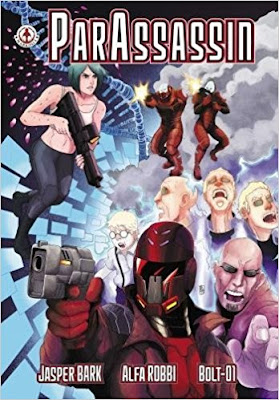 One assassin’s bullet will decide.

On the planet Sedulon, a rogue band of renegade time travelers and scientific misfits fight to save the futures of two worlds.

Doc Hydrabus - a brilliant scientist whose body splits into a crowd of his past and selves, he lives in one present and many futures all at the same time

Cassindra - 900 years old, impossible to kill and every bit as deadly as she is beautiful. She’s travelled back in time to change the world.

Rushaar and Shartara - alien beings made entirely of gas with one simple plan, to use time travel to assassinate the leader of Sedulon and save their planet Eidolonia.

The Parassassin - he will take the shot that decides the destinies of everyone in the galaxy.

Politics and parody collide on the bleeding edge of science fiction, in the most shocking and unexpected thriller you’re going to read this year.

Quantum physics, wormholes, time travel…oh, my! Time travel stories make my head hurt. Not because I don’t understand, but because for the story to work I have to accept the plot holes and have to let some bullsheep slide. But in Parassassin it all makes sense and all the loose ends I tend to dwell on are wrapped up and explained. This might not seem like a big deal, but to me it was amazing.

I’m not sure of the brain gymnastics writer Jason Bark had to achieve to make this story work, but it does and it was a lot of fun to read. People from different futures and timelines are trying to either prevent or cause the death of one man whose actions will doom their futures. In the center of all this mess is Dr. Hydrabus. Due to a wormhole generator accident he now physically splits into his future, present and past selves. After a few hours, these selves snap back into the one man only to split again into more versions of his future and past selves adding a lot of humor to the mystery and action plot.

There are many surprise twists and turns and at times things are confusing, but it all works out and makes sense. I even enjoyed rereading it and appreciating how the story was put together.

About the Author:
website-FB-twitter
Youtube
Jasper Bark finds writing author biographies and talking about himself in the third person faintly embarrassing. Telling you that he’s an award-winning author of four cult novels including the highly acclaimed ‘Way of the Barefoot Zombie’, just sounds like boasting. Then he has to mention that he’s written 12 children’s books and hundreds of comics and graphic novels and he wants to just curl up. He cringes when he has to reveal that his work has been translated into nine different languages and is used in schools throughout the UK to help improve literacy, or that he was awarded the This Is Horror Award for his last anthology ‘Dead Air’. Maybe he’s too British, or maybe he just needs a good enema, but he’s glad this bio is now over.

Artist: Alfa Robbi
website
Hi I'm a freelance comic artist basically I did Penciling and Inking, also I can do many kind of Illustration, Character design, Concept art, Manga and T-shirt design.

Please feel free to take a look in my gallery and if you think my work will fit to your project please contact me at alfa.papillon@gmail.com
Sharon Stogner at 12:30 AM
Share