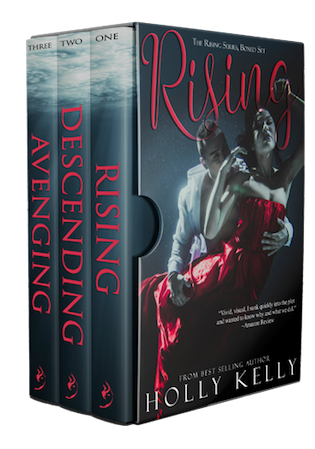 
This value-priced boxed set includes the first three novels in the best-selling Rising series: Rising (with an exclusive bonus scene), Descending, and Avenging. Beautifully packaged with brilliant new cover art, this set is perfect for any fan of Greek Mythology and Mermaid Romance stories. Order the Rising series today and submerge yourself in an underwater world full of passion, romance, intrigue, and adventure.

Rising: Contains a newly released scene! In a war between the humans and the inhabitants of the sea—humans will lose. Xanthus Dimitriou—the most lethal Dagonian to rise from the ocean—is on a mission to save mankind from annihilation. There’s just one thing standing in his way: the life of a beautiful young woman…

Descending: When Xanthus cashes in a long-standing favor, Kyros is faced with doing two things he thought he’d never do—protect a mermaid and live on land.

Avenging: Two thousand years ago, King Triton witnessed the slaughter and total annihilation of his merchildren. Devastated by the loss, he vowed to never again father a child. Powerful, handsome, and eternally youthful, Triton was no stranger to seduction—yet his resolve was unwavering…until he met Nicole.

EXCERPT:
He knew what he had to do, what he’d done countless times before. As a trained soldier, he had a sacred duty to protect his people, guard their secret, and uphold the law. This female’s presence here was not only a criminal act, but it also presented an imminent threat. And because of that, his course was clear.

He had to kill her.

His plan lay clearly before him. Blanketed in the shadows, he’d enter her apartment window. Moving silently, he’d strike fast. Before she could cry out for help, he’d have her throat slit wide open. With her blood flowing swiftly, she’d be dead in mere seconds. The fact that she bathed at this time added to the ease of the execution. Clean up would be simple. Before the night ended, it would be as if she’d never existed. The Dagonian threat of exposure would be wiped clean from the human world.

Xanthus stood, his feet rooted in place under her window. Her sweet scent surrounded him as he listened to her pitiful sobs. Then, in that moment, he did the most shameful thing he’d ever done in his life.

He made his way back to his vehicle and climbed behind the wheel. He leaned his head back against the seat, closed his eyes, and attempted to clear his head.

He’d be back and she would die. She deserved to die. She may have the voice of an angel, but that was a lie. She was a traitor, a threat to their people. No other explanation made sense.

Xanthus looked toward the little female’s apartment building across the street. Could she have found a more dangerous place to live? This Dagonian female probably felt at home with these bottom-feeders.

Probably? Aw Hades. He cursed himself and the doubt in his mind. He doubly cursed that he couldn’t seem to stop himself from caring about her welfare. He’d be killing her himself, after all. The traitor had to die, regardless of his feelings and no matter how appealing she was. Of course, if she died by a human’s hands then he wouldn’t…

He shook his head at his own idiotic thoughts. If a human killed her, then her body would be taken to the morgue, for the humans to see. He couldn’t let that happen. He had to be the one to kill her and carefully dispose of her body. And he would, soon. 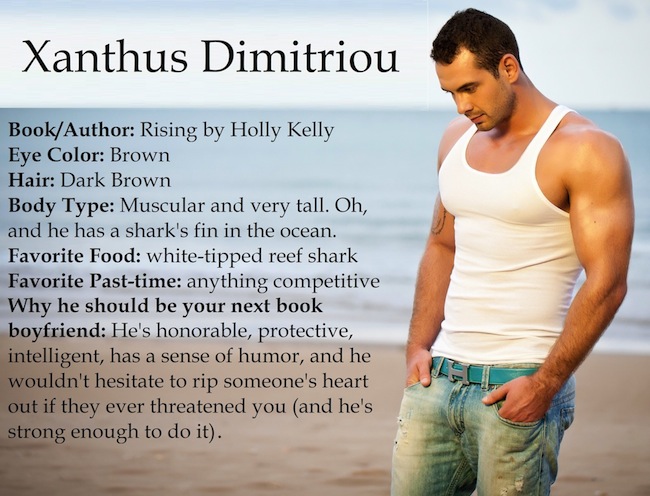 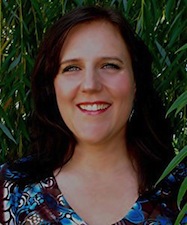 About the Author:
Website-FB-TwitterGoodreads
Holly Kelly is a mom who writes books in her spare time: translation--she hides in the bathroom with her laptop and locks the door while the kids destroy the house and smear peanut butter on the walls. She was born in Utah but moved around a bit, living in Kansas, Texas, and Hawaii where she studied marine biology. She's now back in Utah--"happy valley". She's married to a wonderful husband, James, and they are currently raising 6 rambunctious children. Her interests are reading, writing (or course), martial arts, visual arts, creating Halloween props, and spending time with family.