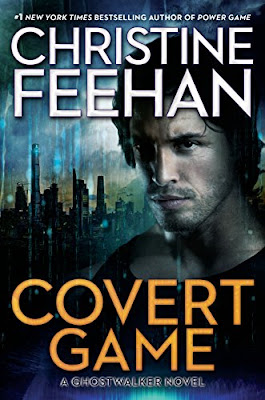 Rescuing an industrial spy from the hands of a criminal mastermind is a suicide mission for the GhostWalkers. And there's no one more up to the task than Gino Mazza. He's the perfect killing machine--a man driven by demons so dark and destructive that his blighted soul has given up trying to find solace. But his laser-sharp focus on his target has transformed into something nearing desire.

A treasonous senator dangled top secret GhostWalker data in front of a Chinese crime lord, and he bit. Zara Hightower, one of the world's leading experts on artificial intelligence, was sent in to psychically wipe the crime lord's computer network. She succeeded, but at a huge cost. Now she's the captive of a man who has descended into paranoid madness. Torture and death await her...

But GhostWalkers never leave one of their own in enemy territory. And it's up to Gino to save Zara, or kill her if it turns out she's led them into a trap. Either way, heaven or hell won't stop him.

Gino Mazza is a GhostWalker who is sent on a rescue mission with his team. The only problem, this could be a suicide mission or a trap. The GhostWalkers all have enhanced abilities. He and his team have been in some high stress situations before but this one is going to take just the right timing to pull off.

Zara Hightower is being held against her will after wiping computers of info the people should never have had in the first place. But she wasn't able to get away before they found out the computers were wiped and the hard drives were destroyed. The people in charge aren't sure if or how she did it but she's tortured anyway to try and get the information from her.

Unfortunately, the torture scenes are very graphic, so much so that it made me wince more than a few times. At one point I had to put the book down because it was just that bad. The men are sadists and don't hold back even though after he was done, he told her he had held back and hadn't given her the beating that his partner had wanted him to.

Gino and his team get called in to rescue Zara but she has no idea they're coming. She's given up all hope by the time they do get there. But she's rescued and it was close because the bad guys find out she's gone and try to get her back before the team can get back on U.S. soil. Not only are the GhostWalkers having to keep Zara safe from the men who were holding her and tortured her but the man who sent her on that mission wants her back because she has valuable information that he needs.

Zara gets to know Gino as she's healing and things start heating up right away between the two of them. I really liked them both and thought that they fit really well together. The sex scenes with these two are on fire! I like how gruff and intimidating he is with most people but how gentle and accommodating he is with Zara.

While this book was great and full of action, love, romance and fun. It's also not for the faint of heart because of the graphic torture scenes. The secondary characters are great, I like that we really get to know some of the other GhostWalkers and their wives and kids. This book kept me up past my bedtime because I had to see what was going to happen next. I highly recommend this book, especially if you're already a fan of the series. While this book can be read as a standalone, it would be better to start from the beginning to get a better idea where the GhostWalkers came from and how they came about in the first place.

About the Author:
website-FB-twitter
I write every day and have done so since I was old enough to pick up a pen. (I spent a lot of time getting in trouble at school for writing instead of doing the things I was supposed to do.) Once I create my characters, I try very hard to have them react to situations as they really would. Sometimes I have preconceived ideas of what I would like them to do, but they don't mind  because it would be out of character for them. They take on a life of their own. Sometimes when I throw difficult situations at them in the hopes I'll get a certain reaction and they don't do what I want, I complain bitterly to my husband and he laughs at me. Still, it is important to me to have them be real, not perfect people, so they make mistakes we lesser mortals might make.
Sharon Stogner at 12:00 PM
Share