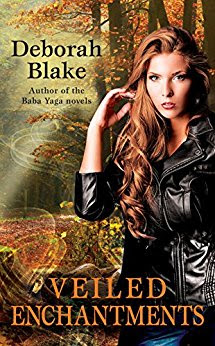 Veiled Enchantments (Veiled Magic #3)
by Deborah Blake
March 20, 2018
236 pages
Publisher: InterMix
In this exciting novel in the Veiled Magic series, Witch and police officer Donata Santori travels to Maine to help solve a deadly mystery, where her magical abilities are tested like never before.


Still reeling from her unwitting involvement in murder and subsequent break up with a half-Dragon art forger, Witch-cop Donata Santori is grateful for the distraction when her ex-lover requests her help. Not only are Magnus's beloved dead suddenly haunting the Ulfhednar shapechangers in his tiny rural hometown in Maine, their patron god Odin has turned his back on them, and the members of their once tight-knit enclave are at each other's throats. Literally.

Magnus is relying on Donata's experience in dealing with the gods, along with her magical ability to summon the dead, to help him unravel this mystery in time to save his clan. Donata only hopes to survive the ordeal so she can return home to the city and her quiet job at the precinct.

But first, she must discover who or what is behind the terrible attacks on the Ulfhednar. And the clock is ticking, in more ways than one...

I adore this series. Veiled Magic is an urban fantasy series detailing the adventures of witch-cop Donata Santori. In this installment, Donata travels to a tight-knit Ulfhednar (shapechanger) community in Maine at the behest of her ex Magnus. According to Magnus, members of the community’s elite trainees are being haunted by the ghosts of their dead loved ones. Additionally, the Ulfhednar clan has been seemingly abandoned by Odin, their patron god. This poses a major threat to the clan and their survival. Donata’s specialized ability to communicate with the dead and deities alike becomes an invaluable commodity in the community’s search for answers.

Donata is a likeable, strong female main character. She’s still dealing with fallout from her adventures in the previous two books, however, her unique transition into Ulfhednar territory is well-crafted. Readers of this series are familiar with Magnus from previous installments. Veiled Enchantments gives us a complete view of his character and family background. And I must say, I think I’m in love. Veiled Enchantments has something for every urban fantasy fan including action, intrigue, fantasy, and romance. This book is wholly satisfying while setting the scene for future installments. Veiled Magic is an absolute favourite urban fantasy series.

Don’t miss out on this stellar series.

Exclusive Excerpt
“O’Malley,” her boss answered.
“Please tell me that none of your friends has set another building on fire, Santori. I’m not in the mood to make up lies for the fire department tonight.” To anyone else, this probably would have sounded intimidating, but Donata was used to dealing with the Chief, and if anything, he sounded resigned rather than peeved.


“Nope, not this time,” she said. “I’m sorry to bother you so late, sir, especially on the weekend.”

“Ha,” he said. “Tonight is my wife’s bridge night and the house is filled with women drinking cocktails with silly names and talking about TV shows I never watch. I’m hiding out in my office catching up on paperwork. Which I hate almost as much as bridge. Feel free to interrupt me. A nice bizarre case might be a relief at this point.”

“Sorry again, sir. No cases, bizarre or otherwise.” She took a deep breath. “I, uh, I know it is short notice, but I wondered if I could have a week off. Maybe two. Um, starting Monday morning.” She braced herself for the yelling. And possibly a few choice curse words.

There was a brief but noticeable pause on the other end of the phone. “You want to take time off,” the Chief said carefully.

“Yes, sir. I’m sorry about not putting in for it ahead of time, but an old friend showed up tonight who needs my help. Needs my particular talents, if you know what I mean, so he can’t really ask anyone else.”

“Good,” the Chief said. “Take two weeks. Make it three if you need to.”

What the hell? “I’m sorry, what?” Donata said. That was definitely not the reaction she’d been expecting. Oh, goddess, what if he had finally decided that all the weird things she’d dragged to the surface were just too weird after all? “Are you firing me, sir?”

A sigh gusted down the line. “Did I say I was firing you, Santori?” She could hear him crunch down on one of the pencils he regularly chewed on since he’d quit smoking. “You have so much vacation time and sick time built up, HR is always on my ass about getting you to take some. Not to mention that you’ve been through a lot in the past year. Don’t think I haven’t noticed how tired you’ve been looking. To be honest, I was going to sit you down next week and order you to put in for a vacation sometime soon. You just saved me the trouble of doing it.”

“When am I not sure about things, Santori? Now do me a favor, and stop arguing with me,” he said, and hung up on her.

Huh. Well, that was one problem down.

“So, I take it you can have the time off,” Magnus said with a grin. With his Shapechanger hearing, he’d undoubtedly caught every word of both sides of the conversation. “Great. I’ll help you pack.”

“Not so fast. I need to call my friend Doc and see if she can feed the cat.”

Ricky appeared in the space by Donata’s knees, making her jump, as usual.

“I’m staying here, Missus,” he said. “Someone has to look after the place while you’re gone. I’ll feed the cat, no worries. Just stock the fridge before you leave. I can always swipe food from the neighbors, but they eat too much bad Thai takeout.”

“I’m certain,” the little man said. “You go and have fun with Magnus. You could use a break.”

Right, Donata thought. Because trying to wrangle a bunch of ghosts in a town full of antagonistic Shapeshifters while attempting to track down their missing god sounds like a day at the beach. What was really sad was that, after the year she’d had, it probably would be. 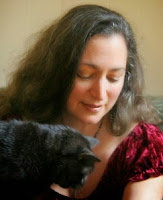 About this Author:
website-FB-twitter-blog
Author of seven non-fiction books from Llewellyn. Circle, Coven & Grove: A Year of Magickal Practice (2007), Everyday Witch A to Z (2008), The Goddess is in the Details (2009), Everyday Witch A to Z Spellbook (2010) Witchcraft on a Shoestring (2010), Everyday Witch Book of Rituals, and The Witch's Broom. I am also the author of the Baba Yaga series from Berkley Romance, including Wickedly Magical (novella), Wickedly Dangerous, and Wickedly Wonderful.
When not writing, Deborah runs The Artisans’ Guild, a cooperative shop she founded with a friend in 1999, and also works as a jewelry maker, tarot reader, and energy healer. She lives in a 100 year old farmhouse in rural upstate New York with five cats who supervise all her activities, both magickal and mundane.
Sharon Stogner at 12:00 AM
Share