3A secret group, marked with a single golden W; it is a place where these deliciously devious earls can indulge in their darkest desires. Though fate may have something else planned for them entirely. 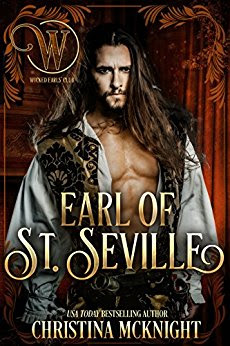 
Lady Patience Lane, daughter of the Earl of Desmond and legendary boxer Ivory Bess, grew up learning to fight, not how to mind her manners. She always expected she’d become a trainer like her mother, until injuries from the ring led to her mother’s untimely death. Now, she’s determined to save other families from the same heartache, by teaching others about the dangers of boxing. Nothing could bring her back to the world she left—until she meets a mysterious stranger who sets her pulse racing.

And a dark, dangerous lord interferes…

Sinclair Chambers, the Earl of St. Seville and known as “Sin” to his cohorts, inherited an insolvent estate. He has to make money, and fast, or his tenants will starve. The prize purses from the bareknuckle mills will go a long way to solving his problems, if he can win them. To be a success in the ring, he needs the best trainer, and Patience Lane is the best there is—all he has to do is convince her that he’ll only fight once.

They just might find their happily ever after in each other’s arms.

The more time Sin and Patience spend together, the closer they become. Soon, Sin’s thoughts are less about winning in the ring, and more about winning Patience’s heart. But can a relationship born out of wicked deception stand the test of time?


Wicked Earls’ Club is an anthology series of 12 books, each written by a different author. Each installment tells the Regency-era tale of a different ‘wicked earl’ and his meandering path to true love. I read installment 11, Earl of St. Seville. Obviously, I was attracted to the concept of an earl bad-boy and his sultry pirate-inspired good looks. While I enjoyed the story well enough, I didn’t find anything particularly wicked about it, ergo I was disappointed.

Lady Patience is an activist and pamphleteer. She aims to educate the masses on the dangers of pugilism, or boxing. Having witnessed the decline and eventual death of her mother, a pugilist champ in her day, Patience wants to spare anyone the hardship her family has endured. Sinclair “Sin” Chambers, the Earl of St. Seville, is in London for one purpose; to save his estate from complete financial ruin. He plans to win prize fights and use the proceeds to save his estate on Brownsea Island. While Patience abhors the thought of Sinclair in the boxing ring, she’s an expert on the sport and agrees to coach him despite her better judgement.

I enjoy historical fiction. I found the subject matter and supporting details of the tale to be interesting and engaging. Ultimately, however, I don’t feel the book lived up to the series title. Where are the wicked? No one in the book behaved particularly wickedly, and Sin, in fact, is not nearly sinful enough. McKnight does a wonderful job building romantic tension between Sin and Patience. However, the ultimate execution was largely unsatisfying.

If you like your romance chaste, Earl of St. Seville is an excellent, entertaining read. If you’re like me and prefer your earls truly wicked, and a little more scintillating, you’re best to give Sin and Patience a pass.


Excerpt
Perhaps she should have knocked.

Before her stood a man, not one of her brothers that she still pictured as boys even though they were two and four years her senior, but instead a true man—stripped to the waist, his back to her.

Thank the heavens above for small miracles.

But to deny that her heart skipped a beat—or ten—would be preposterous. In fact, as Patience stood, unnoticed, studying the man now looking out Merit’s open window, she wondered if her heart would ever beat a normal, steady rhythm again or if her skin would ever cool enough to need an overcoat or shawl. It was only when her lungs began to burn that she realized she’d held her breath since opening the door, a call of greeting stuck in her throat.

So intent on the window, the man failed to notice he was no longer alone.

There was no denying the stranger’s presence—an unfamiliar masculine air filled the room. It was both intriguing and frightening. Certainly, she’d witnessed men in various stages of undress, but this goliath was different. Never had Patience been so utterly aware of her own body, while distracted by the sight of another’s chiseled form. Her hands itched to reach out at the same time they should be raising to cover her exposed flesh, veiled only by her thin nightshift. 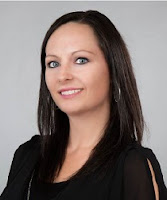 Her books combine romance and mystery, exploring themes of redemption and forgiveness. When not writing she enjoys coffee, wine, traveling the world, and watching television. 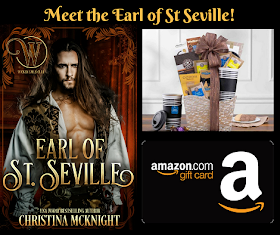 Follow the tour and enter to #win a $100 Amazon Gift Card and a special gift basket!