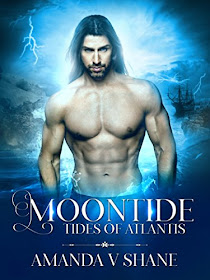 
Upon A Moonswept Tide…
Trapped in time…Ronan Garring is a man of action; a ship captain who has sailed the seas from Europe to the Caribbean…in the seventeenth century. When he is tricked by a sea nymph, he is sent to a deserted island in Poseidon’s realm to serve the gods for all time. On a mission to modern day Miami, he finds his earth home crawling with underworld evil and is waylaid by an enchanting human woman who seems to stall his attempts at completing his quest at every turn. He can’t be sure if she is an entirely innocent wrecking ball or the agent of a more sinister force. Against all his good intentions, he finds himself continually, albeit pleasantly, entangled with her both in this world and beyond.

Searching…for a friend whose gone missing, Cindy Pierce left the Rocky Mountains for the beaches of Miami to try to make sense of, what looks to be, a hopeless case. As the trail grows cold, she stumbles into an intriguing dark stranger and is literally knocked flat. Fierce and intense as he is, towering over her and exuding old world masculinity, she can’t help her body’s immediate response to him. When she finds herself being chased across the southern tip of Miami and into the Florida Keys by the handsome foreigner however, she’s convinced he’s not only psychotic but intent on doing her harm. Once she finds herself in his arms again though, her attraction to him can’t be denied and neither can the fact that he may be the only one who can save her from the dark forces at work on the beach.

This book contains some intimate scenes and adult situations. If such material offends you, please don't buy this book.

Tides of Atlantis Series
Mankind and the gods alike have grown complacent and the restless forces of the underworld that have been simmering beneath the surface are coming out to play. They will not stop until their thirst for vengeance is satisfied and all worlds have returned to yawning pre-time chaos.
Ten lost kings ─ sons of Poseidon─ and rulers of a condemned land are our last hope…if only they can be found. Cursed by the gods after the fall of Atlantis, the kings have passed into anonymity with no memory of who they are. Forces of both good and evil are hunting them. Poseidon needs them to win the war for the universe. Evil is bent on their destruction.

Join the race to find the kings in Amanda V. Shane’s new Tides of Atlantis series and help them to discover their soul mates, the women who will win their lost hearts and help them fulfill their destiny!
amazon

Tides of Atlantis is an exciting new series by author Amanda V. Shane. The series is set to follow the life and love of 10 lost kings of Atlantis, sons of Poseidon. The ancient world of gods collides with our modern landscape in a richly complex tale and reimagining of ancient Greek lore. The series’ premier installment tells the tale of Ronan Garring, a formidable and immortal ship captain from the 17th century and Cindy Pierce, a thoroughly modern woman on a mission in modern-day Miami.

Part paranormal romance, part urban fantasy, Moontide was an entertaining read. The plot is extraordinarily complex and considering Moontide is the first book of the series, loads of set up takes place. I would caution readers against getting too bogged down in the details, because before long the plot ‘clicks’ into place and details begin to make sense. The book is wildly imaginative with a mythological base, which I liked. The character development is effective and the Ronan-Cindy dynamic is well executed.

I’m very excited to see where this series leads. With abundant plot potential and several intriguing characters to explore, I’ll be looking for book two.

About the Author:
website-FB-twitter
Pin
Amanda V. Shane is a Colorado native and fully admits to being a library dork growing up. To this day, she loves the smell of book paper on an almost fetish level (okay, maybe not, but that gives you a peek into the dark and twisted mind of this author). One of her first book romances came at the age of nine when, in a far back aisle, she found the story of King Arthur and was entranced by the blood purple canvas cover with gold leafing (she likes shiny things.)
Since then, she’s been hooked on stories with magic, mythical beings, daring heroes and, of course, desperate romance.
She writes paranormal and fantasy romance from her home where she lives with her family and a Bassett hound who she routinely has to fight for the “soft” end of the couch to set up with her laptop. She likes chocolate, wine, coffee and kids, in no particular order.
Sharon Stogner at 12:30 AM
Share