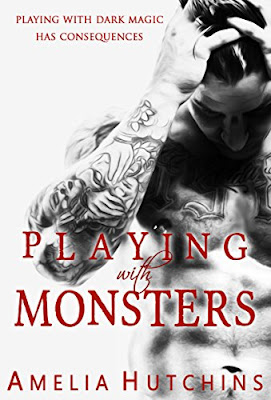 by Amelia Hutchins
June 28, 2016
514 pages
My coven has remained hidden in the shadows for centuries.


We found protection in the Colville National Forest, nestled in a town protected


Our powers are locked by an ancient curse, one meant to protect us from being found.


Until now.
The past has a way of repeating itself. A new game is beginning. No one is safe.
He’s coming for me.
He’s hunting.
The monster we’ve run from for centuries has found us.
How far will this deadly game go?
How far will I be able to take it, or will he destroy me and everything I care about?
Will the one thing I can’t live without, be the key to destroying and undoing the past?
Or will the past destroy me before I can save the people I love from what I’ve done.

Warning:
About the hero: chances are you may not fall instantly in love with him, that’s because I don’t write men you instantly love; you grow to love them. I don’t believe in instant-love. I write flawed, raw, caveman-like assholes that eventually let you see their redeeming qualities. They are aggressive, assholes, one step above a caveman when we meet them. You may not even like him by the time you finish this book, but I promise you will love him by the end of this series.
About the heroine: There is a chance, that you might think she’s a bit naïve, or weak, but then again who starts out as a badass? Badasses are a product of growth and I am going to put her through hell, and you get to watch her come up swinging every time I knock her on her ass. That’s just how I do things. How she reacts to the set of circumstances she is put through, may not be how you as the reader, or I as the author would react to that same situation. Everyone reacts differently to circumstances and how Magdalena responds to her challenges, is how I see her as a character and as a person.
I don’t write love stories: I write fast paced, knock you on your ass, make you sit on the edge of your seat wondering what happens next books. If you’re looking for cookie cutter romance, this isn’t for you. If you can’t handle the ride, un-buckle your seatbelt and get out of the roller-coaster car now. If not, you’ve been warned. If nothing outlined above bothers you, carry on and enjoy the ride!

Playing with Monsters is the first installment of Amelia Hutchins’ newest paranormal romance/urban fantasy series. This book was my absolute favourite summer read. I was totally hooked from start to finish, completely enthralled by the story of Magdalena Fitzgerald and the dangerously dominating Lucian Blackstone.

The reader is first introduced to Magdalena, a young witch estranged from her coven. Needing respite from a complex and heartbreaking set of circumstances, Lena leaves her coven to pursue a college program in botany. During her time away, Lena is haunted by enigmatic, violent dreams. Though she keeps a journal, the dreams are fragmented and difficult for Lena to decipher. When she is summoned home to participate in the Awakening, an initiation of sorts for young witches, Lena finds much has changed. Among these changes is the arrival of a mysterious and intimidating stranger, Lucian, a club owner who has been financially supporting the money-strapped coven. Lena quickly finds her life fatefully entwined with Lucian and she is unable to resist his persistent sexual advances. In him, Lena finds a darkness that speaks to the darkness she’s hidden away in her own soul. What Lena doesn’t fully grasp is that Lucian is a monster; a predator with a job to do and he’s not about to let a sexy young witch get in his way.

It’s been a long time since reading has become an obsession. I did little else but read once I started this book. At times the writing is a little reliant on cliched phrasing and relationship dynamics, however, the imaginative storyline and full cast of intriguing characters make up for otherwise subtle writing flaws. There are several layers of complexity to the plotline and a multitude of characters to manage. The series also intersects with Hutchins’ Fae Chronicles and Elite Guards Series. I’ve read Fae Chronicles, so I really enjoyed the cameo appearances of some of my favourite characters in this new series.

Lucian Blackstone is a book boyfriend in the tradition of Jericho Barrons. He’s an absolute ass, but altogether irresistible. Lena is strong a smart, but with a stubborn streak that can be downright frustrating. This book is off the charts sexy. The author even includes a warning at the beginning of the book. Personally, I found it fan-freaking-tastic, warning be damned! I’ve already started book two, Sleeping with Monsters. According to the author, this will be a four-book series. 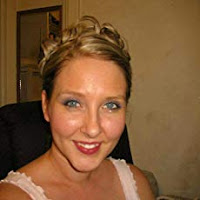 About the Author:
website-FB-twitter
Amelia lives in the great Pacific Northwest with her family. When not writing, she can be found on her author page, hanging out with fans, or dreaming up new twisting plots. She's an avid reader of everything paranormal romance.
Sharon Stogner at 12:30 AM
Share