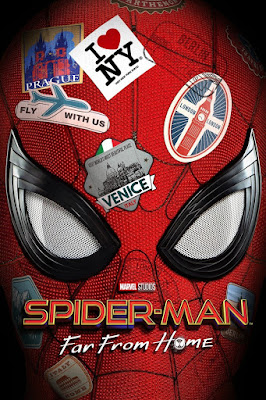 Runtime: 2h 9min
Genre: Action, Adventure, Sci-Fi
Following the events of Avengers: Endgame (2019), Spider-Man must step up to take on new threats in a world that has changed forever.

Went to see Spider-man: Far from Home with my husband and 18-year-old daughter. It lived up to the hype. We all enjoyed it...my daughter more so for reasons *Tom Holland*. But I have to agree with her. Tom Holland is the cutest little Spider-man ever. Brilliant casting.

Spider-man Far from Home is well written. It deals with the sad aftermath of Endgame for Peter Parker but also keeps the fabulous humor Marvel does so well. I really liked Jake Gyllenhaal as Mysterio.

This would have been a 5 sheep movie, but tech used by the bad guy just didn't seem plausible...I know, it's fiction but it stretched the capabilities of the Marvel universe tech a little too much for me.

This is definitely a must see for fans and see it on the big screen. Stay for the two after-credit scenes. There are pretty important for the whole MCU.