Welcome to the Bloodlust tour, book #2 in Pixie Britton's YA Science Fiction series, Kill or Cure. I have loads of fun stuff for you today! An exclusive excerpt, book trailer, a FREE book, and a chance to win a signed copy of Bloodlust! Wait, rewind...did I say FREE BOOK? I sure did! Read on! 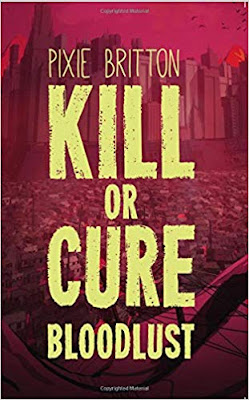 by Pixie Britton
February 21st, 2019
Genre: YA Sci-Fi/ Dystopian/ Zombies
He could save the world, or destroy it… The virus that has swept the Earth hasn’t consumed Tommy, yet, but as his hunger for human flesh takes hold, his humanity vanishes behind the bloodlust of an infected. It’s up to seventeen year old Alyx and her friends to find answers. But saving her little brother isn’t their only problem. Lurking in the shadows of Alhena is the formidable General Sinter, hell-bent on capturing the boy with unrivalled superhuman strength for his own personal gains. With limited options, Alyx has no choice but to risk everything to protect him. A choice that she could live to regret Kill or Cure: Bloodlust is the second book in the Kill or Cure series. Brimming with suspense, romance and heart pumping action!

Excerpt
Winter
“A look of intrigue flickers across Tyron’s face as he tries to take measure of this wild girl standing in the centre of his cage. To the untrained eye, Winter looks like an odd wild girl from the forest, and you wouldn’t necessarily know how deadly she is from first impressions. She’s slight in stature yet athletic and nimble, and it’s not until you’ve spent significant time with her that you can fully appreciate how skilful she is. Every single movement is deliberate and focussed, like she could switch into warrior-mode at the flick of a switch. I can’t help but grin internally when I realise that this monster-man has just met his match and he has absolutely no idea.”

Kill or Cure (book #1)
by Pixie Britton
February 4, 2018178 pages
Kill or Cure is a YA romance-infused sci-fi novel. It focuses on human relationships in an undead, apocalyptic world. A girl who will stop at nothing to protect her brother.

In a dystopian world ravaged by infection, society as we know it has fallen to the mouths of the dead. The remaining fragments of civilisation survive in walled compounds, scattered in the depths of the countryside. When her little brother becomes sick with a suspected flu virus, Alyx Silverthorne will do anything to keep Tommy alive.

With limited medical supplies and only herbal alternatives, his prospects of surviving this mystery illness are bleak. But saving Tommy is just the beginning. The infected are not the only monsters that exist in this new world, and human nature can be more destructive than the dead.

In a race against time, Alyx and her best friend Will stop at nothing to protect him, even from the same people that swore to protect them all.

Kill or Cure is a dynamic, multifaceted story of teenage love and gut wrenching loss in a dystopian world.

Download your FREE copy of the Last Sacrifice: A Kill or Cure story today…
A world infected. A man’s quest to save his family. One impossible choice.

The mission was supposed to be simple; to find survivors and kill the infected. But when Lieutenant, Joe Hudson, discovers that the home of his family has been destroyed by the infected, he’s left with an impossible decision. A choice that could change his life forever. With limited ammunition and morale hitting an all-time low, the survival of the squad rests on a knife edge. Joe has no choice but to turn to his girlfriend, Suzie, a fellow soldier and secret lover for support. Together they have to cross a line to save his family, but even in this new world where the dead roam the earth, there are some lines that should never be crossed. Joe’s loyalty to his squad will be tested and the ultimate sacrifice will be made. Set in the same world as the thrilling YA series Kill or Cure, follow Victory Squad in this fast paced prequel. Filled with love, heartbreaking loss and zombie guts.

About the Author:
website-FB-Twitter

Instagram
Pixie Britton is a British indie author and Wattpad extraordinaire. Her debut YA novel Kill or Cure, gained international success online with over 100k reads within five months of initial publication. Shes lives in Essex, England with her husband and adorable furbaby. One day she dreams of leaving her job as a Treasury Analyst in the city, to become a full time author and creative entrepreneur. Check out her website https://pixiebritton.com/ and sign up to her mailing list to receive the latest book release information.

As if a free book from the series isn't enough, the author is also giving away a SIGNED copy of the book! All you have to do is enter below!
a Rafflecopter giveaway