Magic in the World of Rayden Valkyrie


Magic is a significant part of the world of Rayden Valkyrie, where it is most often referenced as sorcery. It manifests in an array of forms throughout the stories that have been told so far (including the Ragnar Stormbringer Tales).

It is a bit of an irony that both of my primary characters in this world, Rayden Valkyrie and Ragnar Stormbringer, are not users of magic and tend to be antagonistic toward it. They do not place their trust in it, as both understand that the sorcery of their world is closely intertwined with the supernatural.

The world that they inhabit features a wide array of supernatural beings and creatures, in addition to supernatural realms that can be accessed through sorcery. Numerous religions abound, most of them polytheistic, with a fair number of them involving darker gods that thrive on blood sacrifice.

For those in this world exploring darker arts, or serving the more malevolent deities and entities, blood sacrifice is the strongest power source. The things of the abyss have an insatiable hunger for life energies. They reward sorcerers and priests through bestowing them with the ability to command supernatural entities and channeling dark energies for them to wield.

The use of supernatural servants often has a similar appearance to the use of dark energies, in terms of the outcomes desired by the sorcerer/practitioner.

The dark sorcerers and priests also make use of sexual magic to generate and accumulate energies to wield in their arts, though blood sacrifice is far more potent, especially when things of more innocent natures are the object of sacrifice.

There is also magic, or sorcery, that is good in nature.

Ritual and intent play key roles in magic of a benevolent nature. This kind of magic makes use of natural energies that exist in the world to heal, project sight, travel in a non-corporeal form, and shield against dark sorcery.

It is not magic that can be used to harm someone, so it is a little more limited in that respect. However, these kinds of energies can be drawn from deep within a benevolent soul, where the dark sorcerer is hollow inside, and must rely on outer sources.

There are some kinds of sexual magic along this part of the spectrum too, but they tend to be restorative and healing in nature, versus the predatory, life energy consuming version used by the dark sorcerers.

Due to the discipline it takes to develop benevolent magic, there tend to be far fewer highly-skilled practitioners than there are of dark magic, with its easier paths to power through blood sacrifice.

Dark and light energies in this world also have a tendency to pool wherever they have been created or gathered, whether through willful exercise of magic or major events, to the extent that physical places can be heavily affected by the energies long after the ones who wielded and gathered them are gone.

These locations serve as sources of power for other sorcerers, and they attract beings of a similar energy nature. This is why dark entities and spirits in this world often take up residence in places where great evil has been committed, or sites where dark magic was once practiced intensively.

Ultimately, the magic is based on energies; those in the physical world and those from the supernatural realms.

The accumulation, channeling, and release of these energies to serve certain intentions is the art of the sorcerer, whether of a dark or light nature. The energies can be depleted, gathered, and cultivated using various methods, but the structures in place prevent them from overwhelming the world outright, as many darker deities would seek to do.

I invite readers to explore the many varied uses of magic in the world of Rayden Valkyrie, in addition to everything else that exists within her diverse and fascinating world!

Take a journey east with Rayden Valkyrie as she undertakes one of her most harrowing adventures yet! Prowling the Darkness is the latest release in the Rayden Valkyrie Tales!

A return to hard-hitting, gritty sword and sorcery with an iconic and inspiring main character, the Rayden Valkyrie Tales are a growing collection of stand-alone novellas that will elate fans of the genre! 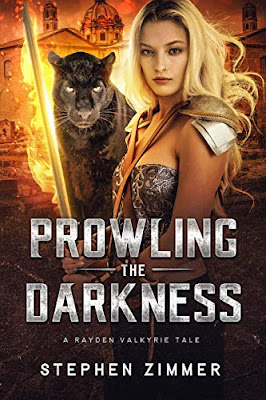 Prowling the Darkness: A Rayden Valkyrie Tale
by Stephen Zimmer
May 10, 2019
120 pages
Dark rumors and whisperings of unholy sorcery bring Rayden Valkyrie to the remote city of Sereth-Naga.

There she finds a populace cowering in fear of the city’s ruthless, mysterious rulers, who remain behind the high walls of their citadel.

An even greater mystery surrounds the city.

Something is prowling the darkness.

Something that has kept the enigmatic rulers for centuries from escaping Sereth-Naga to spread their wickedness to other lands.

Prowling the Darkness is a stand-alone novella that is part of the Rayden Valkyrie Tales. 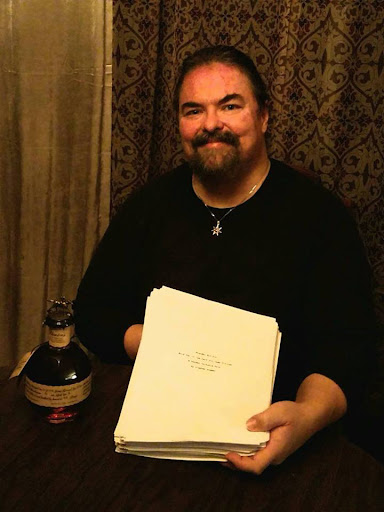 About the author:
Website-FB-Twitter
Instagram
Stephen Zimmer is an award-winning author and filmmaker based out of Lexington Kentucky. His works include the Rayden Valkyrie novels (Sword and Sorcery), the Rising Dawn Saga (Cross Genre), the Fires in Eden Series (Epic Fantasy), the Hellscapes short story collections (Horror), the Chronicles of Ave short story collections (Fantasy), the Harvey and Solomon Tales (Steampunk), and the forthcoming Faraway Saga (YA Dystopian/Cross-Genre).

Stephen’s visual work includes the feature film Shadows Light, shorts films such as The Sirens and Swordbearer, and the forthcoming Rayden Valkyrie: Saga of a Lionheart TV Pilot.

Stephen is a proud Kentucky Colonel who also enjoys the realms of music, martial arts, good bourbons, and spending time with family. 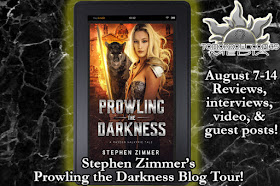