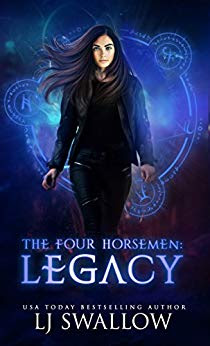 by LJ Swallow
August 9, 2017
Pages: 154
What's worse than being pursued by The Four Horsemen? Discovering you're the Fifth.

Vee's day switches from mundane to disastrous when she runs down a stranger with her car. Fortunately for Vee, she can't kill Death. Death, who just happens to be one of the Four Horsemen--and he's looking for her.

Vee is pulled into a new life with four dark and dangerous men fighting demons, vampires and fae. Not what Vee had planned, but a hell of a lot more interesting than her boring job in tech support.

So what happens when the unbreakable bond of the Five takes control in a way none of them expected?

Have you discovered The Four Horsemen series?
Prepare to follow the lives of Vee and the Four Horsemen through addictive books filled with action, paranormal suspense and magic. Start the series with Legacy and discover why readers have fallen in love with the books--and the Horsemen! The series contains strong language, slow burns to steamy scenes, and has a kickass heroine with four guys who'll do anything for the girl who's the centre of their world.

Please note: This book is written in British English and contains spelling, idiom and grammar which may appear incorrect to some readers.


The Four Horsemen series is complete

Verity spends her day working for a telecommunication company where she basically keeps to her self and does her work. She struggles with social cues sometimes because she is honest to a fault and just because someone asks your opinion doesn’t mean they want the truth. One-night Vee is on her way home, it’s dark and raining when she accidentally hits a man. She is shocked when it turns out to be a new employee from work. Vee is suddenly pulled into a mysterious world that she isn’t even sure could possibly exist.

The characters have a magnetism to one another that keeps the sparks flying between them. Book one seems to lay the foundation for the rest of the series which promises to be worth the time to read.

About the Author:
website-FB-twitter


Giving in to her dark side, LJ spends time creating worlds filled with supernatural creatures who don't fit the norm, and heroines who are more likely to kick ass than sit on theirs.
Sharon Stogner at 12:30 AM
Share