On the 4th episode of Reality TV’s new and controversial hit show, The Breakfast Club, “The Preacher’s Kid” Lyric finally found out she was pregnant. The first episode of the reality show was a first for television. After a night of heartbreak, lots of alcohol and bad decisions, a night Lyric claims not to remember much of, she conceived the child almost completely on camera. The father of the child is the seemingly dimwitted “Wannabe” Anthony who “forgot” to practice safe sex.

At the end of the hour Anthony confessed to cameras that he was worried that Lyric was going to fall in love with him and that he regrets having given into her sexual advances. And that while "she's cool and all" he didn't want to be in a relationship with her. Lyric herself seemed to agree that a relationship with Anthony wasn't desirable. In fact, earlier in the episode it was clear her heart and mind were already spoken for by another.

After last night's episode aired, Lyric took to Facebook to vent her frustration and to warn viewers not to be fooled by her baby daddy's assurances. Says that “he doesn’t give a damn about” the child she’s carrying and calls him “bitchmade” and a “fake thug.” After his manhood was attacked, Anthony responded by saying that the only reason he had sex with her was because he “felt bad” for her and warned her not to bring another man around his child. The argument then goes to the question of when his responsibility for the baby begins.

The preview of the season moving forward shows that the drama between the two is just getting started. 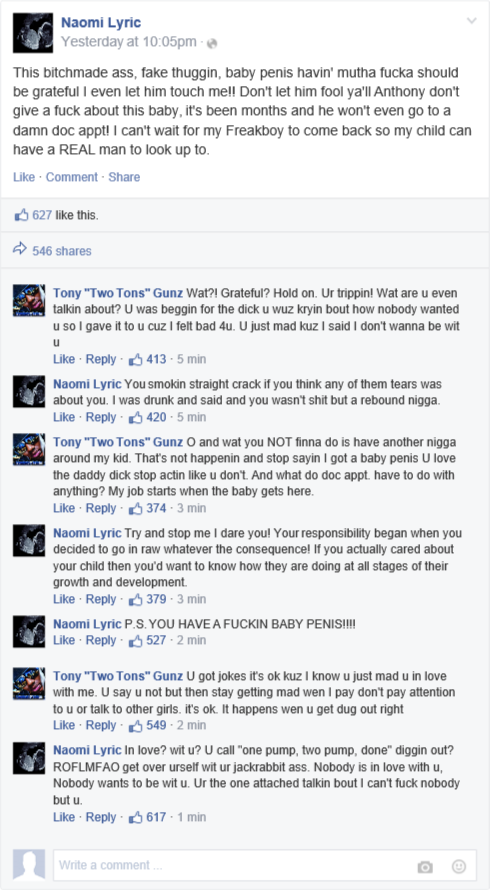 Is Lyric being unfairly harsh in her predictions?

Or is Anthony primed to be yet another uninvolved father?

Sound off in the comments below. 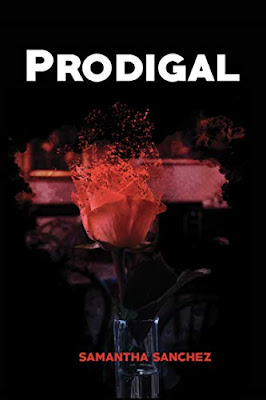 by Samantha Sanchez
January 13, 2019
Genre: Contemporary Urban Fiction
Lyric is 21 years old and bored with the inhibited lifestyle of endless church activities she’s been forced to participate in since childhood. When she is offered the opportunity to be on a reality show, she jumps at the chance to move in with five strangers under the premise of pursuing further education. However, a surprise pregnancy causes her life to take an unexpected turn. Being overlooked and pushed to the side by her child’s father coupled with his lack of consideration cause her insecurities to deepen, while her pains and humiliation are documented for everyone to see. The show becomes a hit and she a star but now she has to find a way not to let the pain she feels destroy her heart and poison her soul. Imagine the most embarrassing and hurtful moments in your life being put on display for the entire world to see. You’re trying not to lose your mind and keep your composure while your social media is flooded with criticisms from people who have no idea what you’re really feeling but only know what they see on TV. The people who do know the people who are there with you every day offering “support” consistently invalidate your feelings. You’ve heard of the Kardashians now meet Lyric.
Goodreads-Amazon

Excerpt
A few hours later, I was annoyed, but the rest of the evening went by smoothly, nobody got cussed out. Christopher and Athena got some homework done, DeVon had obviously abandoned the suicide trip he was on earlier and was clowning around with Monroe, wondering aloud what kind of child my baby would be. Monroe agreed with Trey that he hoped the baby looked like me and not Anthony. I got a little offended when they said that the child would act as stupid as him. They said that Anthony always boasted he was the “freshest nigga alive” so my baby, if it was a boy, would boast that he was the “freshest ​lil nigga alive.”

I eventually separated myself from them. I was curled up in the alcove upstairs reading The Ramayana for my Mythology class. I was engrossed in this story of a Prince named Rama going through Hell and high water to rescue his wife Sita who had been tricked and kidnapped by the monster Ravana.

Anthony asked coming up the stairs. That’s how he addressed me. He never said my name I was always “Ay”.

“I have nothing to say to you.” I said picking up my cup of orange juice and taking a sip .

“We need to talk about this.” He insisted sitting on the end of the bench by my feet.

“There’s nothing to talk about.” I argued “I’m pregnant. That’s that. Bye now.” I said gently kicking him to get off the bench and out of my space.

“Come on, please. We need to talk about this.” I’d never seen him so serious in the entire month I’d lived here and he’d never said please.

“Talk about what?” I asked annoyed.

I gave up trying to read, I laid the book down and scooted upright. I had to hear this pile of delusional bull that was coming out of his mouth. “What are you talking about?” I asked.

“DeVon lied to you. I like you and all but I don’t want you. If you want to be there for the baby then cool but I’m not going to force you.”

I didn’t have the energy or inclination to make a man handle his responsibilities. I’ll let the courts do it for me when I file for child support. “That guy you brought in here today was that your ex boyfriend?”
“No.”

“Oh DeVon said that he was your ex boyfriend.”

“Did you have sex with him?”

“None of your business.”

“It kinda is my business, you said you having my baby and now this nigga sayin he’s daddy.”

“No what he said was, the baby would call​ him daddy instead of you. Not that it was his baby.”

“What did he mean my baby finna call him daddy though? If that’s my seed then why would it call another dude daddy?”

I rolled my eyes “He meant that he doesn’t expect you to step up so he’s going to.”

“That’s my child though.”

“And my kid isn’t going to be callin’ another nigga daddy, that’s what’s not going to happen.”

“So you gonna step up then?”

He paused before he answered, “Honestly, I’m not ready for a baby right now.”

“You think I’m ready for this?”

“I don’t know, but I just got a lot going on in my life right now.”

“Ok look, I’m wanted for murder back in Brooklyn.”

“Murder?” I asked in disbelief, trying not to laugh. This dude ain’t wanted for no murder. I don’t know him that well yet but I know that he’s not bold enough to take a life. If he​ was that bold, is he really stupid enough to talk about it on camera?

“Yea, well what had happened was….”

That’s how you know he’s lying! I laughed. When a dude starts a story with “What had happened was….” Man shut the hell up. Your soft ass ain’t foolin nobody.

I felt the annoyance rising in me. I had no patience for him at all. “I don’t care, that has nothing to do with what is going on with our situation. I need to know if I can count on you for support during this pregnancy or not.”

“I mean...yea I can support you, I just don’t want to be in a relationship right now. We can still be cuddy buddies though you do got some good p---y.”

I picked my book back up hoping he would take the hint and leave. He didn’t.

“Hey are you gonna f--k that Freakboy, dude?” He asked after a minute.

“That’s none of your business.”

“Excuse me?” I asked daring him to repeat his command.

“That’s mine.” He said pointing to the lower half of my body

“No, it’s mine.” I insisted “And I can give it to whomever I damn well choose”

“You tryin to tell me who I can and can’t have sex with, is some relationship type s--t.”

“You got my seedling inside you.” He said

“And? That makes you my baby daddy ​not my man.”

“I know, I’m just sayin...I don’t want the DNA to get mixed up and then you not know who the father is. That’d be horrible.”

I paused and looked at him in astonishment. Did he really just say that? Is he serious? Is he that slow? He gotta know that’s not how it works.

“What?” he asked at my dumbfounded expression. I didn’t even dignify it with a response. I grabbed my orange juice, and my book and I walked away. It was too outrageous. I was speechless.

About the Author:
website-FB
A native of San Diego, Samantha Sanchez is currently finishing a degree in psychology as well as in social and behavioral science. Having a background in both church and drama, she hopes to use her degree and creativity to reach and relate to many people in her community and beyond helping them learn to understand themselves and each other.