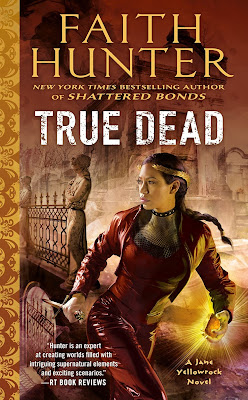 True Dead (Jane Yellowrock Book 14)
by Faith Hunter
September 14, 2021
Jane Yellowrock goes back to the city where it all began in the newest installment of this thrilling New York Times bestselling series.
Jane used to hunt vampires, but now she’s their queen. She’s holed up in the mountains with the Yellowrock Clan, enjoying a little peace, when a surprise attack on her people proves that trouble is brewing. Someone is using very old magic to launch a bid for power, and it’s all tied to the place where Jane was first drawn into the world of Leo Pellissier—the city of New Orleans.

Jane is compelled to return to NOLA because someone is trying to destabilize the paranormal world order. And because she now sits near the top of the vampire world, the assault is her problem. She will do what she must to protect what’s hers. Her city. Her people. Her power. Her crown.
Amazon-Barnes & Noble-Books-a-Million-IndieBound-The Book Depository-Kobo-Google Books-Apple Books
Excerpt #4
(Beast)
Beast growled low, showed killing teeth again, eyes still on Koun. Sat with cow meat between claws. Ripped cover off meat and spat to floor. Tore meat off. Ate. Swallowed. Ate chunks. Water-blood ran across floor.

“You are angry. So, the messy kitchen is a lesson for Eli. What are you going to do to George? Hack up a hairball onto his pillow?”

“Tell me, Vengeful Cat. Would you like to join the vampire hunters? The Chief strategist of Clan Yellowrock would be happy to follow you into battle.”

“Do you go in cat form, or do you shift into Jane?”

Most vampires and humans in Winter Court of Dark Queen did not know the I/we of Beast was not always Jane. Most did not know how to talk to not-human-forms. Koun knew how to talk but did not always act with knowledge. Koun asked two questions at one time. Could only ask one. Beast waited. Stared at Koun.

Beast licked paws and muzzle free of blood, rough tongue getting all blood and meat-bits from paws and toes and off pelt. Shook head no.

Beast looked at office area. Met Brute eyes, blue as sun on ice. Brute shook head and went back to big mattress in office corner. Turned three times and curled into ball with lizard. Beast raced up stairs and into sleeping room. Went to place where Bruiser kept clothes. Nosed open door. Found Bruiser best shoes for dancing. Carried one to empty room and hid in empty closet. Could bite holes in dead-cow-skin-shoes with killing teeth, but did not want to make Bruiser sigh. Hiding shoe was enough. Chuffed. Padded back to bedroom, to bathroom, and leaped into place where humans lay in hot water. Was cold on Beast belly. Took claws off of Jane.

What the heck are you doing? Jane shouted at Beast.

About the Author:
website-FB-twitter
FB fan group
yellowrocksecurities.com
www.gwenhunter.com
Faith Hunter is the award-winning New York Times and USAToday bestselling author of the Jane Yellowrock, Soulwood, Rogue Mage, and Junkyard Cats series. In addition, she has edited several anthologies and co-authored the Rogue Mage RPG. She is the co-author and author of 16 thrillers under pen names Gary Hunter and Gwen Hunter. Altogether she has 40+ books and dozens of short stories in print and is juggling multiple projects.
She sold her first book in 1989 and hasn’t stopped writing since.
Faith collects orchids and animal skulls, loves thunderstorms, and writes. She likes to cook soup, bake bread, garden, and kayak Class II & III whitewater rivers. She edits the occasional anthology and drinks a lot of tea. Some days she’s a lady. Some days she ain't.
Tour-wide Giveaway!
Enter to win some fabulous prizes! Giveaway is open to US residents only.
● 3 winners will receive a bag of Faith’s tea blend + a signed manuscript revision page
● 3 winners will receive a signed manuscript revision page
a Rafflecopter giveaway